Learning to Hear With Their Brains

Angelica laughs, and holds a small shaker near her ear – noting its sound. The bubbly three-year-old looks like any... 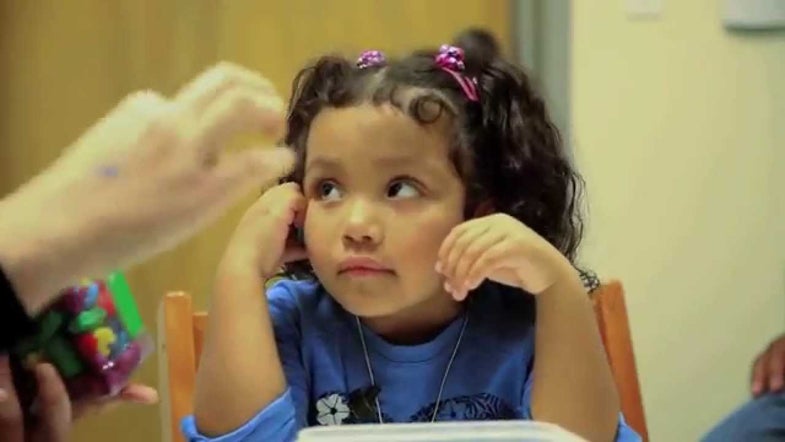 Angelica laughs, and holds a small shaker near her ear – noting its sound. The bubbly three-year-old looks like any other child, but the simple act of reacting to sound is new to her. The curly-haired girl was born without working auditory nerves.

She’s part of a clinical trial happening now to test auditory brainstem implants – electronic devices implanted into the brain that deliver stimulation to the brainstem itself, completely bypassing the ear.

So far, the trial, based at the University of Southern California, has enrolled five children from 2 to 5 and implanted the devices in four of them as part of a three-year study into how the kids develop language after the surgery. They plan to test the procedure in 5 more over the next few years.

Audiologist Laurie Eisenberg points out that with the device, the child still needs to undergo a lot of therapy and support from their families. “The initial activation of device is analogous to a newborn hearing for the first time,” said Eisenberg. The kids hear a garbled mix of sounds, but their brains haven’t been primed to understand them – a skill that takes time and effort to develop.

Doctors have to do surgically implant the device – including a 21-electrode array that measures 8mm by 3mm — deep in the skull, on exactly the right spot on the brainstem. Auditory brainstem implants are approved for kids over the age of 12, but this is the first time they’ve been used for younger children in the U.S. The kids in the study couldn’t use cochlear implants because of their particular anatomy.

In order for the language centers of the brain to develop normally, children need tons of input – studies have shown that children who hear fewer words per day are slower to develop vocabulary skills than kids who hear more. And for deaf children living in households with parents who hear normally, the amount of sign language they get can be small.

Brain surgery isn’t to be undertaken lightly, especially in such young patients. But if the child were not implanted at all, the children are incredibly disadvantaged by their deafness, Nan Ratner Bernstein, professor of Hearing and Speech Sciences at the University of Maryland, told a group of journalists at the AAAS meeting in San Jose last week. “We have to remember that without these kinds of technologies, this is a child that faces an uphill battle in life.”

If it proves safe and useful, the device could open up the opportunity to hear to hundreds of children in the U.S. and thousands more around the world, the team said.

In addition to helping people, auditory brain implants are shedding light on how sound works in the mind. The kids’ brains have to map out the sounds and unscramble them – something which points to the incredible plasticity of the brain. “It’s like learning how to see x-rays or detect electrical fields — something you can’t even imagine because you can’t do it,” said Robert Shannon, a professor at the Keck School of Medicine and investigator for the trial.

After only five months of having the ABI, Angelica is able to distinguish different sounds – for example, a cough from a dog’s bark. And she is starting to find her own voice.