Little travelers are plentiful in the Great Pacific Garbage Patch, but their ecological impacts are still a mystery. 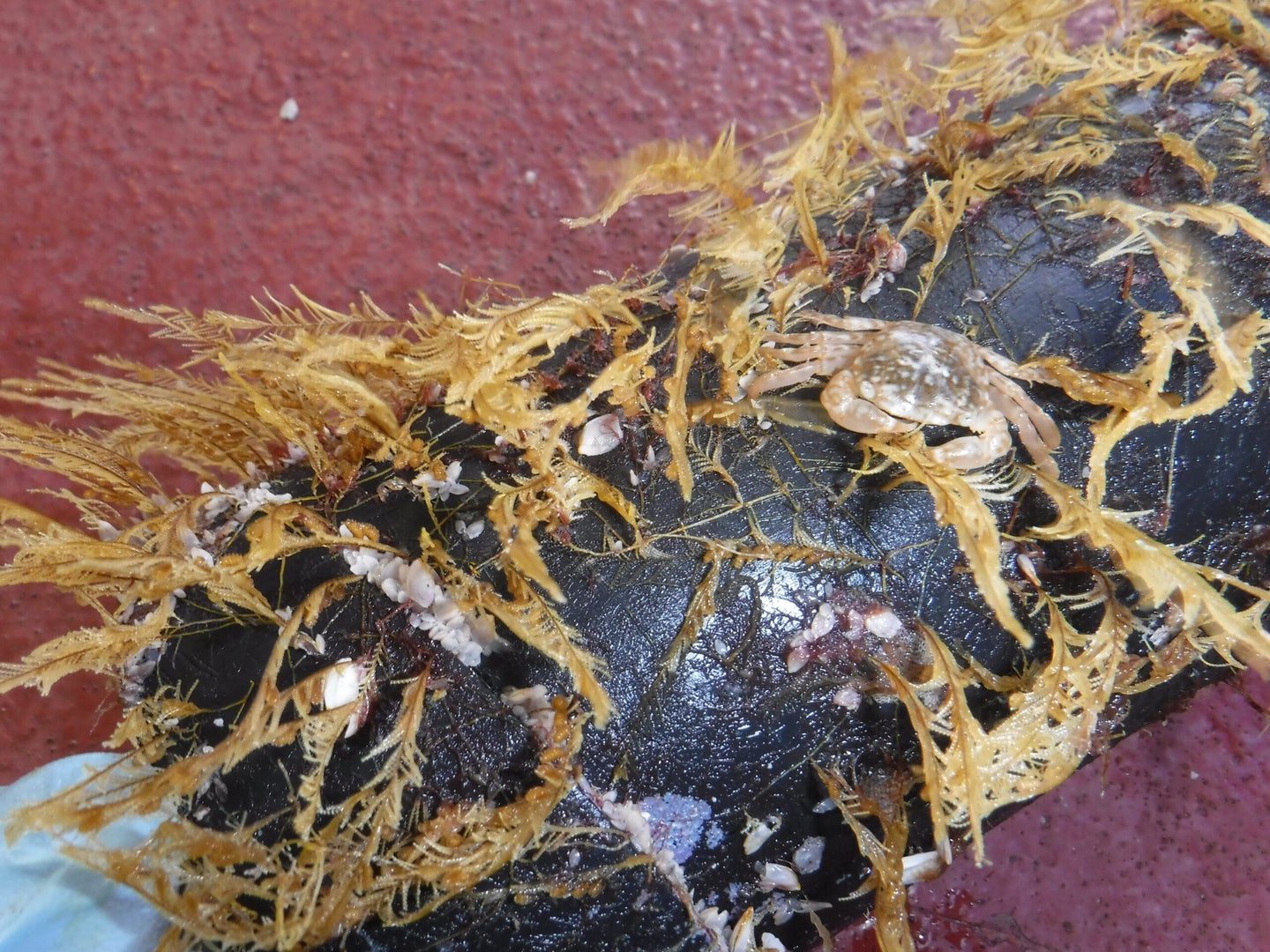 Every year, at least 14 million tons of plastic garbage enter the world’s oceans and cause all kinds of problems for the wildlife that eat, suffocate on, or become entangled within it. There’s also another consequence of all this trash for marine habitats that’s been mostly overlooked until now, scientists reported this week.

It turns out that coastal plants and animals are hitching a ride on the ever-growing deluge of plastic debris and traveling hundreds of miles from shore to create a new kind of ecosystem in the Great Pacific Garbage Patch, the largest accumulation of moving plastic debris in the ocean. Researchers identified a host of anemones and other species living within the rubbish, which allows the little creatures to thrive in an otherwise inhospitable environment. The coastal organisms may compete with local species and journey across the sea or be carried to the shore to invade new coastlines, the team wrote on December 2 in Nature Communications.

“There are so many questions at this point about what the ecological impacts are,” says Linsey E. Haram, a research associate at the Smithsonian Environmental Research Center and coauthor of the study. “If this is a common phenomenon across oceans, then we’re looking at an avenue for invasive species transport that’s really difficult to manage.”

Researchers have long understood that marine detritus such as floating logs and seaweed can ferry coastal organisms to islands and distant shores. But these rafts were generally rare and short-lived before the advent of durable, buoyant plastics. It was thought that coastal plants and animals would struggle to survive in the harsh conditions of the open ocean, where there’s often little food and shelter.

However, the glut of plastic that’s accumulated in the ocean since the mid 20th century has given enterprising critters new and more enduring opportunities to colonize the high seas, Haram and her team wrote. The massive East Japan Earthquake and Tsunami of 2011 offered a striking example of how this can happen. Hundreds of coastal Japanese marine species rode the debris released by the destruction over 6,000 kilometers (3,728 miles) to North America’s west coast and the Hawaiian Islands.

“We’re still finding examples of tsunami debris landing even in 2020 and 2021,” Haram says. “It really opened our eyes to the fact that plastics in particular can be really long-lived as floating debris, which opens up opportunities for some of these rafting species to be out in the open ocean for extended periods of time.”

Much of the waste washed out to sea by the tsunami ended up in the North Pacific Subtropical Gyre, better known as the Great Pacific Garbage Patch. The gyre, which lies between Hawaii and California, is formed by rotating ocean currents and has, over the past 50 plus years, become a reservoir for plastic litter of all sizes.

[Related: The great Pacific garbage patch is even trashier than we thought]

Haram and her colleagues wanted to find out whether any coastal marine life from the tsunami was still clinging to this trash. They worked with the Ocean Voyages Institute, a nonprofit that cleans up plastic pollution, and volunteers to collect debris larger than 5 centimeters (about 2 inches). The researchers then combed through samples of the garbage—which included buoys, derelict fishing gear, and household items such as hangers and toothbrushes—for signs of life.

They found coastal species attached to well over half of the plastic pieces they examined, and many were species that typically thrive in eastern Asia. Among them were anemones, brittle stars, barnacles, shrimp-like crustaceans called isopods, seaweeds, and even coastal fish that were “corralling around or on these floating plastics,” Haram says. “It really creates a little raft of life.”

Alongside the coastal creatures were organisms that have evolved to settle on marine floating debris or animals. These open ocean dwellers included gooseneck barnacles, crabs, and filter-feeding animals called bryozoans. Intriguingly, Haram says, these native rafters were actually less diverse than the array of coastal species her team identified.

The findings suggest that the blend of lifeforms thriving on plastic rafts in the middle of the ocean are a community in their own right, says Henry S. Carson, a marine ecologist at the Washington Department of Fish and Wildlife who wasn’t involved with the research.

“You’ve got this mix of species that are evolved to be [in the] open ocean and evolved to be coastal, and now they’re mixing on this new kind of habitat,” he says. “I couldn’t predict what will happen, but it’s fascinating.”

The two groups do seem to be competing for space, but beyond that it’s not clear yet how the coastal species interact with their neighbors or what they’re eating, Haram says. She and her colleagues are also investigating whether the new arrivals can actually reproduce and sustain their populations in the open ocean.

“To figure out how much of this community is persisting on its own and how much is being constantly imported from the coast…would be a natural and very interesting place to go,” Carson says.

[Related: This luxurious fabric breaks down in the ocean without leaving a trace]

Another key question is whether these communities form in other oceans. It’s also important to investigate the extent to which plastic rafts carry invasive species to new habitats, points out Carson, who has previously identified organisms that cause disease in corals on plastic debris from the Pacific Ocean.

It’s likely that these rafting communities will only become more prevalent in the future as the amount of plastic dumped into the sea continues to grow, and flooding and destruction along coastlines worsens due to increased storminess driven by climate change, Haram and her colleagues concluded.

“We’re looking at more opportunities for inoculation of plastics into our oceans, and what that will mean for open ocean communities time will tell,” Haram says. “But we can expect to see more and more plastic ending up in the middle of the ocean and if our research is any indication that may mean more coastal species as well.”

Correction: 12/7/2021; A previous version of this story incorrectly credited Smithsonian Institute in the opening image, which is incorrect. Credit should have gone to The Ocean Cleanup. The image caption has also been updated to clarify that not all hydroid animals are coastal.