Researchers hope to map the path of bird flu and other pathogens. 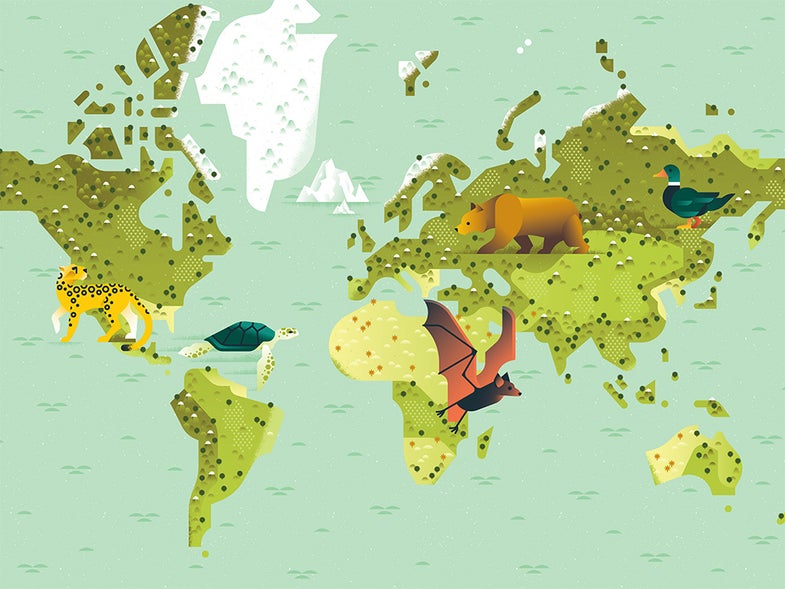 Tracking wildlife has improved our understanding of animal activities such as migration and hunting. Yet most species remain invisible to biologists. Transmitter devices that exceed 5 percent of an animal’s body weight can negatively impact its behavior and chances of survival. Size concerns put the vast majority of animals—including an estimated 75 percent of the world’s mammals and birds—off-limits.

Martin Wikelski, head of the Max Planck Institute for Ornithology near Konstanz, Germany, hopes to change that. This summer he started distributing tags weighing just 5 grams, or 0.17 ounce, to researchers ready to place the trackers on thousands of birds, baby sea turtles, and even eels.

Dubbed ICARUS, for International Cooperation for Animal Research Using Space, the project could also create what Wikelski calls “an internet of animals.” In the same way that signals from thousands of cellphones yield traffic patterns, so the data swarm from critter tags might help us understand and halt the decline of migratory species, map how pathogens like bird flu spread, and perhaps even prove certain species as an early-warning system for natural disasters such as earthquakes and volcanic eruptions. Here’s a look at the tracker tech and pilot programs.

In Russia, researchers want to know what happens to orphaned bears they raise and release back into the wild. Ear-tag ICARUS transmitters on brown and Asiatic brown cubs will be safer than neck collars, and their solar cells don’t require that scientists recapture animals to recharge the units.

Ducks migrate southward from breeding grounds in Siberia to warmer winter spots each year. Because they carry pathogens, understanding their movements is critical to global health. “The body temperature of ducks in China can help tell us if a bird flu outbreak is beginning,” Wikelski says.

Fruit bats in West Africa can cover hundreds of miles in their search for food. Monitoring them will help researchers illuminate the creatures’ role in spreading seeds and pollinating plants—and perhaps pinpoint where some of the diseases they carry, such as SARS and Ebola, originate.

Researchers know where sea turtles hatch and where they return to as adults a few years later. But the span in between has been considered lost time because the infant creatures were too small to tag and their later development went unmonitored. Now it will be easier to locate and protect them.

In inhabited areas of Panama, adolescent jaguars searching for a territory to call their own often come into contact—and conflict—with humans who already live there. ICARUS tags will help biologists understand how these immature cats deal with roads, people, and urban spaces.

Animals aren’t the only possible use for the tags: Glaciologists want to monitor retreating ice. “All the ICARUS system does is transmit information,” Wikelski says. “What kind you feed in is up to you.” Ecologists might also track tree growth in the remote Amazonian rainforest.