Archive Gallery: Classic Car Advertisements from the Pages of PopSci

The good, the bad, and the hideous 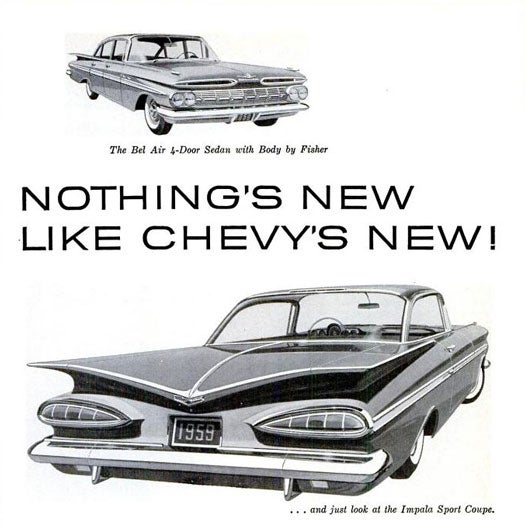 It’s not often that you flip through a copy of Popular Science without seeing something about cars, be it a feature on eco-friendly automobiles, a compendium on futuristic concept designs, or an article on crackpot DIY vehicles. If you look carefully through older copies of the magazine, you’ll spot charmingly-illustrated advertisements tucked between the aforementioned stories — and in most cases, they serve as a surprising testament to that decade’s culture, as well as to the beauty of (most) vintage automobiles.

As the image above shows, some of these ads are as nostalgic as the cars themselves. We begin in the early 1930s, just after the stock market crash threatened to shatter the American car industry. To ensure continued sales, brands like Chrysler, Ford, and Chevrolet produced budget-friendly vehicles that would retain their quality even when sold second-hand. During that period, our advertisements reflected our readers’ practical sensibilities; we focused on durability over aesthetics and slapped images with bargain prices. A Plymouth for just $485? How could anyone refuse?

The war and post-war era marked an appeal to family values and consumers’ new-found taste for luxury. Buy the “Knee-Action Chevrolet” to give Junior his first comfortable car ride! Drive the European-looking Studebaker to enjoy a “far-advanced new flight into the future!” We even catered slightly to the 1960s counterculture movement, as evidenced by the groovy aesthetic our ads took on once Volkswagen’s Type 2 “minibus” became the hippie vehicle of choice.

After the stock market collapsed in 1929, Chrysler touted its Plymouth line as America’s “best engineered low priced car” — and with a starting price of just $485 for a used Standard Plymouth, these automobiles were practically a steal even for struggling households. Advertisements like these ones were so effective that Plymouths became the third most-popular car by 1931, and was later counted with Ford and Chevrolet as the top low-priced vehicle brand. The model pictured on the left was not only durable, but it featured Chrysler’s famed floating power, which attached the car engine to its chassis to reduce vibration.

The appeal to domestic bliss continued well in the late 1930s, when Chevrolet unveiled its 1937 Chevrolet Master and Master Deluxe. The $26 million revamping went a long way: designer Jules Agromonte not only included knee-action shock absorbers, but he gave the two-door sedan a body of steel, thus reducing the car’s weight by 150 pounds. The Master model cost between $619 and $725, which contributed to a slight dip in Chevrolet sales as the economy continued to worsen.

As far as car designs go, the 1953 Studebaker Starliner coupe was practically a work of art. At a height of less than five feet, the sleek Starliner bore a greater resemblance to European automobiles than American ones, which favored a geometric design unlike the Starliner’s sloping silhouette. Studebaker was so enamored with this model that they marketed it with the tagline, “a far-advanced new flight into the future.” Unfortunately, the Starliner stumbled into a few problems once it went into production. Its engine didn’t quite fit into the frame, but corrections to the design only made the Starliner more prone to developing rattles.

Today, the Bel-Air 4-door sedan and Impala Sport coupe are two of the most sought-after collectibles, and for good reason: those tailfins are out of this world. We boasted that they included wider seats, “loungelike comfort,” and a new Magic Mirror finish” that promised to eliminate the need to wax and polish. You can’t tell from the illustration, but the Impala also came with a “Speedminer,” or a device that buzzed if you passed a pre-determined speed limit. As expected, these two vehicles were far more expensive than the Depression-era family cars. The Impala Sport Coupe cost almost $3,000, while the Bel Air cost around $2,000.

This page advertised four Chevrolet offerings: the Impala SS Coupe, the Chevelle Malibu SS Coupe, the Corvair Corsa Sport Coupe, and the Chevy II Nova SS Coupe. A few notable features on each: the Corsa came with an optional 180 hp turbocharged engine, the Chevelle SS went down as Chevrolet’s first foray into muscle cars, while the Chevy II completed its transition from compact car to muscle car. Despite the Chevy II’s makeover, the slick ’65 Corvair completely overshadowed its popularity. It is now commonly remembered as the the one GM car that experienced a decline in sales that year.

Car advertisements took on a distinctively groovy aesthetic once we entered the 1960s, when General Motors introduced its first Chevrolet Van. The first-generation ChevyVan debuted in 1961 as a competitor to the Ford Econoline and Dodge A100. There was a strong demand for compact vans, and the Chevy’s roomy interior certainly appealed to families who anticipated hauling luggage back and forth between seasonal vacations. The design didn’t change much between 1961 and 1965, except for the addition of seat belts, but its legacy continues in GM’s Chevrolet Express.

The Volkswagen Type 2, colloquially known as the “minibus,” “microbus,” the “hippiemobile,” and the “hippie bus” didn’t need a long introduction. As the short copy and prominent illustration show, the minibus’ popularity spoke for itself. Several years after its debut in 1951, the Type 2 was upgraded with a tailgate-style rear door, a fuel tank in front of the transaxle, and an extra tire behind the front seat. During the peak of its popularity, the van became a favorite for artistically-inclined hippies. Drive through California one day and see if you don’t spot a Type 2 with a psychedelic custom paint job.

During the 1960s, Volkswagen introduced its line of Type 3 and Type 4 models, which were built with a unibody make and a longer nose to accommodate a spare tire. The Type 3, also known as the Volkswagon 1500, is remembered as one of the first German series to use electronic fuel injection as standard equipment.

You might recall the Bradley GT as Liberace’s gold-painted vehicle of choice, but prior to its association with the entertainer, the Gt II was actually promoted as a kit car for the everyday man. Granted, its design was a little flashy, but assembling one of these fiberglass autos required some manual labor. The models were based on the VW chassis (hence the advertisement’s reference to the company), and the original sold over 6,000 units between the late 1960s and 1970s.

Hello, 1970s. The Datsun/Nissan compact pickup truck, advertised as the “Li’L Hustler Deluxe,” arrived in the United States in 1955 after debuting in Japan. The model pictured on the left is an early “King Cab” model, a popular vehicle in the early to mid-1980s. In addition to “gargantuan legroom,” early King Cab models offered single wall beds with rope ties and 11.3 cubic feet of storage space. Some countries sold four-door varieties of this truck, but there was no such luck in the United States.