An Electromagnetic Catapult For Hurling Planes Into The Air

The fastest way to get a plane off a ship 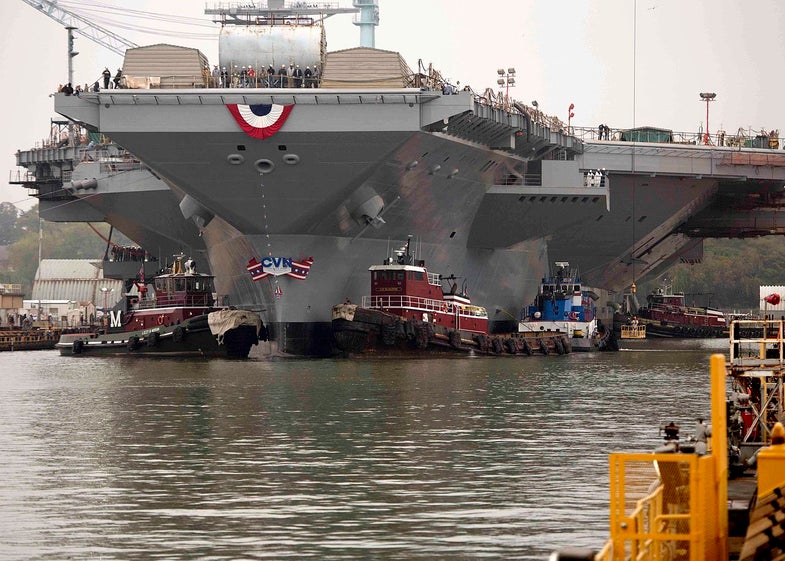 No runway is more limiting for a plane than an aircraft carrier deck. Getting to full speed and then taking off requires careful design, skilled pilots, and often a little kick from the deck of the aircraft carrier itself, all to prevent the otherwise tragic and expensive outcome of a plane launching off the deck and hitting water before catching sky. For decades, a steam catapult provided that extra little push off the deck, but now the U.S. Navy is testing a new, more powerful electromagnetic catapult to hurl planes into the air. Watch it launch below:

The tests took place aboard the Gerald R. Ford, the lead carrier in the Navy’s brand-new Ford class. Commissioning of the Ford is scheduled for next March. Before that happens, the Navy is testing features of the ship, like its electromagnetic catapult. The device borrows its name from the iconic medieval siege engines, which hurled objects into the sky at or over castle walls. These old catapults had a pouch on one end of a long wooden beam, with a large heavy weight at the other end. When the weight was released, gravity pulled it down, and the pouch on the other end flew upwards, stopping only as it hit a cross beam to release the deadly projectile. Catapults on aircraft carriers borrow this same basic mechanism, with force on one end pulling a cord to launch an object on the other end, but they look completely different, with only their names giving away the similarity.

Steam catapults used steam pressure to launch a piston which pulled the cable, but steam pressure takes time to build up, so it limited how fast a carrier could put planes into the sky. In the electromagnetic catapult, the cable hooks onto the plane on one end, and onto a slider with the other end. The slider is pulled along rails by electromagnetic force, and as it rapidly slides down the rail it pulls the plane along with it before releasing it at the end of the deck. Combined with the plane’s engines and wind speed, the result is a team effort that puts planes in the sky instead of the sea. The electromagnetic catapult should work much faster than the steam one, because the catapult doesn’t need reconfiguring between airplanes, even if it goes from launching a large fighter to a small drone. The Navy first tested the electromagnetic catapult in 2010.

Now onboard the Ford, there’s no harm in making sure it still works. For these tests, the navy used a heavy, orange weighted sled, which they sent crashing into the waters of the James River. The sled lacks wings, so instead of a glorious flight, we get to see a giant, almost comical, splash instead. Fortunately, no sleds were harmed in the process, and the Navy recovered it for future tests.