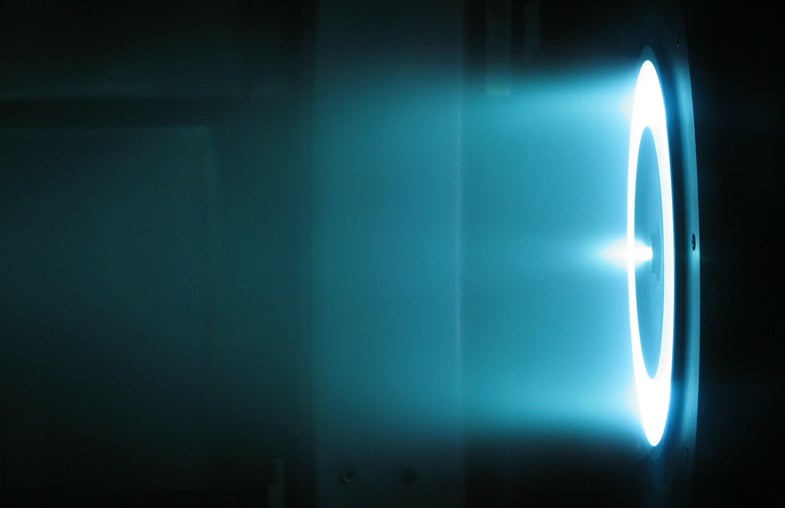 The Air Force’s secret robot space plane is going to try out a new engine. The X-37B has so far spent a total of 1367 days tooling around in Earth’s orbit, doing classified things. Yesterday, the Air Force Research Lab announced that on its fourth flight, the X-37B will come with a new fuel-efficient engine for maneuvering in space.

Hall thrusters were developed first by the Soviet Union during the 1960s, as a way for satellites to correct their course while in orbit. Apparently the engines were so effective the United States didn’t believe they were real at first. Now, Hall thrusters are commonly used on satellites and deep-space probes. They’re a kind of ion engine, which means the Air Force’s secret space robot will soon have an engine similar to that used by Darth Vader in his specialty Twin Ion Engine (TIE) Fighter.

Hall thrusters get their name from the Hall effect, where an electrical field is produced perpendicular to a magnetic field. Set up in an engine, this electric field accelerates ions from a noble gas like xenon, propelling it outwards fast enough that they can provide thrust for the vehicle.

In a press release, the Air Force Research Lab described the purpose of the upcoming test:

Putting an engine like this on a secret space plane means that the Air Force, which includes space in their mandate, will learn how to maneuver unmanned vehicles efficiently outside the Earth’s atmosphere. That’s essential for any future space fighters that may come to be, but I wouldn’t count on the Air Force developing actual TIE fighters just yet.