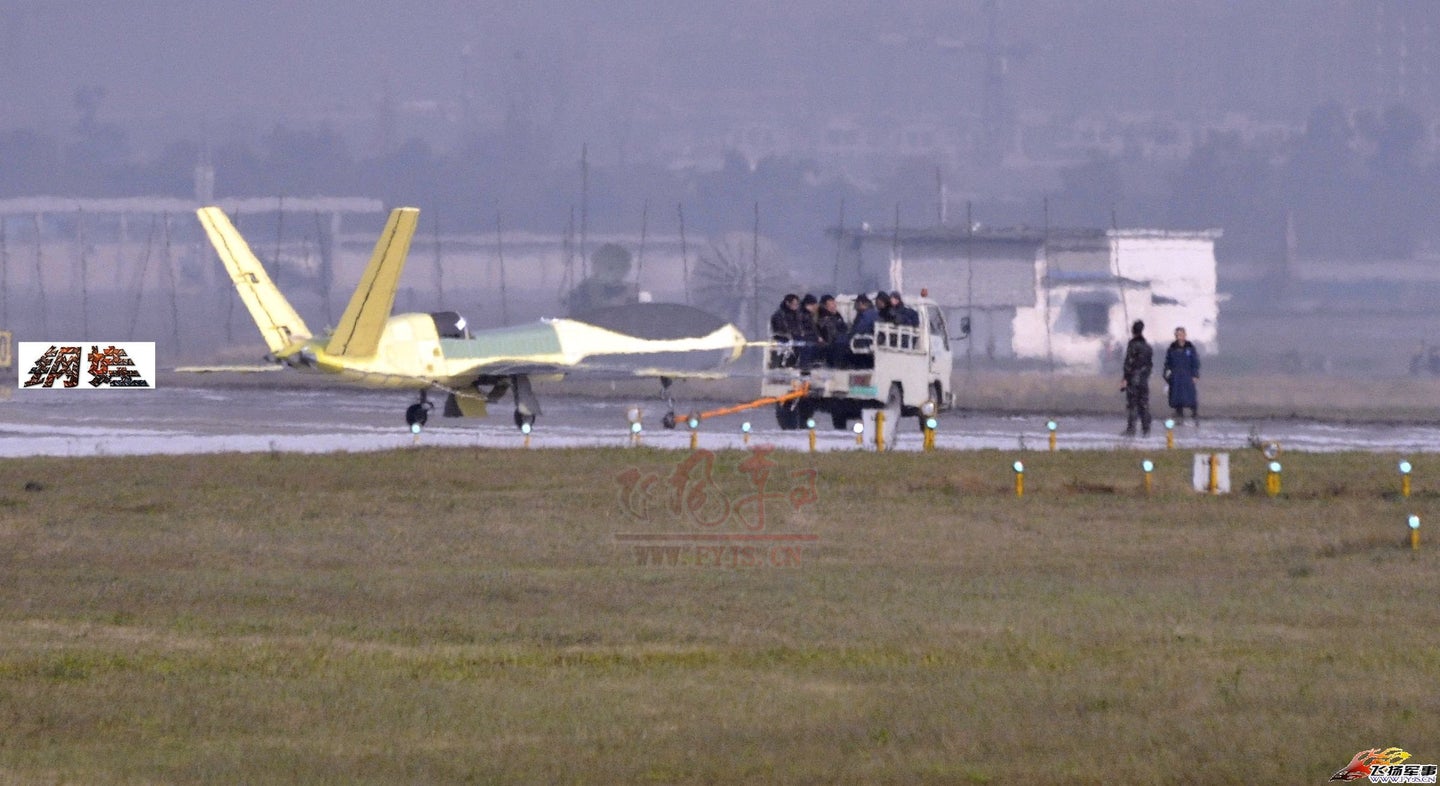 The redesigned Sky Wing UAV, seen here in Chengdu, China, has been redesigned with stealthier engines, a first for Chinese aviation. www.fyjs.cn
SHARE

The WZ-9 Sky Wing UAV,built by Guizhouz Aviation Industry Corporation, has been fitted with a pair of stealthy and more powerful engines. The Sky Wing was first seen in 2003, when it flew with a WS-11 turbofan, which has a thrust of 1.7 tons. It has some stealth festures, such as a V-shaped pelican tail and backwards swept wings. In its original configuration, it could carry about 80 kilograms of sensors such as electro-optical cameras and radars, on a 1.7 ton airframe. Compared to other Chinese high altitude reconnaissance drones like the BZK-005, the Sky Wing did not enter into widespread service. However, Chengdu Aircraft Corporation has undertaken further testing of the drone. 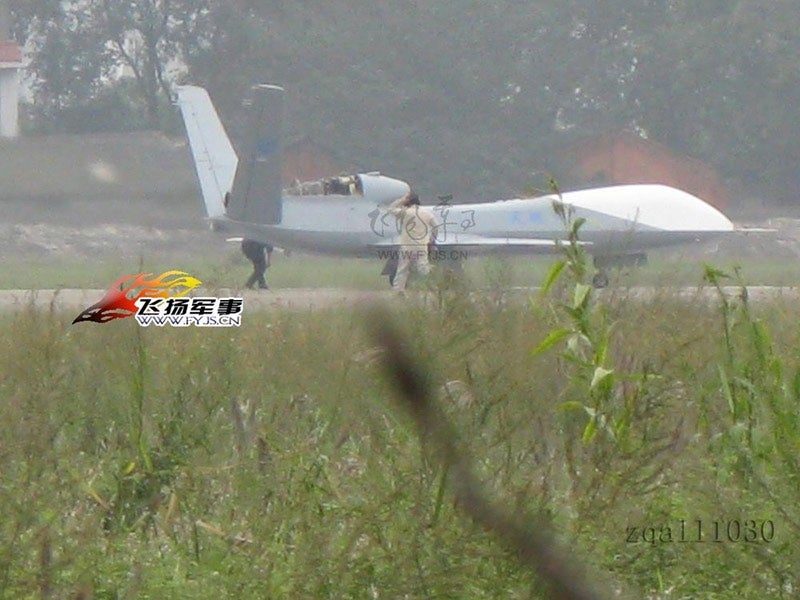 The first Sky Wing, which used a single WS-11 turbofan engine (a Chinese license copy of a Russian engine) made its first flight in the mid 2000s. Less stealthy than the current Sky Wing, the Guizhou built drone apparently did not enter into widespread service, as similar long endurance but propeller powered drones were probably cheaper during that time.

But this could all be changing. In December 2014, photos showed a redesigned Sky Wing being tested on a runway. While not as stealthy as the X-47B or Lijian stealth drones, the redesigned Sky Wing has a new engine intake, and more importantly, stealthy engine nozzles. These new nozzles are similar to the F-22’s in design purpose; their angular surfaces are less detectable than conventional circular nozzles, and can hold equipment to reduce the infrared signature of hot engine exhaust. The triangular engine nozzle is a first for Chinese aviation; not even the J-20 and J-31 stealth fighters have been fitted with stealth nozzles to date. 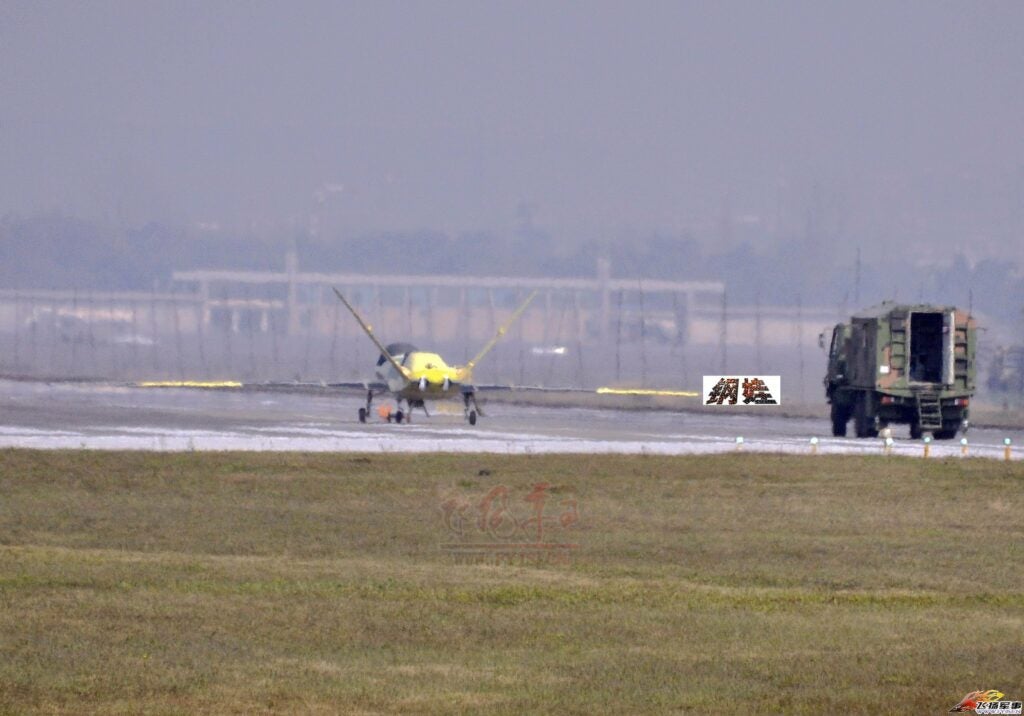 The new Sky Wing has two smaller turbofan engines, as opposed to a larger single engine. Having two smaller modern engines would provide better fuel economy, as well as making it easier to fit the engine nozzles with this triangular shroud, which will reduce both radar and infrared signatures.

The smaller new engines are likely to be very small, two spool turbofan engines, with are commonly used on small and medium business jets. By comparing the people standing around the Sky Wing, the engines’ diameters appear to be about between 14-20 inches, which suggests that each engine would probably have about 800-1000 kg of thrust. A combined engine output of 1.6 tons to 2.0 tons would give this stealthier Sky Wing comparable power to the 1.8 ton thrust of the General Atomic Avenger (a jet powered version of the deadly Reaper). With a stealthier airframe and more powerful engines, the new Sky Wing would be more survivable and carry more weapons than the Wing Loong, China’s current attack drone, as well as the earlier model US MQ-1 Predator and possibly even the MQ-9 Reaper.