What hurricane categories mean, and why we use them

Does the Saffir-Simpson scale hold up to the intense hurricanes we see today? 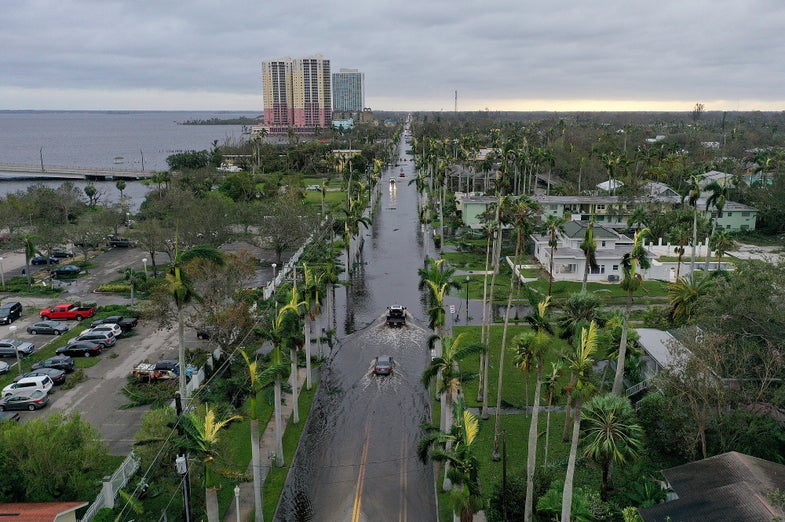 vehicles make their way through a flooded area after Hurricane Ian passed through the area on September 29, 2022 in Fort Myers, Florida. The hurricane brought high winds, storm surge and rain to the area causing severe damage. Joe Raedle/Getty Images
SHARE

This story was originally published on September 7, 2017.

Before Ian, or Maria, or Katrina, there was Camille. With winds so powerful that they knocked out wind gauges in Mississippi, the epic strength of Hurricane Camille was monstrous. But before it struck the Gulf coast on August 17, 1969, Robert Simpson, the director of the National Hurricane Center, made the executive decision to warn residents in the path of the giant storm of high winds, low barometric pressure, and a storm surge of between 15 and 20 feet.

Reports about the event many years later all agree that the decision to get so specific was unprecedented. In doing so, Simpson bucked tradition at the National Weather Service’s precursor, the United States Weather Bureau, which typically gave people living in the path of a hurricane generic warnings instead of granular details of storm surge or wind speed.

[Related: NOAA is changing the way it talks about hurricanes]

The decision to give people more information paid off. More people got out of the way of the storm, and Simpson was on the lookout for ways to communicate the dangers of storms more clearly. Around the same time, an engineer named Herbert Saffir was trying to figure out a way to quantify hurricane damage for the United Nations, and found that wind damage above 75 miles per hour wasn’t well categorized.

Saffir came up with a scale of structural damage due to destructive hurricane winds for his work at the UN, which Simpson found as he was pondering better communication options in the aftermath of Camille. Simpson was looking for a better way to communicate how dangerous hurricanes were to first responders, relief organizations, and the public.

Enter the Saffir-Simpson scale. Ranging from Category 1 (the weakest hurricanes) to Category 5 (the strongest hurricanes), the scale originally used storm surge and wind speed to categorize the potential destructiveness of a hurricane. Simpson and Saffir figured that a simple scale divided into five sections would be easy enough for the public to understand. For the most part, they were right. We’re comfortable knowing that a Category 3 hurricane is serious, and a Category 5 storm is really intense, even if we might not be comfortable writing out a definition for those categories.

But the scale was still just an estimate. As time went on, researchers began to notice that the storm surge in a Category 2 storm could be much larger than a storm surge in a Category 4 Storm, leading to deadly flooding. The scale didn’t take the area the storm covered into account, and was confusing the public. So, in 2010, researchers adjusted the scale to only include the sustained wind speed—not gusts, which are brief, faster bursts of wind—and renamed it the Saffir-Simpson Wind Scale. In 2012, another minor tweak to the scale adjusted the limits to account for confusion when translating between miles per hour and kilometers per hour.

At present the scale is as follows (paraphrased from the National Hurricane Center):

It’s unlike that Category 6 will be added to the current scale. But that doesn’t mean that other scales aren’t in development. Researchers are still trying to figure out the best ways to communicate the dangers of hurricane to the people in harm’s way. The current scale still doesn’t take into account the size or forward motion of a storm, and at present it doesn’t take storm surge into account either (though the National Hurricane Center does include storm surge warnings in its advisories).

James Done, a project scientist at The National Center for Atmospheric Research in Colorado, is figuring out another way of assessing the destructiveness of storms. The project he’s working on, the Cyclone Damage Potential Index, was developed in partnership with the reinsurance industry—the people who insure insurers. It considers the size of the storm and its forward speed to calculate out how destructive a storm could be.

“It measures the potential destructive power of the hurricane, but it doesn’t give you the actual damage,” Done says.

That’s because damage depends on houses, buildings, and infrastructure being in the path of a hurricane. If a storm with massive damage potential makes landfall on an uninhabited coast, there’s not going to be much destruction. Just like real estate agents always told you: location matters.

The index ranks storms from 1 to 10, and was able to predict that Harvey would be disastrous to Houston. It looks at the potential damage that a storm could do to buildings on land or offshore structures like oil rigs. But don’t go trying to translate the Saffir-Simpson Wind Scale to the new index just yet.

While the index has been making the rounds in research and industry circles for a few years, it’s still under development, and hasn’t been incorporated into official warnings. And that’s ok, says Done.

“The Saffir-Simpson is a superb communication tool. A lot of people make their evacuation decisions based on what Category the hurricane is going to be, and there’s a lot of inertia we need to take into account if we’re considering changing such a scale,” Done says. “I think it’s dangerous to suggest we should replace Saffir-Simpson with something else.”

Instead, he suggests adding additional measures of a hurricane’s destructiveness, like the cyclone’s potential damage, to the toolkit that already exists for the people on the front lines of storm prediction and response.

The Saffir-Simpson scale has been the primary tool in that box for years, and even though it’s evolved, it’s not going to disappear any time soon. But now we’ve got more tools at our disposal. As we face down some of the strongest storms we’ve ever seen, knowledge is always power.