This hurricane season has been brutal—but it’s not over yet. What’s coming next?

At least we've passed the peak. 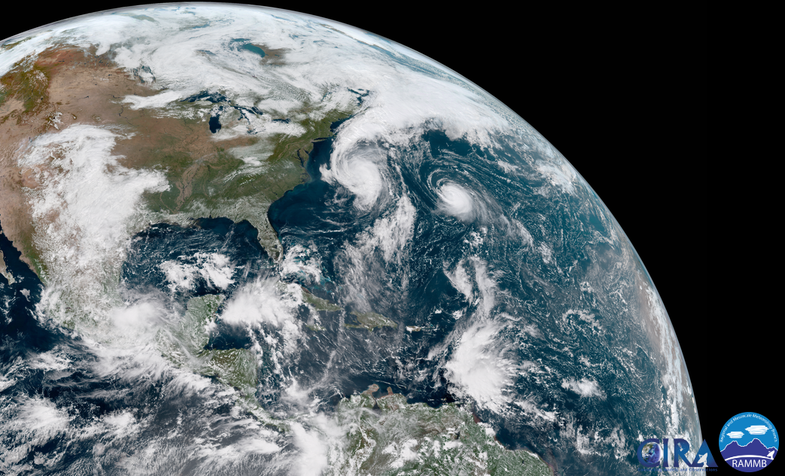 We’re finally past the peak of hurricane season in the Atlantic Ocean. This is welcome news for folks who live along the coast, but by no means are we out of the woods yet. Hurricane seasons—especially years this active—can crank out some ugly storms in October and even November. The arrival of fall is a sign that the season will soon start to calm down, but we shouldn’t lower our guards quite yet.

But the speed with which this season spat out extremely strong storms is far from typical. Eight consecutive named storms strengthened into hurricanes within a 45-day period between mid-August and late-September, and six of those eight storms made landfall as hurricanes. Even worse, three of those storms—Harvey, Irma, and Maria—hit land as a category four or five.

We still have two full months left to the hurricane season, and it looks like conditions will be favorable for storms to develop through at least the first half of October. The National Hurricane Center’s forecast on September 28, 2017, highlighted an area of interest in the Caribbean for potential tropical cyclone development over the next five days. Models are suggesting that more activity is possible in the western Caribbean within the next week or two.

The western Caribbean is about where you would expect storms to start forming around this time of the year. The origin points for tropical cyclones depend on the season. Storms commonly get their start out near Africa during the peak of the season, when the heat of the summer helps tropical waves form on the African continent and push out over the water. These are the seeds that sprout storms like Irma and Maria, ones we can sometimes watch for weeks before they ever threaten land.

Tropical cyclones that form earlier and later in the season tend to form closer to shore, as their formation is often influenced by active weather patterns associated with the changing seasons. These storms tend not to be as intense as those classic hurricanes that spend weeks pinwheeling across the Atlantic, but they can get pretty strong—and their proximity to land gives us a little less time to prepare before they become a threat.

A storm forming close to land doesn’t necessarily mean it doesn’t have time to strengthen. Hurricane Harvey blew up from a tropical depression to a category four hurricane in just a couple of days as it spun across the Gulf of Mexico. Hurricane Wilma grew into the most intense hurricane ever recorded in the Atlantic (by minimum air pressure) without moving more than a few hundred miles from where it started life as a tropical depression near Jamaica.

One particular note of concern for the rest of the season is that the waters of the western Caribbean are still extremely warm. Warm sea surface temperatures feed hurricanes the fuel they need to survive and thrive, but the surface will only feed these storms their energy for so long. The violent winds in a hurricane churn the ocean as these storms move along. This churning causes upwelling, drawing cold water to the surface from below. The cold water can help suppress later hurricane activity in a strong storm’s wake.

We haven’t seen any strong storms move over the western Caribbean this year, so the water there has been baking almost uninterrupted all season long. The oceanic heat content—a metric that takes into account the depth of warm water—is almost off the charts in this part of the ocean basin. This means that any storms that do manage to form in the Caribbean this year have a deep reservoir of steamy water to tap into as they strengthen. This raises the prospect that any storm that forms could encounter rapid intensification if atmospheric conditions are right. Rapid intensification is the same process that allowed all four powerful storms this year to reach their scale-topping intensities.

The good news is that the hurricane season will eventually start to shut down. As the cooler air of fall starts to take hold over land, hostile weather patterns will soon make the atmosphere over the ocean inhospitable for tropical cyclones. The water will grow too cold, the air will dry out, and winds will blow apart any thunderstorms that try to take root. Unfortunately, we’re a long way from that point. So keep your guard up—and keep an eye on the forecasts—for at least the next month or two.