Every sunset ends with a green flash. Why is it so hard to see? 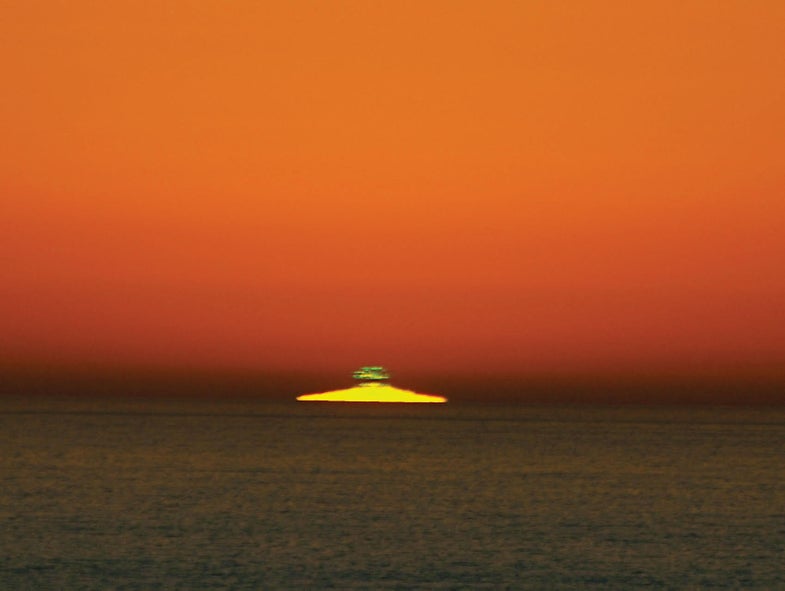 The finale of every sunset is green. Try to catch it, if you can. The story of the so-called green flash begins by answering this question: Why is the sky blue?

Sunlight contains every visible color, each with its own wavelength. Light travels as ripples, with crests and valleys; wavelength is the distance between the crests. The shorter the wavelength, the steeper the ripples. Of the three primary visual colors—blue, red, and green—blue has the shortest wavelength, and red the longest. As sunlight hits Earth, blue light’s steep waves cause particles in the air to scatter it almost totally, turning our skies cerulean. The leftovers combine to create the sun’s yellow glow.

At sunset, colors fade at varying rates. Just before the sun vanishes, the red light’s shallower ripple causes it to shoot overhead and miss your eyes. Green, with its steeper wavelength, remains the sole color survivor, if only for a second.

The green flash may happen every evening, but it’s hard to spot. Atmospheric conditions, like moisture and pollution, can warp and deflect the verdant tone before it reaches our eyes. A clear coastal night is typically your best chance.