The R1T and the R1S both competed in the Rebelle Rally, a 1,600-mile raid in Nevada and California. Let's take a closer look at their tech. 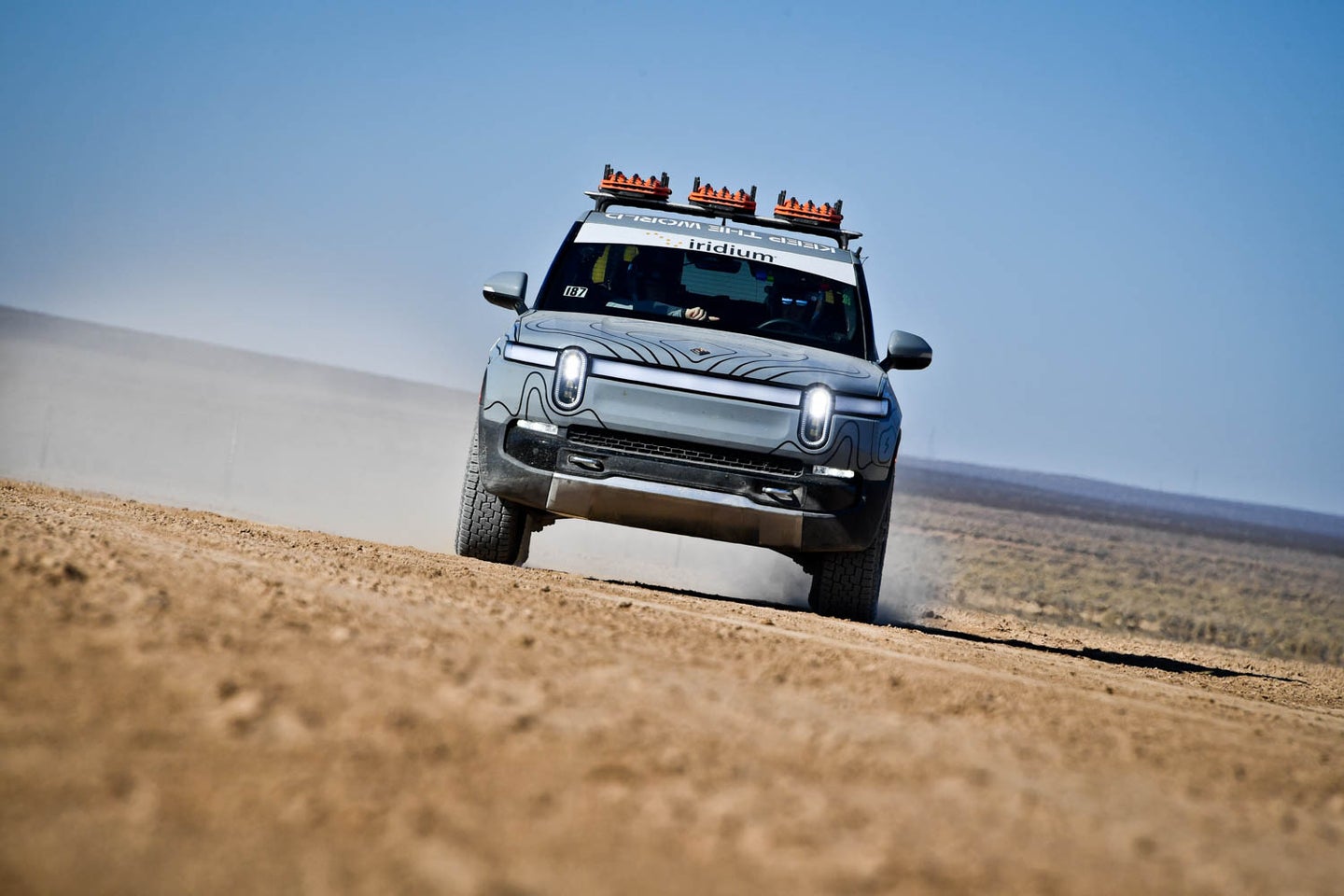 Long before Tesla entered the market, automakers have been tinkering with electrified vehicles and working toward creating an alternative to gasoline-powered cars. Targeted at urban commuters looking to save some coin at the gas pump, cars like Toyota’s Prius and Chevrolet’s Volt emerged as promising frontrunners, followed by today’s Hyundai Ionic 5 and Volkswagen ID.4, among others.

Today, the race is on for the next frontier: battery-powered off-roading trucks. GMC accelerated its production schedule for the Hummer EV, which features a crab-walking trick made for tight turns on tough terrain, and Ford’s new all-electric F-150 Lightning wasn’t far behind. Chevrolet is nipping at its heels with an electric-powered Silverado truck coming to market soon.

Meanwhile, small-batch upstart Rivian has been selling its R1T pickup since 2021 and R1S SUV since 2022—and coming up with new ways to make electric trucks as capable off the pavement as they are on it. Part of that formula can be attributed to the kinetic system, a proprietary electro-hydraulic roll control setup that replaces a mechanical anti-roll bar and smooths out the ride. On traditional vehicles, an anti-roll bar is a simple U-shaped piece of metal that acts as a torsion spring, connecting the axles to prevent excessive roll that is both uncomfortable and makes controlling the vehicle difficult.

The company sent teams in both of its vehicles to this year’s all-female Rebelle Rally, the longest rally raid (long distance off-road racing that takes place over several days) in the United States, at over 1,600 miles between Nevada and California. At the rally, Rivian put its trucks to the test on dirt, rock, and sand, finishing triumphantly. Rookie team Lillian Macaruso and Alex Anderson, both engineers for the automaker, placed fourth overall out of 53 teams in an R1T and Rosanna Nuch and Nicole Johnson also performed admirably in the top half of the field in an R1S. Macaruso explained more about Rivian technology to PopSci during a ride along after the competition to explain how it works.

Rivian’s hydraulic roll control provides stiffness when cornering in the same manner (and with similar equipment) as a McLaren 720S supercar. That’s no coincidence: Rivian recruited chief engineer Charles Sanderson from the auto manufacturer in 2018, and Sanderson integrated the Tenneco-supplied linked hydraulic damper system he knew quite well. That means the R1T has a sportscar feel, especially when accelerating, but the system leaves space for a looser fit in situations where articulation—vertical wheel travel, or how far the axle can move up and down— is present.

On a typical gas-powered off-road-capable vehicle, the sway bar (another name for an anti-roll bar) reduces the vehicle’s body roll and “sway” to stabilize the weight distribution. One thing you don’t want when you’re entering a turn on a racetrack, or cresting a dune, is for a weight shift to cause the car to tip; in heavy electric vehicles, even more so. Significant “head toss,” or the way the vehicle shakes your body around while traversing uneven terrain, is clearly undesirable, and Rivian strives to improve the drive to what Macaruso calls “living room comfort.”

“Essentially, you feel the vehicle tip or tilt when you turn a corner, and that’s what [the hydraulic system] is controlling with different pressures on each corner of the vehicle,” Macaruso says. “Imagine if you were to try to walk up a set of stairs with your arms and your legs on all fours and one leg starts to get more tired, the other three compensate for it.”

Rivian’s R1T has 800 horsepower and more than 900 pound-feet of torque on tap, and drivers can mash the accelerator and reach 60-mph in a scant three seconds. That’s fantastic when speed is the goal, but four-by-four driving requires more finesse to avoid breaking the truck. The R1T boasts balanced geometry for its approach, breakover (the angle between the vehicle’s tires and the middle its underbelly), and departure angles matched with a fairly generous ground clearance of 15 inches, giving the truck plenty of poise and steady movement over obstacles on the trail.

The company is watching how the truck handles tough test runs and is adjusting accordingly. After longtime Rebelle team Emme Hall and Rebecca Donaghe found the settings in their model R1T to be unconducive for sand dune driving during 2021’s rally, Rivian added a soft sand mode to both the R1T and R1S and pushed it out via an over-the-air software update earlier this year. On hard sand, changing to soft sand mode isn’t necessary, but floating on top of dunes or on a beach requires more rotation, and the mode allows for better control.

“When you activate soft sand mode, it changes how much wheel spin you can have,” Macaruso says. “And it’s essentially telling the truck, ‘Hey, you can dig more’ because every single wheel is independently controlled. And that means that each motor can control a wheel and move it differently.”

While Rivian’s recent recall due to an insufficiently torqued steering knuckle fastener spooked investors this week, the company is plowing forward with its impressive truck and SUV. If they can handle the Rebelle Rally, they’re positioned well to succeed.