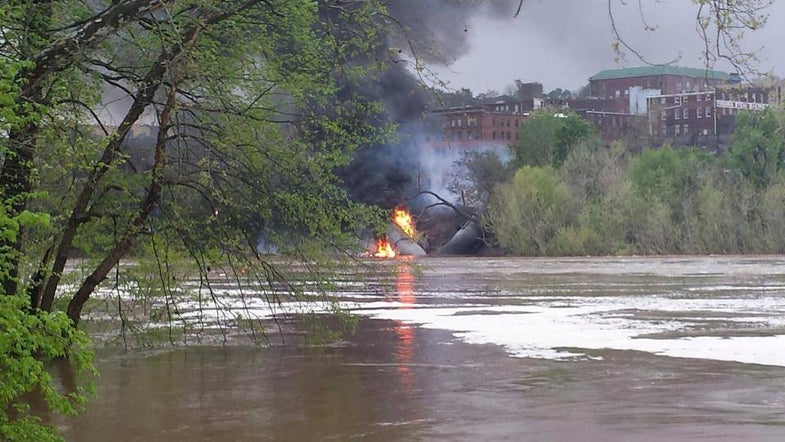 Image captured shortly after several rail tankers of crude oil derailed in Lynchburg, Virginia, on April 30, 2014. Flames are spreading onto the surface of the river, suggesting that oil is spilling into the river. Upper James RIVERKEEPER/James River Association
SHARE

Above: Drone-captured video of the April 30, 2014 train derailment in Lynchburg, Virginia. Via WSET.com – ABC13.

Yesterday’s multi-car train derailment in Lynchburg underscores what Dan Baum wrote last year in Popular Science: The railroad that keeps our 21st century economy on the move is still running on 19th century technology. “Trains carry 40 percent of America’s freight as well as 650 million passengers a year, and in general, their safety record is good and getting better. Most of the 2,000 accidents a year are minor, ” Baum wrote in January 2013. But…

There are no reports of injuries or deaths from this latest accident in Lynchburg, where according to the National Transportation Safety Board, 13 cars of a 105-car freight train derailed near the James River in mid-afternoon. One witness told local TV news that he heard a very loud boom, then saw thick smoke along with flames that seemed to shoot as high as where he was standing: on the 19th floor of a nearby office building. According to the train’s operator, CSX, the train originated in North Dakota’s Bakken shale region and was carrying crude oil to Yorktown, Virginia.

Three cars are laying in the river, and an estimated 50,000 gallons of crude oil are “missing.”

‘It could happen another day as well. We need to have adequate safeguards in place.’

“Some of that burned off, but we do know that crude oil got into the water: We’ve seen oil sheens [on the water] and on the river banks,” as well as fire on the river’s surface yesterday, says Bill Street, CEO of the James River Association. “We’re really alarmed and troubled,” he says, but not surprised, because 80 percent of the hazardous materials in Virginia are stored, transported, or used along the James River. “It could happen another day as well. We need to have adequate safeguards in place.” 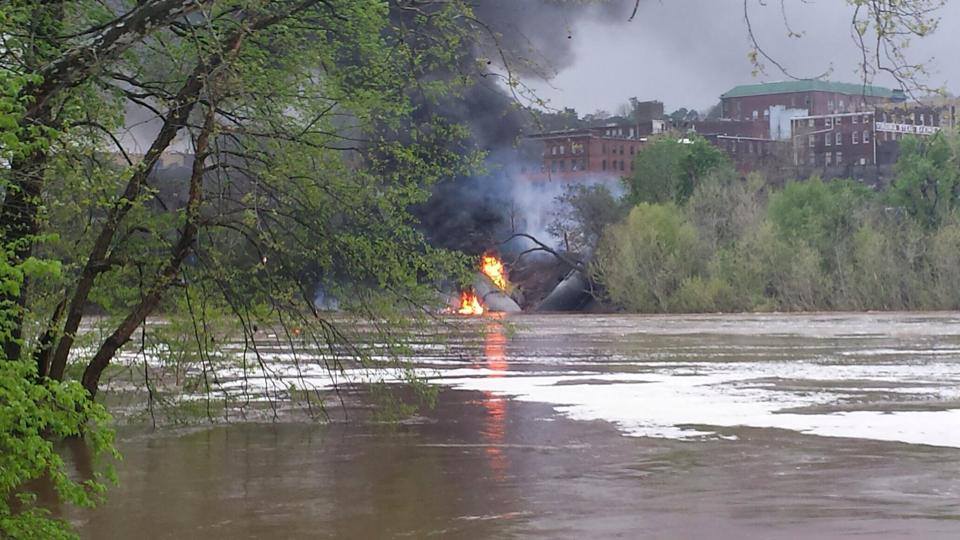 Image captured shortly after several rail tankers of crude oil derailed in Lynchburg, Virginia, on April 30, 2014. Flames are spreading onto the surface of the river, suggesting that oil is spilling into the river.

It’s not clear yet how this spill will affect the ecology of the James River or the Chesapeake Bay, says Street. “We’re in the middle of a flood right now, which will dilute the impacts on the one hand,” he says, “but also make the effects harder to assess, as well as making containment and cleanup more difficult.”

The timing of the accident could not be much worse for some animals. “We’re right during the spawning season for migratory fish, particularly herring and shad, which have low population levels already,” says Street. “Their eggs and the small fish when they hatch—those are the most vulnerable life stages. So we’re worried about what the crude oil might do to that.”

The derailed cars in Lynchburg appear to be DOT-111 tankers.

DOT-111 tankers have been moving hazardous liquids on the rails for decades, so unsurprisingly they’re found at many rail accidents–which, as Baum wrote, are more often than not caused by human errors, not equipment malfunctions. But the National Transportation Safety Board has known since 1991 of serious safety flaws that can turn DOT-111 tankers into bombs when accidents do happen, as the Associated Press reported last year: “Its steel shell is too thin to resist puncture in accidents. The ends are especially vulnerable to tears from couplers that can fly up after ripping off between cars. And unloading valves and other exposed fittings on the tops of tankers can also break during rollovers.”

Exploding DOT-111 tankers carrying crude oil were involved in the 2013 disaster in Lac-Mégantic, Canada, where more than 30 buildings in the center of town were destroyed and over 40 people killed. The DOT-111’s flaws in are so notorious, in fact, that an entire web site, The DOT-111 Reader, is devoted to reporting on its mishaps and demanding action.