Lockheed’s Fusion Promise: What We Know So Far

Can the company do what's never been done before? 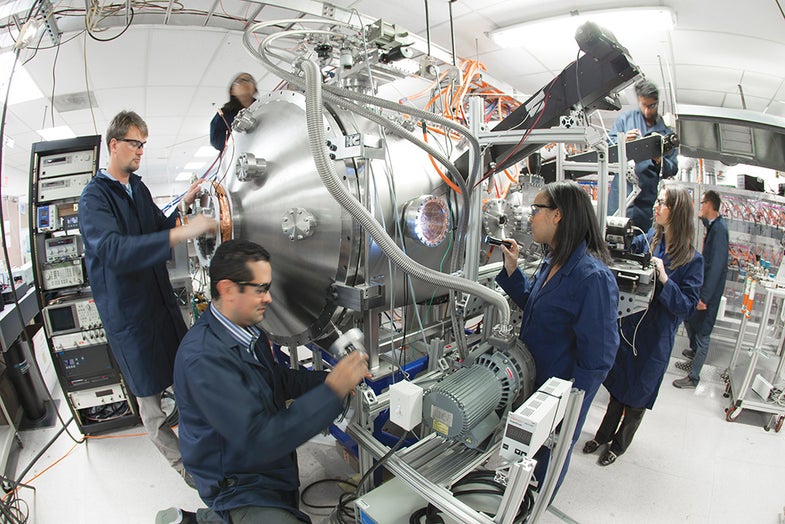 Researchers at Lockheed Martin made headlines this week with the announcement that they are on the fast track to building a nuclear fusion reactor. But experts responded with skepticism.

Fusion promises unlimited clean, renewable energy without the nasty byproducts of the uranium-splitting fission that drives today’s nuclear plants. The problem is figuring out how to contain it. For hydrogen atoms to smash together with enough force to fuse, they must jitter and bounce with many times the heat of the sun’s core. Tom McGuire, the Lockheed project lead, tells Popular Science their reactor will run at 200 million degrees. Matter that hot leaves the simple world of solids, liquids, and gasses to form a plasma. No solid vessel will contain that material, so fusion generators resort to suspending the roiling mass with powerful electromagnets. The best-funded fusion project in the world, called the International Thermonuclear Experimental Reactor (ITER), takes the brute force approach. It’s fusion chamber, or “tokamak,” stands 100 feet tall and, at 23,000 tons, has about the same mass as a tank battalion. If it’s ever finished, it’s expected to cost tens of billions of dollars.

McGuire’s claim that his team of less than 10 people will solve the containment problem in a machine about the size of a school bus flies in the face of a long history of failures in fusion engineering. Peter Gleick pointed out that their claim of a “fusion breakthrough” isn’t exactly a first:

McGuire says that history works to Lockheed’s advantage. His team’s model does have the benefit of six decades of research by other groups from which to work. The key difference in their model is a containment system that adapts on its own to fluxes in the plasma. When the roiling cloud surges against any one point in the field, the magnets push back harder like a compressed spring. That new system is also what lets their model, which they’re calling a Compact Fusion Reactor (CFR), fit into such a small space. (Daniel Clery, author of fusion book A Piece Of The Sun, notes in Science that versions of this idea have been proposed before.)

Notably, the announcement has not come with published results that other researchers could study. This may not be surprising though. Asked what the ultimate goal of the project is, McGuire says he wants to “end energy scarcity as a source of conflict.” But its a good bet that making huge profits selling power to the entire world is also high on Lockheed’s list, so sharing details of the design may not be in their best interest.

McGuire would not comment on the cost of the Lockheed project, but noted the small size of his team.

Some fusion experts who have looked at publically available patents and images of the Lockheed design have expressed doubt that their reactor would do anything but tear itself apart. Clery writes:

After containment, fusion’s major problem is maintaining a plasma density high enough that the reaction keeps going on under its own steam (as long as hydrogen isotopes derived from lithium and seawater keep pouring into the system.)

McGuire, nonetheless, is confident his group will eventually succeed—though he shies away from providing a specific timeline. “Putting a number on it right now is spurious—or, hard,” he said. Their reactor, currently at in its two-meter-long fourth generation, should be ready with another several development cycles. The team will use that time to “ramp up” the design to its full potential. If it works, he says its small size will enable it to be fitted for use in everything from power plants to interplanetary spacecraft.