Why The Obama Administration Rejected The Keystone XL Pipeline

Nothing's coming down that pipe 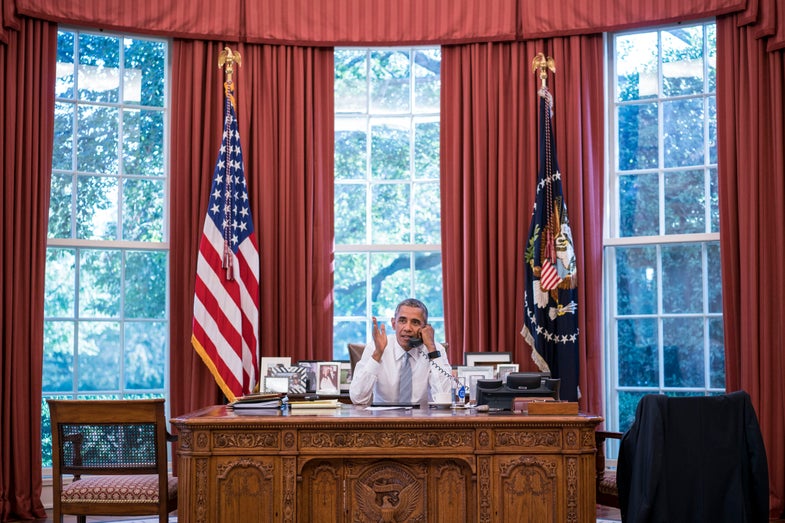 President Barack Obama talks on the phone with Cuba President Ral Castro in the Oval Office, Sept. 18, 2015. (Official White House Photo by Pete Souza) This official White House photograph is being made available only for publication by news organizations and/or for personal use printing by the subject(s) of the photograph. The photograph may not be manipulated in any way and may not be used in commercial or political materials, advertisements, emails, products, promotions that in any way suggests approval or endorsement of the President, the First Family, or the White House. Pete Souza
SHARE

In his remarks, Obama noted that the pipeline had taken on an outsized role in politics, with some groups proclaiming that it would be an economic “silver bullet” and others prophesying environmental cataclysms should the process go through. As Popular Science showed in our February 2015 issue, neither position is entirely true.

Obama noted that in the first place, “The pipeline would not make a meaningful long term contribution to our economy.”

There would be an initial increase in construction jobs, but over the longterm, the pipeline wouldn’t add jobs to the United States economy. Helping his case was the fact that the United States economy added 271,000 jobs last month. Obama suggested that if legislators really wanted to increase job opportunities, they would invest in programs dedicated to improving American infrastructure.

The second reason was that contrary to assertions by proponents of the pipeline, building the Keystone XL would not lower gas prices in the U.S. Gas prices have fallen dramatically in recent years as the United States has increased domestic production.

Last, but not least, “Shipping dirtier crude oil into our country would not increase our energy security,” Obama said, noting progress that has been made to increase reliance on renewable energy sources like wind and solar. Watch the full remarks here:

Earlier this week, TransCanada, the company behind the controversial Keystone XL pipeline requested that the federal government halt the permitting process. The company was presumably hoping that a delay in the permits would be long enough to see President Obama out of office, and that a more oil-friendly Republican nominee (the Democratic candidates oppose the pipeline) would push the permitting process through.

Obama has made climate change a central tenant of his last term of office, and already vetoed legislation earlier this year that would have permitted construction to begin.

They Keystone XL pipeline is a 1,179 mile long, pipeline that would run from Canada to the Gulf of Mexico, transporting oil through the 36-inch wide pipe. The pipeline was first proposed in 2008 and got approval from the Canadian government in 2010 but could not begin construction until it received approval from the United States. Now, that way has been blocked.

Obama’s rejection bolsters his climate change credentials ahead of the upcoming United Nations summit on climate change happening in Paris next month. Obama and other world leaders hope to come to a consensus on how to slow human’s impact on the world’s climate. “Frankly, approving this project would have undercut our leadership” Obama said in his statement today. “America is going to hold ourselves to the same high standards that we hold the rest of the world.”