The Keystone pipeline just spilled another 210,000 gallons of oil

Here's what you need to know about the situation in South Dakota. 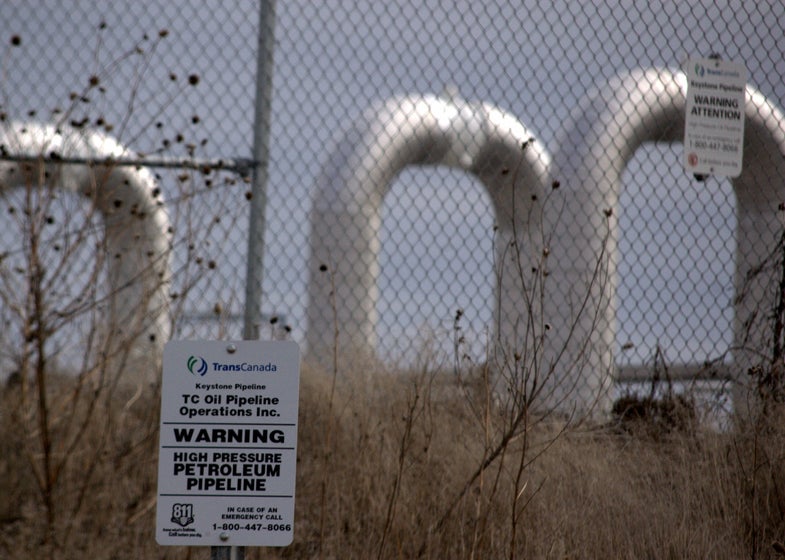 A pumping station on the Keystone pipeline in Nebraska. shannonpatrick71
SHARE

Sometime before 6 a.m. local time, operators noticed that pressure had dropped in a pipeline capable of pumping 590,000 barrels of crude oil products every day from Canada down to the Gulf Coast.

The oil was likely diluted bitumen, or dilbit, a mixture of tarry oil and thinning agents that let the commodity flow through the pipe. But the drop in pressure indicated that instead of heading through on its appointed course, the oil was out of the pipe and spreading through the ground near Amherst, South Dakota, creating a large stain on the browning fall landscape.

In a statement, pipeline operator TransCanada says that “the section of pipe along a right-of-way approximately 35 miles (56 kilometres) south of the Ludden pump station in Marshall County, South Dakota was completely isolated within 15 minutes and emergency response procedures were activated.”

Early estimates put the total spilled at 5,000 barrels, or 210,000 gallons of dilbit seeping through the landscape.

NPR reports that the South Dakota Department of Environment and Natural Resources was not informed of the leak until about 10:30 am local time, several hours after the incident.

The pipeline is now shut down between Alberta, Canada and locations in Oklahoma and Illinois. The affected land is reportedly used for grazing livestock.

How will people try to clean it up?

CNN reports that there is no immediate indication that any waterways, water supplies, or wildlife have been affected. “It is a below-ground pipeline, but some oil has surfaced above ground to the grass,” South Dakota Department of Environment and Natural Resources spokesman Brian Walsh told CNN “It will be a few days until they can excavate and get in borings to see if there is groundwater contamination.” Borings are deep holes that allow geologists to look at what’s going on underground.

Cleaning up an oil spill on land can involve manually or mechanically excavating the area, depending on the type of soil and location of the spill. Sometimes oil might be flushed out, other times it might be wiped or sponged up, vacuumed, and otherwise removed. The approach will depend on the type of soil, the sensitivity of the area, and how closely humans or wildlife might interact with the spill.

Has this happened before?

In its first year of operation, the Keystone pipeline leaked 12 times, with leaks that ranged from 2 gallons to 21,000 gallons. Last April, a leak on the pipeline released 16,800 gallons of dilbit.

Then in 2013, a spill of 134,000 gallons of dilbit in Mayflower, Arkansas caused an estimated $57.5 million in property damage when it spilled in a suburban area.

A more severe incident occurred in 2010 in Michigan when a pipeline leaked a million gallons of oil into the Kalamazoo river, the largest inland oil spill in the United States.

Dilbit is particularly problematic in water. In the ground, bitumen is thick and heavy, more like a solid than an oily liquid. It’s extracted from sandy deposits in Canada by either mining or heating the oil underground until it can be pumped to the surface. It flows through pipes with the help of chemicals that thin it out. But when exposed to the environment, those components can separate, allowing volatile chemicals to evaporate, leaving a sticky, heavy sludge that sinks in water instead of floating in a slick like other forms of oil. As it weathers, the oil gets stickier, adhering to its surroundings, and becomes more difficult to clean up over time.

A decision on whether or not the Keystone XL pipeline will be allowed to proceed through Nebraska is expected next week.