The weirdest things we learned this week: Lady Liberty’s big secret, the ultimate exercise hack, and a penis in a bottle 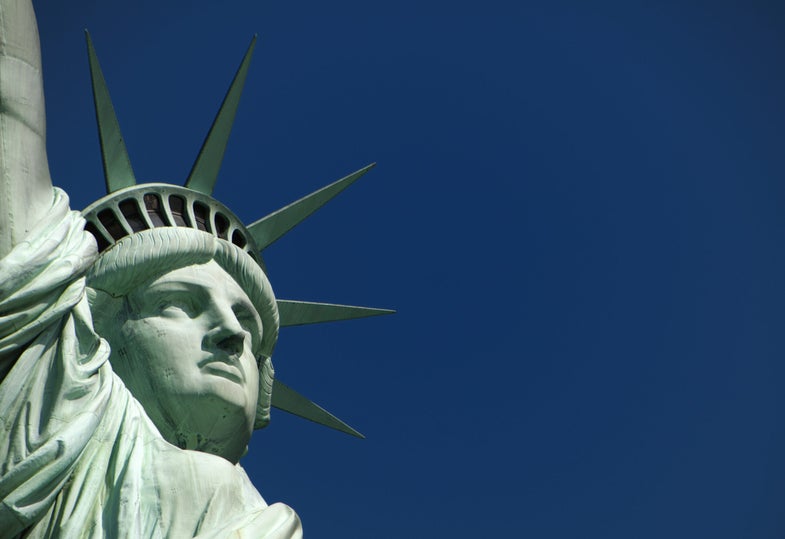 And if you’re in the NYC area, you can come join us for an extra-weird live show on September 14.

Fact: If you pee into the wrong kind of bottle, it can suck your penis inside

There are currently 174 books on and around my desk. I counted. This is wild, but it is not the weirdest thing I learned this week. That honor goes to a delightfully horrifying anecdote found in one of those 174 books. In The Mystery of the Exploding Teeth: And Other Curiosities from the History of Medicine Thomas Morris recounts some of the strangest medical cases in history. (The book is available on November 13. Do yourself a favor and preorder it so that you can gross everyone out at Thanksgiving.)

One of those cases is the unfortunate 1849 incident a local doctor detailed in the New England Journal of Medicine (paywall) “Novel Effects of Potassium—Foreign Bodies in the Urethra—Catalepsy.” He was called “in great haste” to a young man with a pint bottle stuck on his penis. But wait! It’s not what you think.

Once the good doctor neatly smashed the glass off this poor dude’s member, he found out the reason for the unfortunate predicament. Turns out the guy needed to pee in the middle of the night, and grabbed the closest glass container he could find. Sadly for him, it contained small amounts of potassium, which does not react well with water (or urine). See a video of the reaction between potassium and water below, and listen to the podcast to find out how this story turned out. (Also, I would love to know what experiments this guy was doing with potassium in his bedroom in 1849—if anyone knows, let us know!)

Fact: Swishing a sports drink and then spitting it out increases your exercise performance

For the past two months, I’ve been training for the Chicago marathon, which I will run on October 7. This is my first marathon and the longest race I’ve ever trained for. The hardest part of my training thus far is not the weekly mileage, but rather the art of hydration and carbohydrate replenishing. Gels, Gatorade, and essentially anything but plain old H2O seems to upset my digestive tract—and the same is true, to some degree, for more than half of all distance runners.

In my never-ending quest for the best way to hydrate, I came across this study: Researchers had 7 male and 2 female cyclists perform an intense, hour-long exercise session on two different days. On day one, all they did was perform the workout. But for the second session, during the same workout, the researchers gave half a drink containing the processed carbohydrate maltodextrin. The other half had plain water. The subjects spit out the beverages after swishing them around in their mouths for five seconds. In the end, the ones who swished and spat the maltodextrin solution had a significant performance improvement compared to the water swishers, who had none. In fact, the carb swishers improved an average of 2.9 percent, which is far from insignificant when every second or minute counts.

But why? All they did was swish a carbohydrate solution and spit it out. And there’s no way our bodies can absorb any of the sugar that way—that’s been studied.

So what caused the improvement? It turns out this is a perfect example of the strong influence our brains have on our exercise limits. Our mouths have receptors that recognize carbohydrates. Swishing the carbohydrate solution triggers those receptors, which then send a signal to the brain telling it that calories are coming. The brain, relieved, signals the muscles that they can keep moving.

Since that time, researchers have repeated the study dozens and dozens of times, tweaking the amount of carbohydrate in the rinse, the amount of time it stays in the mouth, and the amount and kind of exercise the athletes are doing, and they all come to the same conclusion: The swish works. If you are planning on using the swish method, listen to the podcast for some research-based best practices—and my master marathon hydration plan.

Fact: Everything I ever knew about the Statue of Liberty was a lie (and we turned her into a battery)

Researching my fact led me on a wild ride through the history of one of our nation’s most iconic statues, and you’ll have to listen to the podcast to learn what non-sciencey secrets I uncovered. But the fact that started my journey is all about chemistry: in the 1980s, when the National Parks Service decided to stop slapping paint on the Statue of Liberty and actually give her a real tune-up, they discovered she was breaking down inside. But the cause of the erosion is the really fascinating part: the famous copper shell of the statue is super thin, but an iron frame inside holds her up. Unfortunately, iron and copper have what’s called a galvanic reaction when exposed to moisture. The water (which had salt in it) was acting as an electrolyte, allowing electrons to break free and giving the resulting iron ions the ability to move on through to the copper. The resulting series of electron swaps carries a voltage—about a quarter of a volt, in this case.

According to a New York Times article from 1985, engineers fixed the problem by swapping the eroded frames for new steel pieces, and they used Teflon coating to ensure the disparate metals wouldn’t touch again. The American Society of Civil Engineers even donated a set of CAD schematics to the National Park Service, which replaced original drawings lost in Paris back in the early 1900s. It seems wild to think we went through so many years not really bothering to care what was going on under the Statue of Liberty’s thin copper surface, but at least she joined the 20th century instead of collapsing.