Why do marathon runners get the runs?

It doesn't just work your leg muscles—racing is rough on your intestines, too. 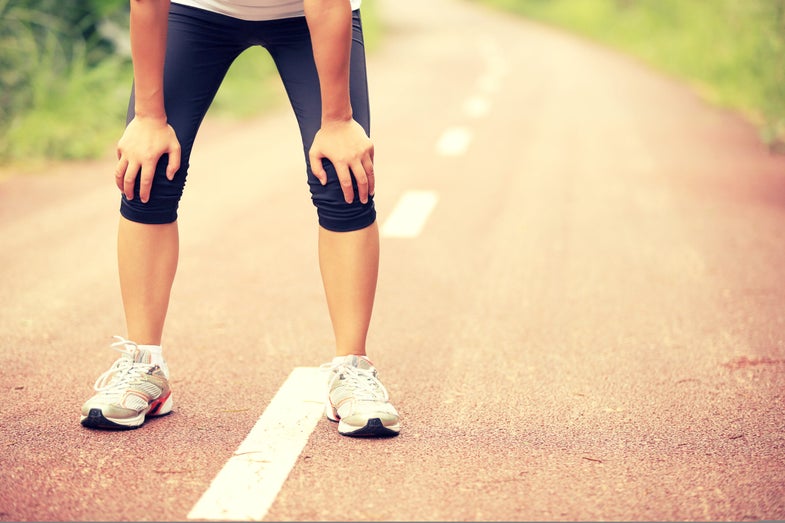 This article was originally published on November 2, 2017.

In 2014, a woman visited a California doctor’s office complaining of a year and a half of watery diarrhea. She seemed healthy—she hadn’t lost weight and was in excellent shape. In fact, she had started running marathons two years prior, and typically ran about 20 miles every weekend. She also mentioned that she had noticed a correlation between her long runs and the uncomfortable bowel movements, which seemed to become less formed and more frequent as her intense training months dragged on. Her doctors advised the woman to stop running such long distances, and her gastrointestinal issues stopped within a month.

Kim van Wijck, a Netherlands-based physician and triathlete herself, remembers a similar experience with one a patient who was a professional middle-distance runner. The athlete tried everything—giving up caffeine and dairy as well as performing pre-race relaxation techniques—to make her gut less sensitive. But nothing eased the discomfort.

These women are not alone in either their grueling athletic pursuits, or their resulting intestinal distress. On November 5, more than 50,000 runners will gather for the TCS New York City Marathon, and the portapotties will absolutely be vital to a successful—and bearable—race.

Running causes a span of digestive issues that range from heartburn and acid reflux to frequent bowel movements. The most common, however, are those in the lower digestive system, which includes the small and large intestines. These issues can be as mild as bloating and flatulence to as severe as bloody stools. Doctors and researchers don’t know exactly how many runners experience these belly aches, but they estimate it’s around a third to a half at any given time. One study out of the British Medical Journal found that almost half the participants in the 1985 Drammen marathon in Norway reported some degree of runner’s diarrhea during and immediately following the race. Many physicians estimate that most people suffer some form of intestinal trouble eventually.

The good news is that these gut issues, while uncomfortable, are (usually) transient. Understanding why they occur might help some runners deal with the problems, or at least give them comfort in knowing why it’s happening and that they aren’t alone.

One reason for the distress could be that our delicate digestive organs aren’t getting enough blood during exercise; a condition known as ischemia. At any given moment, the heart pumps oxygen and nutrients to whatever organs need it most, which changes depending on the activity at hand. During an intense run, the skin and large muscles are the most urgent recipients, whereas the intestines don’t get as much attention.

That makes sense. While running, our glutes have more of a need for oxygenated blood than our stomachs. In fact, during peak physical exercise, blood flow to the internal organs can decrease by up to 80 percent. While that resource reallocation may be necessary during a track race or to flee from danger during a zombie apocalypse, the lack of blood compromises the mucus that lines the intestines, making it more permeable and prone to disturbance. In one review, Brazilian scientists found that lack of blood flow to the digestive system was the most significant factor in runner’s nausea, vomiting, abdominal pain, and bloody diarrhea.

The tummy troubles don’t end at the finish line, either. The morning- and day-after effects that runners often experience probably have to do with some slight intestinal tissue damage from the lack of blood flow, says van Wijck, though she makes it clear this injury is minor. “It’s kind of like a scraping of the skin,” she says. “Afterward there are new cells and no lasting problem.”

Why is it so common for runners to have runny poop?

There must be more to runner’s diarrhea than ischemia, or else the athletes would experience it at the same rates as those in other sports. The Brazilian researchers showed that the fleet-footed racers dealt with these problems almost twice as often as athletes from other endurance sports, like cycling or swimming. (Other athletes can get digestive issues, but they are usually much different than runner’s trots and are not as common. Swimmers, for example, sometimes deal with excessive burps.) Professional runners were also three times more likely to undergo a bout of diarrhea than recreational runners. Researchers think that the mechanics of sloshing your organs around for hours at a time is likely what amplifies the effect of exercise alone. Some studies have found that the constant gastric jostling for more than 52,000 steps can lead to an urgent needs to use the facilities, as well as flatulence and diarrhea.

Sadly, there aren’t many strategies a runner can use to direct blood flow towards their intestines, or to keep them steady during the race (marathon corsets are not advised). However, athletes can control their diets and how much water they drink—and this could make a difference in how a person’s digestive system performs during long runs. One study found that Ironman participants that ate foods that were high in fiber, fat, protein, and dense carbohydrates during and shortly before the race were more likely to experience problems. Those foods are all more difficult to digest than simple carbohydrates like straight table sugar. The intestines have to work harder to break them down, which is not ideal for an already weakened digestive system. Indeed, all the men who ate thirty minutes before the race threw up during the mile-long swim. (The study did not include women, which is frustrating to the writer, who is an Ironman 70.3 finisher.)

It’s probably best to stay away from hard-to-digest foods prior to racing, but researchers still aren’t completely sure what’s better. The carbohydrate-rich energy gels that are frequently distributed throughout races and that runners consumer before and intermittently during the race might not be any better.

While these are essentially simple carbohydrates in the form of sugar and are supposedly an easy-to-digest, quick energy source, studies looking into the effects they have on runners’ guts are mixed. One small study found that runners who frequently consumed these packets while racing did not experience significant gastrointestinal problems during a ten mile run. But another larger study found the opposite: For both men and women running triathlons and both half and full marathons, there was a correlation between these high-carb gels and reports of nausea and flatulence. Though, when researchers compared the finish times of competitors who consumed the gels to those who didn’t, they found that the ones who used the gels did, on average, achieve faster times. Some scientists recommend drinking beverages with more than two types of carbohydrates—like glucose and fructose—as opposed to a juice with a large amount of one kind of carbohydrate, which seems to make gastrointestinal symptoms worse.

Usually, runner’s problems have to do with the jostling effects of the sport and the decreased blood flow. However, a common habit of long-distance runners can also be exacerbating or triggering the symptoms: The frequent use of non-steroidal anti-inflammatory drugs (NSAIDS), such as ibuprofen. While useful for muscle pain, these can cause problems anywhere along the GI tract, from the esophagus to the colon. In a healthy gut, epithelial cells in the gastrointestinal tract, similar to those in our skin, hold tightly together to protect large molecules from passing through the intestines and into the bloodstream. A small study at the 1996 Chicago marathon hinted that ibuprofen made the mucus lining of the intestines more permeable, which could lead to gut trouble over time, and later studies back up these findings.

These drugs partly work through reducing blood flow to the digestive system, which is a problem that’s exacerbated through exercise, according to van Wijck, who led a study that found that damage markers in the digestive system were twice as high in runners who took these anti-inflammatory meds. And this isn’t just for runners. Its well known that NSAIDs, when taken in high quantities for an extended period of time, can cause gastrointestinal effects, like an inflamed gut, known as gastritis, and even small sores in the stomach lining, called ulcers. Heat and alcohol can also cause gaps between these epithelial cells as well.

While there is no foolproof method to prevent the runner’s runs, staying hydrated and eating foods that won’t aggravate the condition is probably best. And, just as runners practice the race course and the distance, they should also rehearse when to eat and remember when they will need to use the bathroom so that there are minimal to no surprises on race day. “You have to really listen to your body, which people already do when they have muscle pain,” says van Wijck. Paying attention to your gastrointestinal system with the same attentiveness, she says, could help to minimize the amount of discomfort you feel.