The weirdest things we learned this week: Cruise ships full of poop, deadly wallpaper, and the sport where women beat men 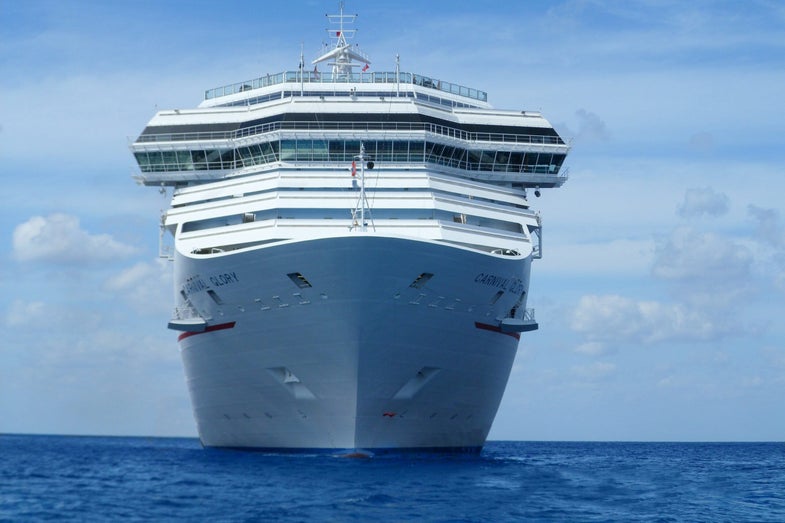 Fact: Cruise ships are totally full of crap, and that’s a feat of engineering

Even if you don’t understand the appeal of being on a boat that weighs hundreds of thousands of tons with a few thousand people for several days, you have to be kind of amazed—or disgusted, maybe—by the logistics of a cruise.

The world’s largest cruise ship holds 9,000 passengers and crew, which is a lot more than the population of the capital of Vermont. These are cities set to sea. They have garbage collectors and recycling plants and a fire service and a hospital.

They also have sewage farm on board.

If you only know one thing about cruise ships, it’s probably that there are literal tons of food available, 24 hours a day. With all that eating comes a lot of pooping. But where does it go?

Upon flushing, vacuum suction lines (like those on airplanes) suck up the contents and whip it into one of the marine sanitation devices in the engine room. Then there are machines that siphon out the water, and treat it until “you can drink it if you want” (the words of Matt Grimes, Viking’s head of nautical and technical operations). That water is then sent out to sea.

So then you have this sort of dense, sludgy material left. All of that is stored in a tank with aerobic bacteria, which chow down on the poop until the ship hits the port, and it’s offloaded. This most certainly varies, but Grimes says they offload that material only about once a month. So when you’re cruising through the tropics, you can rest assured that a whole lot of poop is cruising along with you.

Fact: Women might be better than men at ultramarathons

In the world of competitive athletics, men tend to have the edge over women. On average they sprint, swim, throw, and lift slightly better than women do. In major marathons, for example, the top men finishers are usually about 15 minutes faster than their top female counterparts.

Despite these facts, back in the 1990s, two researchers—Brian Whipp and Susana Ward—proposed a theory that at some point in the near or far future, women would overtake men, at least in distance-running sports like the marathon. Their reasoning? Women have only been competing officially in a large capacity since the early 1970s, when Title IX essentially made it illegal to exclude women from high school and college sports.

Unfortunately, the 1992 theory has yet to come true, and most physiology and human performance experts now think it probably won’t for most endurance races—with the exception of one that they aren’t sure about: Ultramarathon running.

Ultramarathon running, which has been increasing in popularity in recent years, is any distance longer than the marathon (26.2 miles). Today, a bunch of 50K ultramarathons (about 31 miles) exist, as well as a handful of 100 mile races—and women have been steadily improving their finishing times. Women are now beating men at rates that are far different than those seen in other endurance runs like the marathon.

Recently, researchers have been theorizing why women are beating men and whether they’ll keep getting even better. They think it’s a combination of women’s overall form, which tends to be better on average, fatiguability, and a few other physiological factors. But for now, we don’t know all that much—because most scientific research has historically focused on male subjects, and studies on athletic pursuits are no exception.

Fact: There was a time when people all over the world used a known toxin as a dye—and put it on everything

A story about three recently-discovered poisonous books took me down the arsenic rabbit hole (we’ve all been there). In 1775, Swedish chemist Carl Wilhelm Scheele described a new recipe for a vibrant, beautiful green dye. This was thrilling stuff, because green had historically been a tough color to crack—there’s no one thing in nature you can soak fabric in to create a really rich verdant hue. Scheele’s Green was a hit. Unfortunately, everyone using it was getting a hit of a potent toxin—the color got its vibrancy from copper arsenite, a form of arsenic.

The really intriguing thing about this story is that no one was unaware of arsenic’s toxic properties; people were using it to kill rats at the same time they were using it to dye everything from wallpaper to clothing. But a few things went wrong: first, Scheele assumed everyone would know and understand his dye had arsenic in it—a big ask, considering how little info consumers got about products they bought during that period. This was further complicated by the dye’s popularity; lots of people wanted this bright green shade and chose to use it in ways that left uninformed individuals in peril. For example, there are accounts of attendees of a banquet at the Irish Regiment in London bringing green sugar flowers (meant as table ornaments) home to their children, some of whom died after eating them. There are also stories of people finding green pigment in their food that had come off the painted walls of their local bakers.

Finally, Scheele and other scientists assumed arsenic would be safe for consumers as long as they didn’t ingest it (and in sufficient quantities to cause obvious harm, too—because women were knowingly eating arsenic for the sake of their complexions all the time). But in fact, as scientists began to understand in the 1800s and confirmed in the 1900s, arsenic could kill even from a distance. Known as Gosio’s disease, this ailment struck an unknown number of people (mostly children) who inhaled deadly gases released by moldering layers of arsenic-dyed wallpaper. Some scholars believe that Napoleon died of Gosio’s disease.