Most scientific studies only use male subjects. Here’s why that’s a terrible idea. 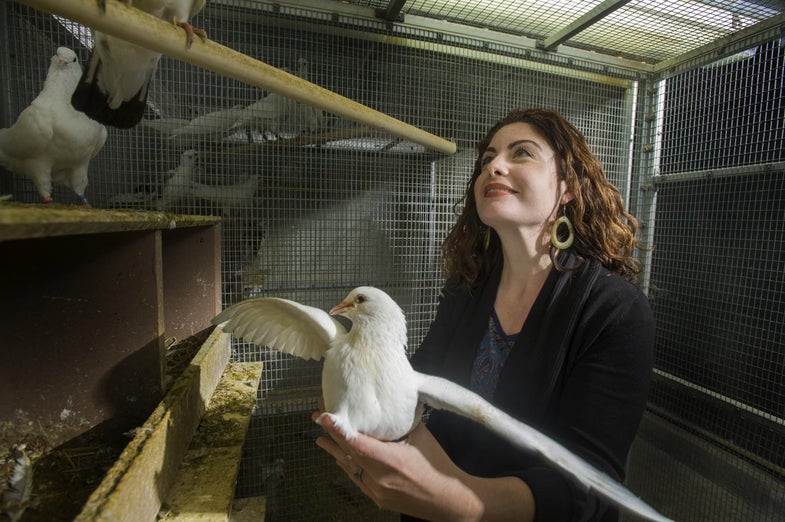 “Pigeons, or rock doves as people call them to be fancy, are fascinating creatures,” said Rebecca Calisi, a professor of neurobiology, physiology, and behavior at the University of California, Davis. “An average person might view them as common or boring or as pests, but pigeons have been unlocking secrets about biology and reproduction for centuries. Charles Darwin even kept pigeons and was, in part, inspired by them.”

Calisi is a co-author on a recent study in the journal Scientific Reports which looked at differences in the genetic expressions of the hypothalamic-pituitary-gonadal—basically the systems that drive us to make babies—of both female and male pigeons. Gene expression is the process by which certain genes are activated or turned on so that they express certain traits. The classic example is eye color: a person may carry the trait for blue eyes, but depending on the other genes they carry, that trait might be expressed as blue, hazel, or even brown. This study is unique not just because of its results, which create sort of foundational framework that others can use to study gene expression in the future, but also because the research actually acknowledges something often ignored in science: that females exist.

Women are woefully underrepresented in science, not just as researchers but also as subjects. Even in animal studies, as many as eighty percent of subjects are male (despite the fact that there are roughly as many women in the world as men). Less than a quarter of the subjects in clinical trials are women. And when trials do enroll women, they’re generally studied only at their most biologically “male-like” (when neither ovulating nor menstruating). It’s a bit like trying to study rainfall on a sunny day. Researchers say that they do this because the ovarian cycle makes studying women “complex.” But, noted Calisi, “This in fact is representational of what the female experience is, so we need to come up with a way to study this.”

In fact, because we don’t study women, we often make them sick. Women are far more likely than men to experience negative outcomes from medication, in part because women metabolize drugs differently. Even your typical flu vaccine, which is calibrated for men, includes twice the dosage your average woman needs. And the female focus hurts men too: women, for example, are more likely to suffer from the disease multiple sclerosis, but their symptoms tend to be milder. What is it about women that both puts them at an increased risk for the disease, but also ameliorates its symptoms? And can it be used to help treat the disease in men?

“There’s sexism at many different levels, and this definitely affects the rigor of the science that is conducted,” said Calisi.

It was the similarities, not the differences, between the sexes that drew Calisi to pigeons. To begin with, male and female pigeons look exactly the same. Pigeons lack sex-specific markings, like the flamboyant feathers that separate peacocks from peahens, or the size differential of male and female bald eagles (the females are bigger). And pigeons, like most birds, have internal genitalia, or testes and ovaries, so you can’t tell a male pigeon from a female pigeon just by looking at it. Finally, like humans, both male and female pigeons care for the young—although unlike human males, pigeon dads also lactate.

“Pigeons produce specialized cells in their crop sacs. When chicks are born, the cells slough off to produce this milky, cottage cheese-like substance that is high in milk, protein, fat, antibodies—lots of good stuff, like human breast milk,” said Calisi. “Hormones like prolactin that help to control lactation in birds are the same ones that human mothers use to stimulate milk production.”

So pigeons seemed like a good place to start. Calisi and a team of researchers including Matthew D. MacManes, a geneticist at the University of New Hampshire, looked at pigeons to ask how genes behave differently in males versus in females. Specifically, they looked at the hypothalamus, which is basically the reproduction control center in the brain; the pituitary gland, which is attached directly below the hypothalamus and produces and secretes many of the hormones; and the gonads, which manifest as the ovaries in women but in males become testes. And all of these systems are present in humans, too.

What they found was that the gene activity differed between males and females in all of these tissues. “Of course, one would expect that males and females would be different when it comes to these tissues involved with reproduction, especially when you compare testes to ovaries,” said Calisi. What was interesting is that the genes differed in the hypothalamus and pituitary too, even when the birds were not actively engaged in reproduction—courting, mating, or caregiving.

“This makes us wonder: does the pituitary contribute to a male being a male and a female being a female?” said Calisi, “What are all of these genes doing? For most of them we don’t know.”

It’s a foundational study—Calisi and her team will continue down this line of inquiry. But it’s the kind of question that can only be raised—and eventually answered—by studying both sexes. Which is why Calisi says that by mainly studying males, “We’re missing out on opportunities to use diversity to broaden the way we ask questions and solve problems.”

“This work was not done to combat sexism,” Calisi added. “We included both sexes because that’s what one should do.”