November 1926: Why Men Will Always Be Better at Sports Than Women

This article originally appeared in the November 1926 issue of Popular Science. You can explore more of our archives–stretching back 140 years–here.

While tennis and golf were possible–if uncomfortable–in the “sport” clothes of the early years of the current century, speed swimming and track and field athletics, the two other branches of sport in which the woman of today has shown the most interest and the greatest ability, were next to impossible. No girl could run fast or swim fast while hampered in every movement by the clinging folds of useless cloth demanded by a convention of false modesty. It was not until the dawn of the present “jazz” age disclosed the startling fact that girls have legs like other people that woman discarded the senseless athletic clothing that had hampered her, and began to make real progress in sports.

It is in swimming that women have approached most closely to the masculine standard. Miss Ederle [Gertrude, the first woman to swim across the English Channel], indeed, has surpassed that standard in some swims in open water. But in the shorter events the men lead by a good margin. Miss Mariechen Wehselau’s women’s world record for 100 yards is 1 minute 3 seconds; Johnny Weissmuller’s men’s world record is 52 2/5 seconds. Miss Ederle’s record for 150 yards is 1 minute 45 seconds; Weissmuller’s record is 1 minute 27 2/5 seconds. 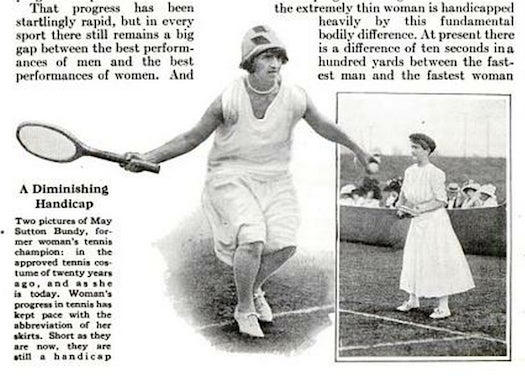 Two pictures of May Sutton Bundy, former woman’s tennis champion: in the approved tennis costume of twenty years ago, and as she is today. Woman’s progress in tennis has kept pace with the abbreviation of her skirts. Short as they are now, they are still a handicap.

Louis De B. Handley is considered to be the world’s greatest authority on swimming. As volunteer coach of the Women’s Swimming Association of New York he developed Gertrude Ederle and many other record-breaking girl swimmers. I asked him if women ever would be as fast as men in the water.

“No,” said Mr. Handley, “they will not. There are biological differences that make it impossible. A woman’s bodily conformation causes too great resistance to her progress through the water. Even the extremely thin woman is handicapped heavily by this fundamental bodily difference. At present there is a difference of ten seconds in a hundred yards between the fastest man and the fastest woman swimmer. Possibly some woman sometime will be able to lessen that difference, but no woman speed swimmer ever will be able to equal the records of men.

“That being so,” I asked, “how do you account for Miss Ederle’s remarkable time for the Channel swim?”

“At the time she made the swim,” he said, “Gertrude Ederle was the fastest swimmer, man or woman, who ever had attempted to swim the channel. Men of Weissmuller’s type are much faster than she is, but they lack endurance for so long a swim. Women have one great advantage over most men for distance swimming–they have more fatty tissue on their bodies, and this fatty tissue increases their buoyancy, increases their endurance, and protects them from cold. Good women swimmers are being developed all the time. But the fastest of them never can hope to be as fast as the fastest men. Man will hold on to his present advantage in the water.”

Golf would seem to be one widely popular sport in which women and men could meet on an equal footing, for in golf skill is of much greater value than strength, Yet in golf the gap between the best women and the best men is as wide as in other sports.

Speaking of her match with Miss Joyce Wethered in the British women’s championsip last year, Miss Glenna Collett, our national champion in 1922 and again in 1925, remarked that Miss Wethered “is as perfect a golfer as a woman can be with the handicap of being a woman.” Asked if she thought that a woman golfer ever would be able to beat a man, she countered by replying: “I’d hate to be able to beat a man!”

November 1926: “Coming Ahead with Giant Strides”

Miss Collett is known as “the girl who can drive like a man.” She can, in fact, drive a longer ball than most men–she averages about 200 yards off the tee–but her drives stop fifty or sixty yards short of the mighty wallops of long-hitting men stars. That is one of the reasons why good men golfers beat good women golfers–their superior driving ability, the result of greater strength and usually of better timing, makes it possible for them to get closer to the green with their first shots.

But it is not only in driving that men golfers are superior. They have more finality–more finishing punch–than women. Their short game is better. Women golfers–with a few outstanding exceptions, of whom Miss Collett is one–do not hit under their approach shots with the same confidence as do the male stays. And, strangely, in putting, a golfing art that requires no strength at all but much delicacy of touch, gentle woman is completely outclassed by blundering, heavy-fisted man!

Read the rest of “Why Men Beat Women at Sports” in our archive.