You Could One Day Be Identified By Your Unique ‘Brainprint’

Our neurons respond differently to the same words 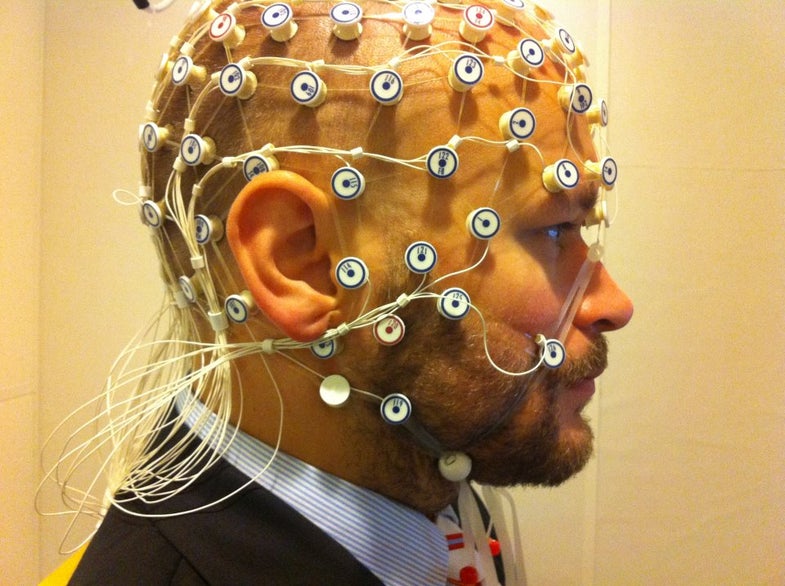 Sometimes, other people interpret your words differently than you may have intended–like you’re not on the same wavelength. Turns out that the neuroscience backs up that idea; words elicit unique neurological responses in different people’s brains, according to a study published in the journal Neurocomputing. This revelation could lead to a whole new way for people to securely access their devices, no passwords required.

In the experiment, researchers hooked up electrical diodes on the scalps of 45 volunteers. While the researchers read various acronyms–such as DVD, CIA–to the participants, their brain waves were recorded with an electrophylogram (EEG). Computer models then looked at the neurological responses and found key differences between individuals. When the researchers later repeated the exercise with the same volunteers, the computer was able to identify the participants based on their neurological responses with 94 percent accuracy.

The researchers think that these variations come from how words tap into subjects’ semantic memory, a part of long-term memory that contains general knowledge about the world (e.g., apples are round, red, and crisp). Even if the information itself is the same, words can bring up associations that vary slightly between individuals, creating a unique pattern of brain waves as the information taps into semantic memory. What’s more, semantic memory has been found to change only subtly over time, making it an interesting new biometric–a quantitative way to differentiate individuals.

Researchers have already developed techniques to identify people by their brain waves, as New Scientist points out. These could be useful to help people sign into computers and other electronic devices more quickly and simultaneously, like a neurological fingerprint. Before they can become widespread in our devices, however, these scanning techniques need to become as accurate at scanning brain waves as they are with fingerprints (and more convenient, because no one wants to stick diodes on their head on all the time).