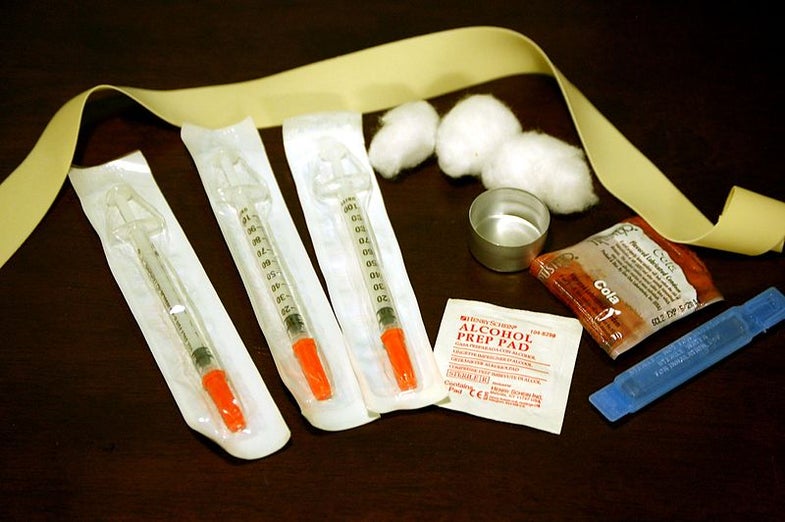 This morning, Governor Mike Pence of Indiana declared a state of emergency in Scott County, in the southeast of the state, due to what is being called the worst HIV outbreak in the state’s history. The cases were all caused by intravenous drug use, but some health officials fear that a rapid, short-term response will not be enough in the face of a large drug abuse problem.

“This is an epidemic,” Governor Pence said in a statement.

Since the middle of December, 72 people from southeastern Indiana have been diagnosed with HIV; in a typical year, Scott County, which has most of the cases, would expect to see only five. All of these cases have been linked to the use of intravenous drugs, many of them to the prescription painkiller Opana, which is likely being used recreationally.

Public health officials in Indiana say that a 30-day-long needle exchange program isn’t going to make much of a difference for people who are using intravenous drugs illegally. “A 30-day program would be much too short,” Kevin Burke, a public health officer in Clark County, told the Indianapolis Star. “You’re not going to help those people long-term.” And an internist from another nearby town said that limiting these types of programs to just one county isn’t going to slow the epidemic in the rest of the region.

Though Pence opposes needle exchange programs, he says that it is necessary to stopping the HIV crisis and that, after the 30-day period, they would re-evaluate the program. His executive order also mandates a “command center” for vaccinations and HIV treatment as well as a public information campaign about HIV transmission. Pence hopes that these initiatives will stop the epidemic before it spreads to the rest of the state.