Antibiotic-Resistant Bacteria Are No Match For Medieval Potion

Recipe from Bald's Leechbook found to be highly effective against MRSA 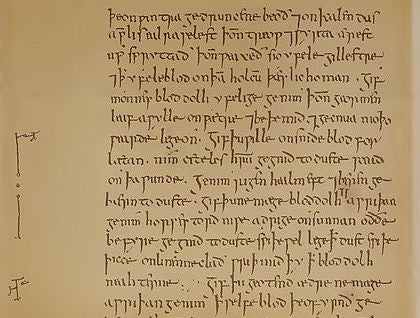 Bloodletting, mercury cures, holes drilled in the head—many ancient medical remedies seem ill-advised based on our modern understanding of medicine. But researchers recently found that a thousand-year-old Anglo-Saxon treatment for eye infections works as an antibiotic against one of today’s most notorious bacteria, Methicillin-resistant Staphylococcus aureus (MRSA). The British researchers will present their findings this week at an annual microbiology conference held in the United Kingdom.

Christina Lee, a professor in Viking studies at the University of Nottingham, translated the recipe from the Old English in Bald’s Leechbook, which was written in the 9th century and is one of the earliest known medical textbooks. The researchers prepared four batches of the recipe, which called for two species of garlic and onions, wine, and bile from a cow’s stomach brewed in a brass cauldron and let sit for nine days before use.

The researchers tested the concoction on cultures of MRSA bacteria in synthetic wounds as well as in rats. No individual ingredient had no effect on the cultures, but the combined liquid killed almost all the cells; only about one in 1,000 bacteria survived. At more dilute concentrations, the salve didn’t kill the bacteria, but still interrupted their communication, preventing them from damaging tissues. Some researchers have been looking into this type of communication interruption as a possible new way to treat antibiotic-resistant bacteria.

“We were genuinely astonished at the results of our experiments in the lab,” Lee said in a press release. The researchers hope to recreate more ancient elixirs to test them against modern medical conditions and bacteria.