The Type 055 destroyer will be China's most capable warship, with up to 128 vertical launch cells for missiles, and four very powerful radars. (This CGI accurately represents the integrated mast and its electronic support measure antenna, though there should be an anti-stealth radar in the place of the satellite communications nodes on top of the dual hangars.). Errymath
SHARE 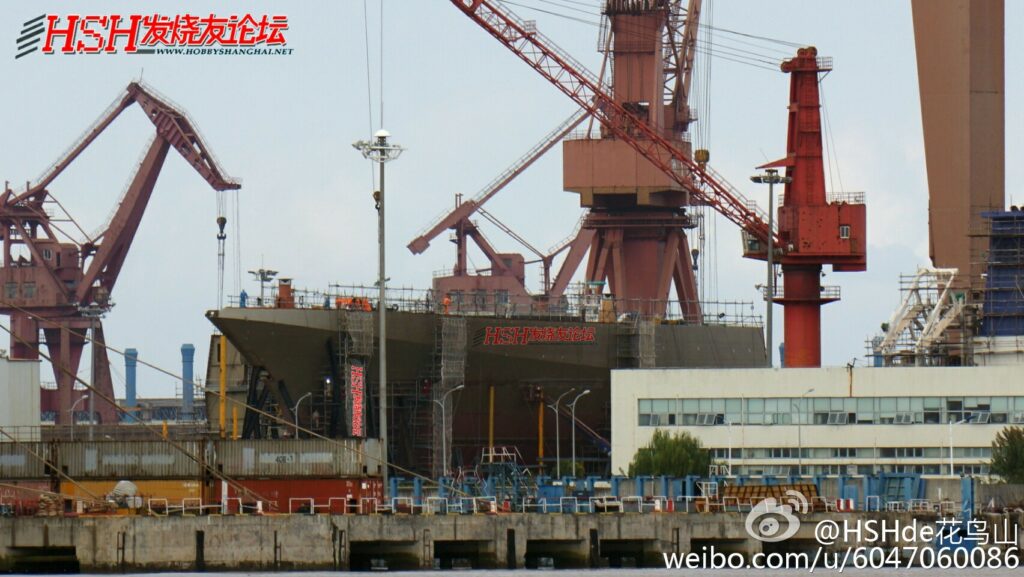 At the Jiangnan Changxing shipyards in Shanghai, the bow section of the first Type 055 has been assembled. Notice the angular gunwales, and apparently enclosed deck.

In the Jiangnan Changxing shipyards, one of China’s largest shipyards, the next generation of Chinese warships is taking shape. The first Type 055 destroyer began construction in 2015 and is expected to have a full displacement of over 14,000 tons. This would make it the largest non-capital surface warship built in Asia since the World War II era Imperial Japanese Tone class cruisers. The Type 055 will be launched in late 2017 or early 2018, making it not just one of the most powerful warships in Asia, but the world. At the center of the photo, you can see the stern module of the Type 055, with several openings under the helipad; those openings deploy variable depth and towed array sonar; the Type 055’s large size gives it the potential to load future defenses like anti-torpedo measures, as well as unmanned surface vehicles and submersibles.

New photos from the Chinese Internet show a number of interesting developments. The bow (forward) and stern (rear) sections of the Type 055 are already completed; construction begins by building sections of the hull, and then those sections are assembled, like Ikea furniture, in a drydock. The bow section shows a highly hydrodynamic hull, optimized for high speed performance, with stealth characteristics such as angular gunwales (the top edge of the hull sides) and an apparently enclosed deck. The stern, which will have the modules for the Type 055’s helicopter twin hangar attached later, has at least four portals for current and potential future sensors and weapons like towed array sonar, variable depth sonar, towed torpedo decoys and active torpedo defenses. This indicates the Type 055 will have a formidable organic anti-submarine capability, perhaps with historic Chinese vulnerabilities to enemy submarines designed in mind. 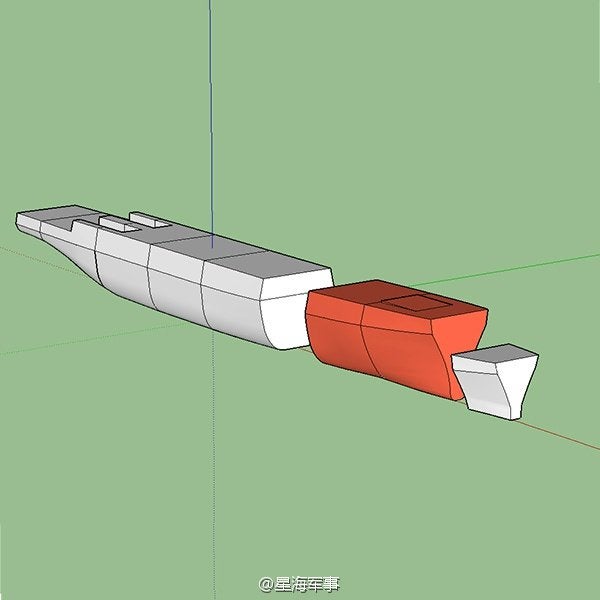 The bow modules (highlighted in red) and the stern (last two modules) have already been laid down; the other modules are still under assembly.

Referencing both the first Type 055 under construction, and the landlocked “ground warship” electronics test rig at Wuhan, the Type 055 will have four large AESA radars for 360 degree situational awareness, and the associated command and control facilities to manage its large arsenal of up to 128 vertical launch system (VLS) cells, artillery and electronic warfare systems against enemy threats, as well as multi-domain joint operations with other Chinese assets. By enclosing various sensors and communications antennas in an integrated mast, the design also improves stealth.

The Type 055 destroyer will be China’s most capable warship, with up to 128 vertical launch cells for missiles, and four very powerful radars. (This CGI accurately represents the integrated mast and its electronic support measure antenna, though there should be an anti-stealth radar in the place of the satellite communications nodes on top of the dual hangars.)

The size of the Type 055 brings added current and potential capabilities just from its scale. The Type 055’s large displacement allows it to berth multiple helicopters or even, in the future, such technologies as multiple drones or unmanned surface and underwater vehicles. The Type 055’s large size also might comes in handy for carrying supplies and consumables during global deployments. Though not in the design now, the size also offers the potential for future improvements of integrated electrical propulsion and, down the line, next generation weapons like lasers and railguns if those technologies mature.

The Next New Chinese Warship Arrives on Land