China’s Coast Guard Arms Up With a New Warship 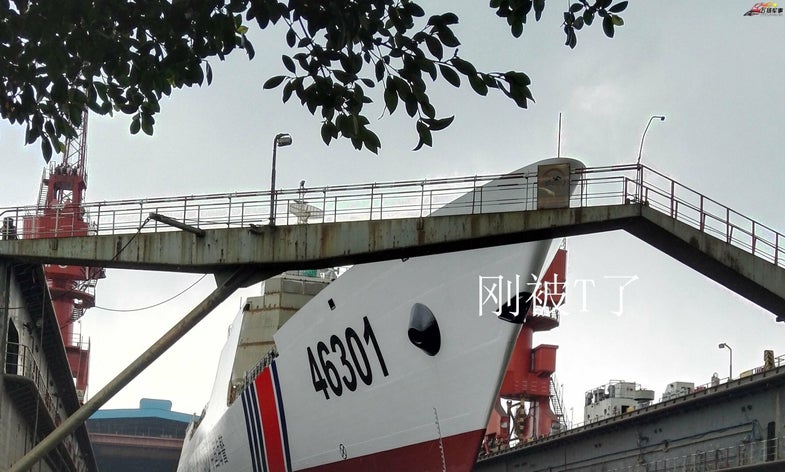 "46301" will bridge the gap between the CCG's enormous 12,000 ton Haijing 2901 and 3901 cutters, and a multitude of smaller ships under 2,000 tons. Using the Type 054A frigate hull, the "46301" and other Type 818 cutters will have facilities for carrying large numbers of CCG personnel and aircraft, and range, speed and endurance for long range maritime missions. Xinhui via China Defense Forum
SHARE 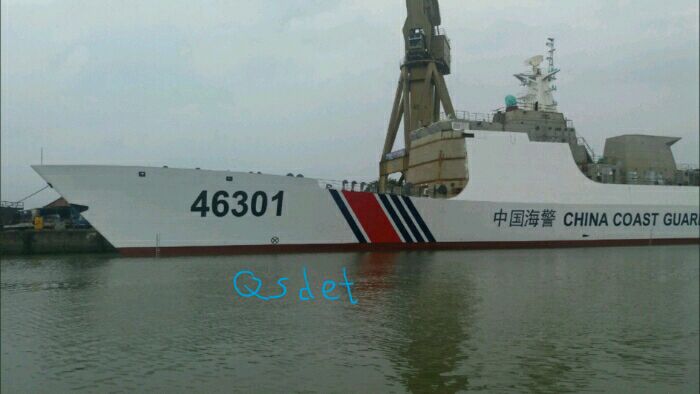 “46301”, the first of the CCG Type 818 cutter, brings a large and modern platform for China’s maritime paramilitary activities, with a full range of aviation and long range capabilities.

In recent disputes with its neighbors, China’s civilian maritime forces, such as its Coast Guard and “fishermen militia”, have played key roles in acting on behalf of Chinese claims in the East and South China Seas. Thus, recent moves to upgrade its equipment matter greatly for regional security. 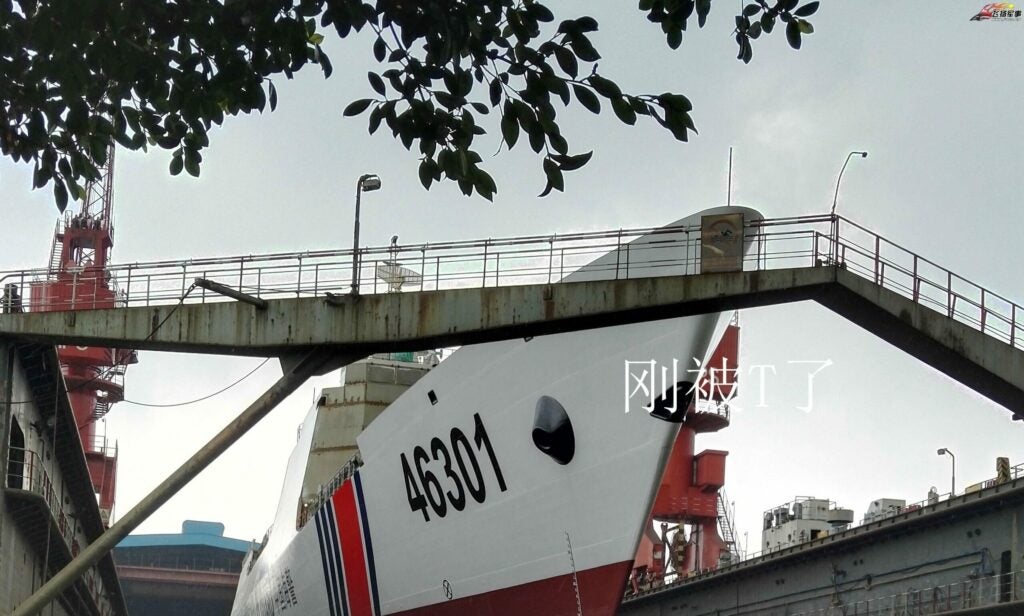 It Comes in White

“46301” will bridge the gap between the CCG’s enormous 12,000 ton Haijing 2901 and 3901 cutters, and a multitude of smaller ships under 2,000 tons. Using the Type 054A frigate hull, the “46301” and other Type 818 cutters will have facilities for carrying large numbers of CCG personnel and aircraft, and range, speed and endurance for long range maritime missions.

Already, the Chinese Coast Guard operates two of the largest Coast Guard ships in the world, a pair of 12,000 ton cutters that are even larger than US Navy Ticonderoga cruisers. Now, the Chinese Coast Guard is getting a cutter built off of an actual warship hull. “46301”, undergoing fitting at its shipyard, is based off the prolific Type 054A frigate, a 4,000 ton warship of which the PLAN will have a total of 24 in service. 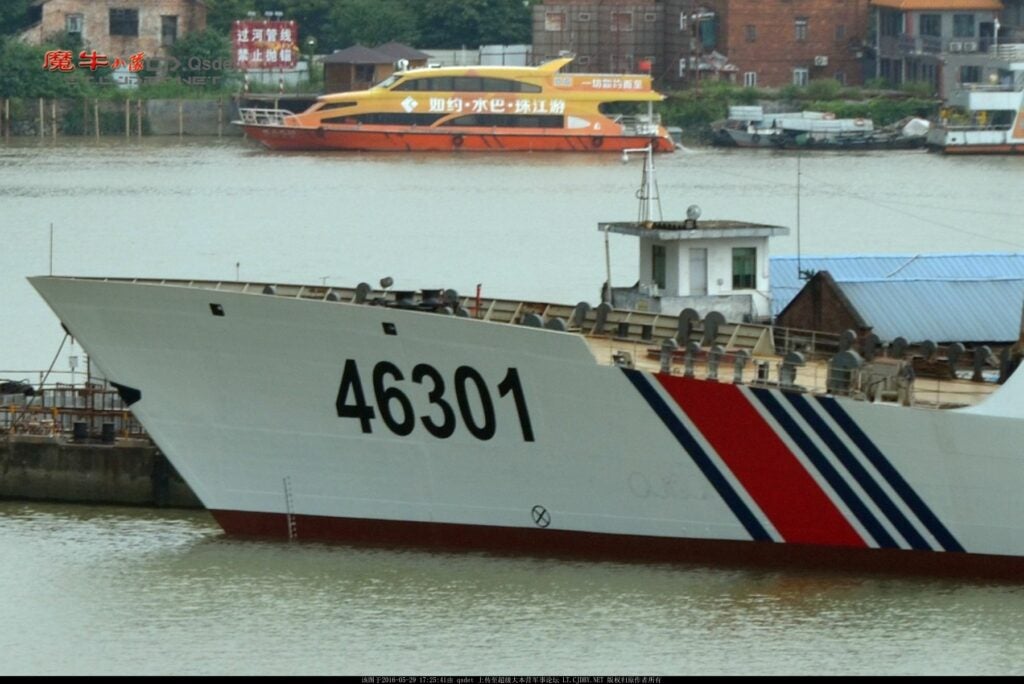 For Civilian Purposes, Of Course

“46301” dispenses with the Type 054A frigate’s 32 VLS cells that carry air defense missiles and anti-submarine torpedoes, but keeps the PJ-26 76mm cannon. It will also likely have water cannons and multiple autocannons and machine guns.

Already painted in the white, red and blue color scheme, “46301” will have several differences from its PLAN sister ships; it does not come equipped with the 32-cell vertical launch system (VLS) for air defense missiles and anti-submarine torpedoes, or YJ-83 antiship missiles, and its sensors are likely to be civilian purposes. However, it is likely to retain the frigate’s 76mm PJ26 cannon, have heavy pressure water cannons and be fitted with 30mm autocannons and heavy machine guns to handle small boats. “46301” can also use its large size to fit in a larger contingent of armed personnel for boarding and inspection action, hold prisoners and contraband, and conduct global missions like antipiracy. 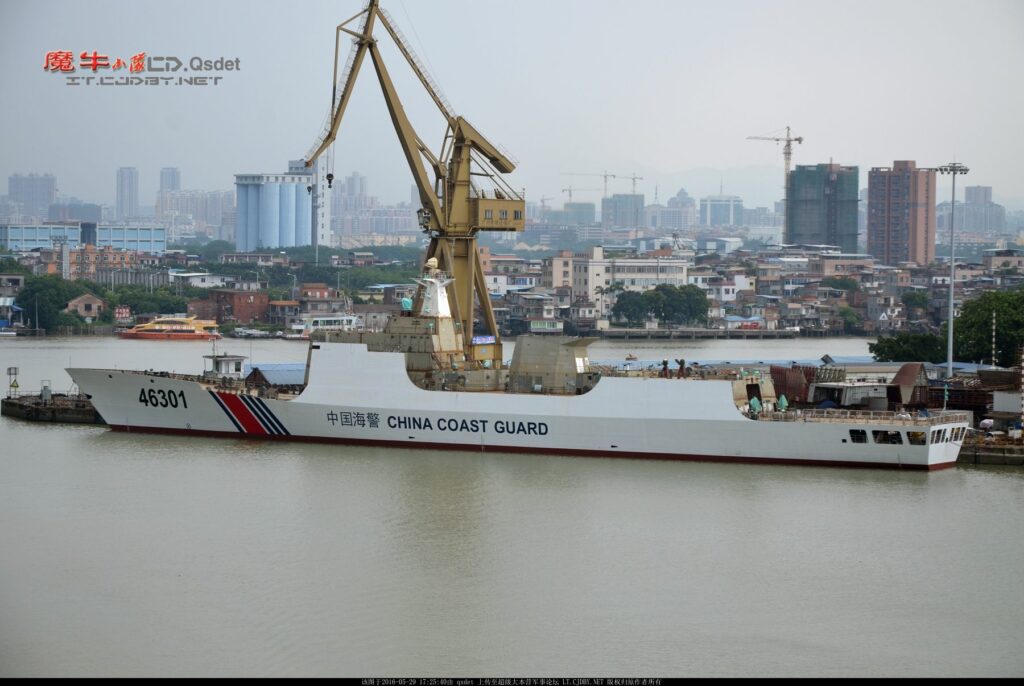 Upping the Stakes and Players

The Chinese Coast Guard and other non-military actors in China’s maritime security likely enjoy even greater operational capacity from new platforms like the Type 818 cutter.

Utilizing a warship class for Coast Guard service follows the precedent the Chinese Coast Guard already set of operating several cutters based on the 1,700 ton Type 056 corvette, but takes it up a level in scale of size and capability. A surface warship hull offers several advantages; the Type 054A’s four diesel engines give it excellent fuel economy, relatively high speed and an un-refueled radius of 8,000 miles.

The Type 054A is also much larger than most of the Chinese Coast Guard’s smaller cutters and decommissioned frigate, which gives it more capability in rescue, search, interdiction and sovereignty enforcement missions (including ramming enemy ships) by virtue of its larger size and crew. Its size also gives room for a hangar to operate helicopters and drones (shipborne aviation capability, whether manned or unmanned, is a growing need for the Chinese Coast Guard), which are good for catching illegal fishermen or challenging foreign aircraft. Perhaps most importantly, since the Type 054A is far larger than even most Southeast Asian naval warships, its presence in disputed water would also give China a psychological deterrent in any standoffs with civilian, coast guard, or even navies from neighboring states.

The South China Sea Arsenal: These are the Chinese Weapons Deployed on Disputed Islands