How Dangerous Is The Chemical Spilled Into West Virginia Waters?

Prolonged exposure to high concentrations of 4-methylcyclohexane methanol can cause headaches, eye and skin irritation, and difficulty breathing. 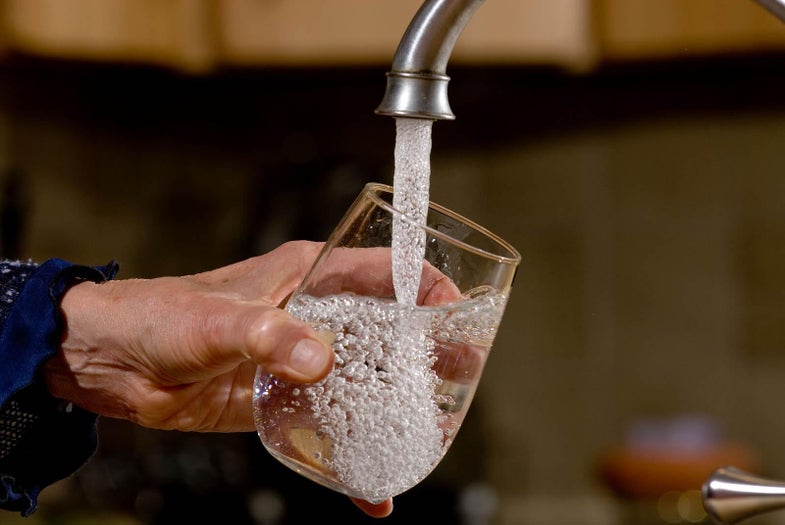 At a chemical plant near Charleston, W.V., a 48,000-gallon tank of 4-methylcyclohexane methanol, or MCHM, was found to be leaking into the Elk River yesterday (January 9). The leak has put the drinking water of about 300,000 people in jeopardy, and officials have told residents in nine counties not to drink tap water. But just what is this chemical and how dangerous is it?

MCHM is a solvent used to rinse coal. According to CNN:

The leaked chemical… is harmful if swallowed, said Thomas Aluise, a spokesman for the state’s Department of Environmental Protection. It is used to wash coal before it goes to market.

“When coal comes out of the ground, it’s got pieces of rock, it’s got other things that are associated with the coal-mining process that aren’t coal — mainly rock and dust and things like that, so it’s sent to a cleaning plant,” said Phil Smith, director of communications for the United Mine Workers, in a telephone interview.

It is unsafe to come into contact with, at least when it is undiluted, as the New York Times reports:

The chemical, which smells like licorice, can cause headaches, eye and skin irritation, and difficulty breathing from prolonged exposures at high concentrations, according to the American Conference of Governmental Industrial Hygienists. Officials in West Virginia said they did not know how much of the chemical had leaked into the river or what its potential health impact might be.

The state’s order not to drink tap water or use household water to bathe, brush teeth, supplement infant formula or cook was made in an abundance of caution, officials said.

“We don’t know that the water is not safe, but I can’t say it is safe,” Jeff McIntyre, president of West Virginia American Water Company, which supplies most of the household water in the area, said at a news conference on Friday. “The only appropriate use for this water is toilet flushing.”

Without knowing how much MCHM has been spilled, as that figure hasn’t yet been released, it’s unclear what the concentrations might be in tap water and what the health effects might be. But that will hopefully be ascertained relatively quickly, as an investigation has been launched by U.S. Attorney Booth Goodwin, as well as several federal and state agencies. This is only the ninth time that a federal emergency has been declared due to concerns about chemical or biological contamination.