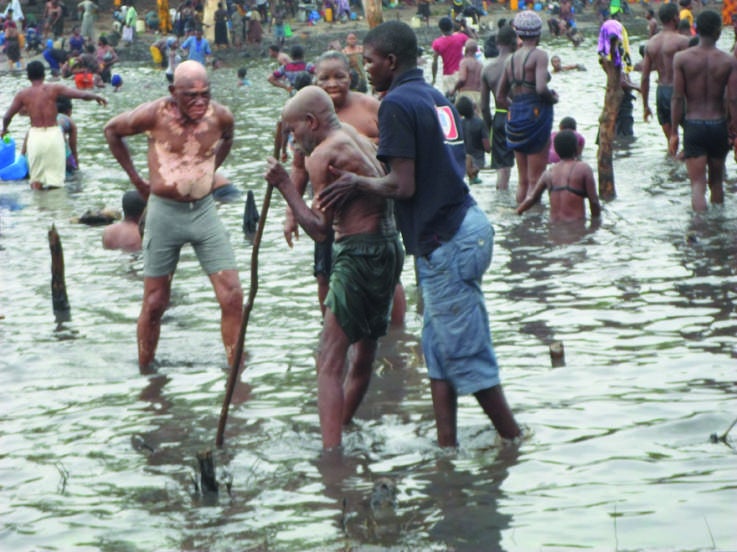 Miracles come in all shapes and sizes: sometimes it’s a cat wandering home after years away; sometimes it’s an all-powerful deity impregnating a young virgin with a clone of himself.

Surprisingly often, though, the miracle involves the magical healing power of water. Consider what’s currently happening in Nachi, a small village in Nigeria where hundreds of people are flocking to a river said to have mysterious healing powers.

It all began back in November, when a Fulani herdsman reported that the river mysteriously appeared behind him moments after he had crossed dry land. He informed his relatives, who checked out the river and determined that it had magical healing properties.

As of this writing, not a single person has identified himself as being healed by the water, but humans rarely allow facts to get in the way of a good story. Thus, people are traveling from far and wide to bathe in and drink the magical water – and yes, they’re doing it in that order, leading many to worry that this will lead to an outbreak of disease (though many believers are digging on the banks of the river in the hopes of accessing water that hasn’t been tainted by bathers).

There’s certainly precedent for “miracle” water causing more harm than good – in 1858, the Virgin Mary supposedly appeared before a young girl and gave her the location of a spring in Lourdes, France. Rumors spread that the water had magical healing powers, and so people have flocked to Lourdes ever since to bathe in and drink it (and again, yes, in that order). In 1894, writer Émile Zola visited and described the water as containing “threads of blood, sloughed-off skin, scabs, bits of cloth and bandage, an abominable soup of ills… the miracle was that anyone emerged alive from this human slime.”

Things haven’t improved much, apparently. In 2008, on the 150th anniversary of the Virgin Mary’s appearance, 190 cases of norovirus infection across four countries were linked to pilgrims collecting water at Lourdes.

The possibility of actually contracting new diseases isn’t the only danger of miracle healing water – there’s also the danger of water being used as a substitute for actual medicine. Celebrities like Magic Johnson, who reportedly visited the Tlacote el Bajo springs in Mexico after he tested positive for HIV, lend credence to the idea that these waters will heal diseases better than conventional treatments. Decades later, Johnson’s trip to Tlacote is still being cited by people to explain his longevity.

That said, many of the people who flock to these magical waters don’t have a conventional treatment to give up. They’re often poor, with no access to good healthcare. Or, they may be struggling with illnesses that don’t have a cure, anyway. Miraculous water springing from the ground, free for the taking, is sometimes the only hope they have.

Healing waters will lose their appeal only when people worldwide have access to good healthcare, and of course, good education. In 1953, government officials in Shanghai tempered an outbreak of holy water fever in part by providing people with magnifying glasses so that they could see the microbes living in the water, and by explaining that there were 4.2 million colon bacilli in one cubic centimeter. (Miracle water was apparently all the rage in the 1950s at the dawn of the People’s Republic of China. You can read about the Shanghai example as well as many other fascinating tales of healing springs and their political ramifications in this article, though sadly I cannot find it available for free anywhere.)

Here’s hoping that by the time the Nachi river recedes, no one is worse off than they were before. At least, according to this news report, the local cabbies will be much, much better off.