Washing Dollar Bills With Carbon Dioxide Could Save Billions 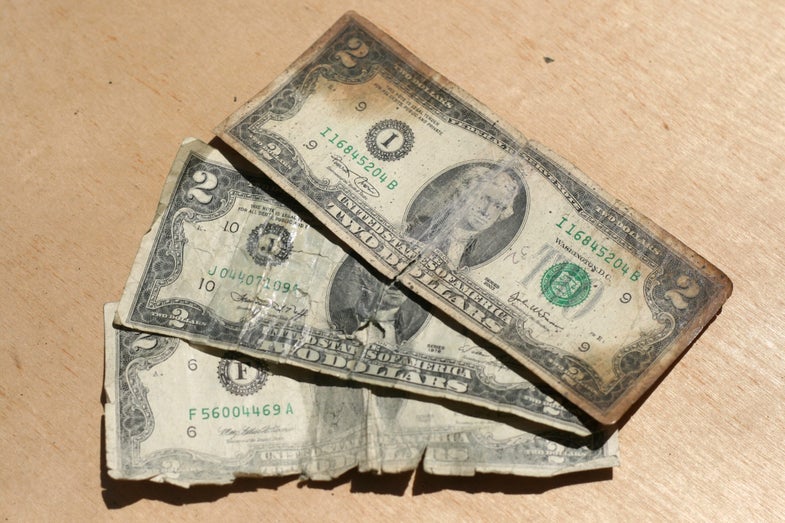 Nothing is better than a crisp, brand new George Washington bill that a vending machine gobbles up. And nothing is more frustrating than trying to flatten out an old, grimy, torn-up one dollar bill that a vending machine refuses to take. Thankfully, scientists have developed a new way to clean paper money and to prolong its life. The primary source of a banknote’s aging and eventual yellowing is human sebum, the oily waxy substance the body produces. When the body makes just the right amount of human sebum, it protects the skin. Too little causes dry, cracked skin and too much terrorizes teenagers with acne problems. Not only does this sebum clog pores, but over time it builds up on the surface of dollar bills where it reacts with oxygen in the air and turns an aged yellow.

A bill typically lasts about 3 to 15 years before becoming too dirty and taken out of circulation by central banks. The world’s treasuries print out almost 150 billion new banknotes annually, an expense of about $10 billion. And with the addition of these 150 billion crisp new bills, about 150,000 tons of old bills end up in the shredder for disposal – out with the old and in with the new. A team of scientists decided to see if they could clean money by getting rid of the build up of human sebum.

Scientists successfully removed the human gunk and motor oil from dollar bills by using supercritical carbon dioxide, a fluid commonly used in other cleaning processes that acts like both a gas and a liquid. The bills’ security features such as holograms and phosphorescent inks stayed intact, safely and effectively preserving the banknotes. This cleaning method could prevent bills from becoming the the ratty, old ones that vending machines hate and that eventually need to be disposed of. No clothes line needed.