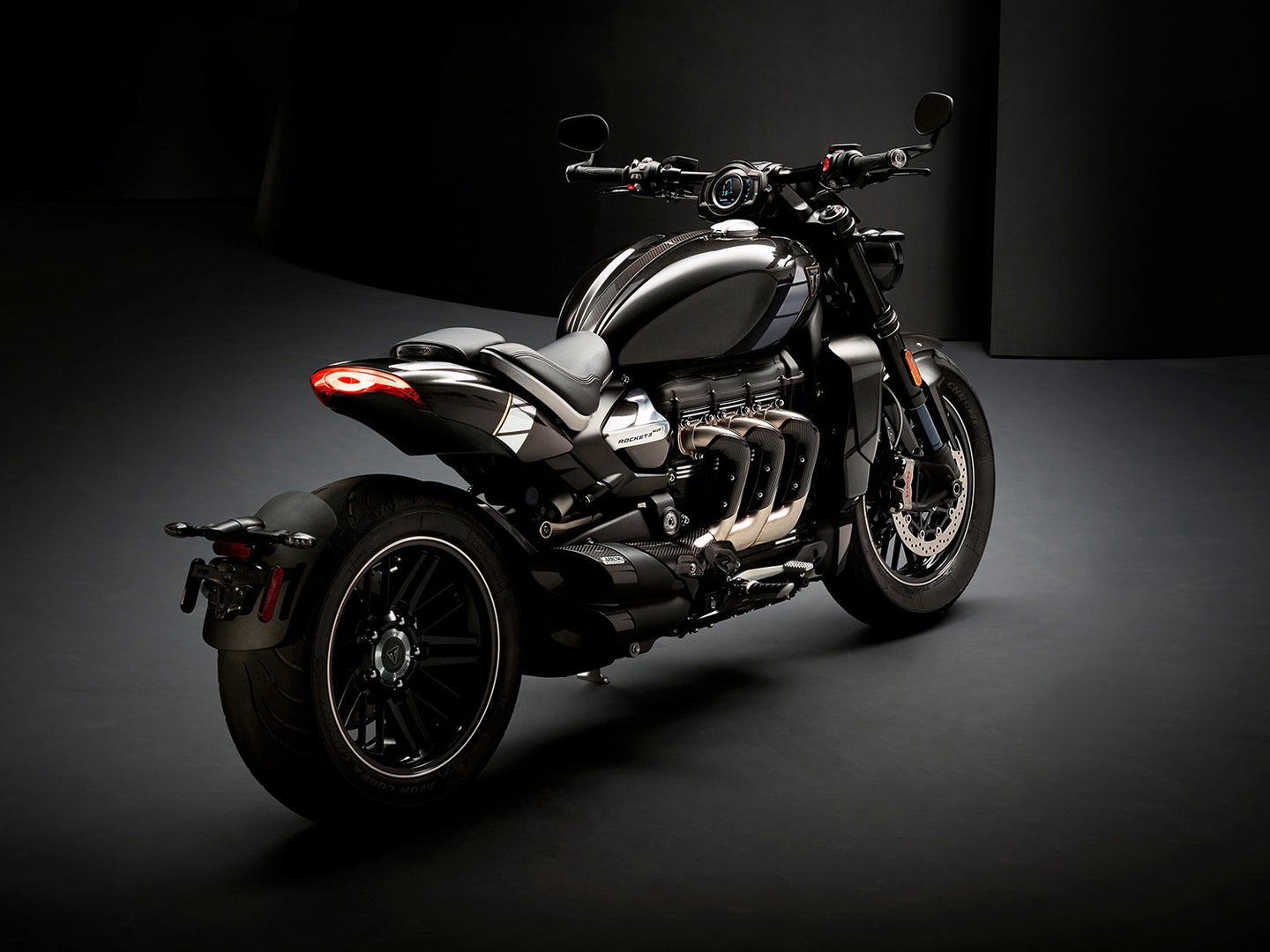 Back in January, Triumph wowed us with the announcement of its new Triumph Factory Custom series, a line of ultra-premium limited-edition models that would pack top-shelf components and accessories (and in some instances completely unique one-off bits) available in a limited production run of 750 units worldwide, for each model.

The first model of that series, the new Triumph Thruxton TFC debuted as a lighter, more powerful, and more exclusive version of the Thruxton R, and we were duly impressed. Then Hinckley teased us with a hot-rodded working concept of the next bike on deck, the Concept Rocket 3 TFC, a full-tilt bored-and-stroked behemoth that claimed an all-new triple-cylinder engine.

And now comes that bike in all its official production glory, rolling with a massive new 2,500cc Triumph triple engine, a muscular presence, up-spec technology, a refined design, and an impressive level of premium specification equipment.

The original 2,295cc Rocket III was already a show-stopper when it launched in 2004, and this follow-up improves on the tank-like original’s lines with a cleaner, more elegantly swept demeanor that reshapes the fuel tank, tucks in or ditches much of the bodywork from yore, and sleekens the silhouette for a lighter visual load. The attitude adjustment is subtle though, and the 2019 Rocket 3 TFC still brings some swagger with those 20-spoke cast aluminum wheels and the signature 240mm rear tire.

But the main attraction has to be that whopping, all-new 2,500cc triple, which once again claims the title of “largest production motorcycle engine in the world.” It also claims to have the highest torque of any production motorcycle, with Triumph indicating a peak number of “more than 163 pound-feet.” It stands to reason that Triumph would piggyback on that claim by also alleging the new Rocket 3 TFC is the most powerful Triumph to date, with 168 hp said to be on tap, or 13 percent higher than the first-gen Rocket III.

The higher-capacity 2019 Rocket TFC powerplant, says Triumph, is central to its “class-leading performance.” Hinckley also boasts that the massive triple delivers a “staggering 70 percent more torque than its closest competitors,” but we’re not exactly sure who that would be. Regardless, the triple engine brings premium components to the table, like state-of-the-art lightweight titanium inlet valves to allow for higher revving, and custom-made Arrow mufflers with high-zoot carbon-fiber end-caps to push out the spent gases.

The Rocket 3 TFC cradles the big triple within an all-new aluminum frame that uses the engine as a stressed member for mass optimization, and also helps bring weight down by a significant 88 pounds so you’ll feel the engine’s added juice even more. The new aluminum single-sided swingarm, lighter engine components, carbon-fiber bodywork, and leaner braking components help the Rocket 3 shed pounds as well.

In the cockpit, controls and displays have been upgraded as well, with the latest full-color TFT instruments adding major boost in functionality; riders can choose from two information layout themes and can personalize their start-up screen. On the screens, you can choose from four riding modes (Road, Rain, Sport, and Rider-Configurable) that act to adjust the throttle map and traction control settings to either suit riding conditions or your own preference. The Rocket 3 TFC also comes with cruise control, Triumph Shift Assist, and Hill Hold Control as standard features; Shift Assist allows for clutchless shifts, while Hill Hold stops the bike from rolling backward on an incline. Added convenience and security features include a keyless ignition, Tire Pressure Monitoring System (TPMS), and a USB charging socket.

RELATED: The most exciting electric motorcycles of 2019

Then there are the premium details that remind you of the TFC’s pedigree—things like a genuine leather interchangeable dual or solo saddle standard (with an infill pad supplied for the single-seat setup); a single-sided swingarm; sexy, sculpted three-header exhaust; and premium TFC badging with gold detailing. A pretty-sweet-looking numbered plaque on the instrument mount, each one totally unique, seals the deal. Additionally, every Rocket TFC owner gets a tailor-made TFC hand-over pack which includes a letter signed by Triumph’s CEO Nick Bloor, a personalized custom build book, leather rucksack, and a TFC indoor bike cover.

As we said earlier, only 750 of these beauties will be available worldwide, with 225 units slated for North America. Pricing is set at $29,000 (US). Once the production run is done, it’s done and won’t be repeated, says Triumph. More exclusive TFC models are in the works, so we’ll be keeping a sharp eye out.