The FCC speed test app tests your internet speed in order to get a better picture of broadband access across the country. 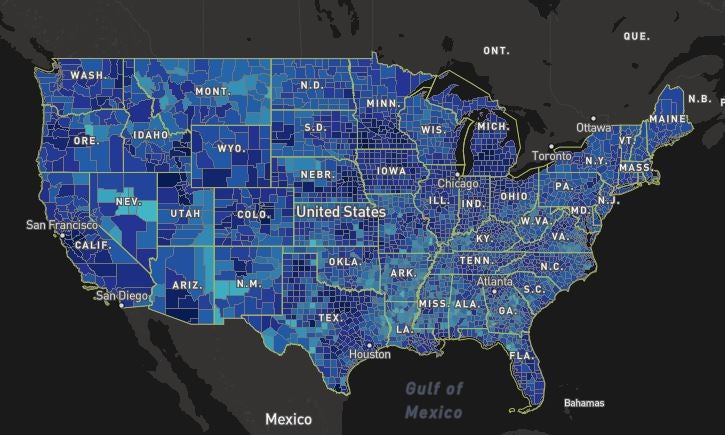 The FCC broadband coverage map can be hard to interpret. FCC
SHARE

How many people in the United States have access to reliable, high-speed internet connections? It seems like a relatively straightforward question to answer. Unfortunately, the data becomes extremely complicated once you start digging. The coverage maps are confusing, and massive telecommunications companies benefit from a relative lack of competition. Now, however, the FCC is trying to get a handle on what US internet access really looks like, and the Commission is urging people to use its Speed Test app to provide concrete data.

In a statement Monday morning, FCC’s Broadband Data Task Force encouraged people around the country to download and use the app as part of a renewed effort to create accurate broadband access maps. It’s a joint project that involves consumers, as well as tribal, state, and local governments to provide accurate data and feedback about the real-world experiences with broadband access. The app has been around since 2014 in some form or another, but it started to get regular updates again at the end of last year after a nearly two-year hiatus.

The app itself is available in both the Apple App Store and the Google Play Store, and it works similarly to other familiar internet testing apps like Netflix’s Fast.com or Ookla’s more robust Speedtest.net. Starting the test will upload and download some information while tracking how long the process takes. It will then show you your results and share them with the FCC. According to the FCC statement, “We expect that some of the information collected through the app will be incorporated into the Commission’s broadband data collection systems, including challenges to provider-submitted maps and our collection of additional crowdsourced data.”

The app will run a test when you ask it to, but it will also run random tests once in a while in order to get a better sample of your speeds. You can put a cap on your usage from the app so it doesn’t consume all your mobile data.

How will the FCC speed test app improve broadband access?

Right now, broadband policy and public data is muddy and difficult to interpret. For instance, the broadband coverage map looks relatively robust. When you start digging, however, you’ll see many provider options that offer 25 Mbps of download speeds, but only 3 Mbps of upload. Those are paltry numbers (especially on the upload side) in the era of Zoom schooling and remote work.

Even in areas that appear to have several high-speed options, several of them are often satellite providers of varying quality that can meet the minimum overall speeds, but don’t necessarily offer the kind of rock-solid connection required for crucial internet activities like virtual meetings.

The FCC hopes an evidence-based model for collecting this information will provide a more accurate picture of the current status that allows it to direct its funds and efforts more effectively.

Right now, some credible estimates suggest that well over 100 million people in the US lack a fixed internet connection (meaning, a connection that’s non-satellite) that meets the already-low definition of broadband. The coronavirus response and stimulus bills have already attempted to kickstart some programs to help especially underserved areas.

Not everyone is excited to add another app to their device, but the FCC also has methods for people to submit information about their broadband experience. You can file an informal complaint through this form about specific issues you may have with individual providers. That’s separate from the app initiative, but falls under the same regulatory umbrella.

Ultimately, the FCC claims that the better the data it has, the more effectively it can adjust its efforts to provide people with more usable and reliable access to the web. So, even if you download the app and later delete it, that real-world data point could come in handy for programs down the road.