The bots, which can hit a top speed of 4.5 mph, will patrol a base in Florida. 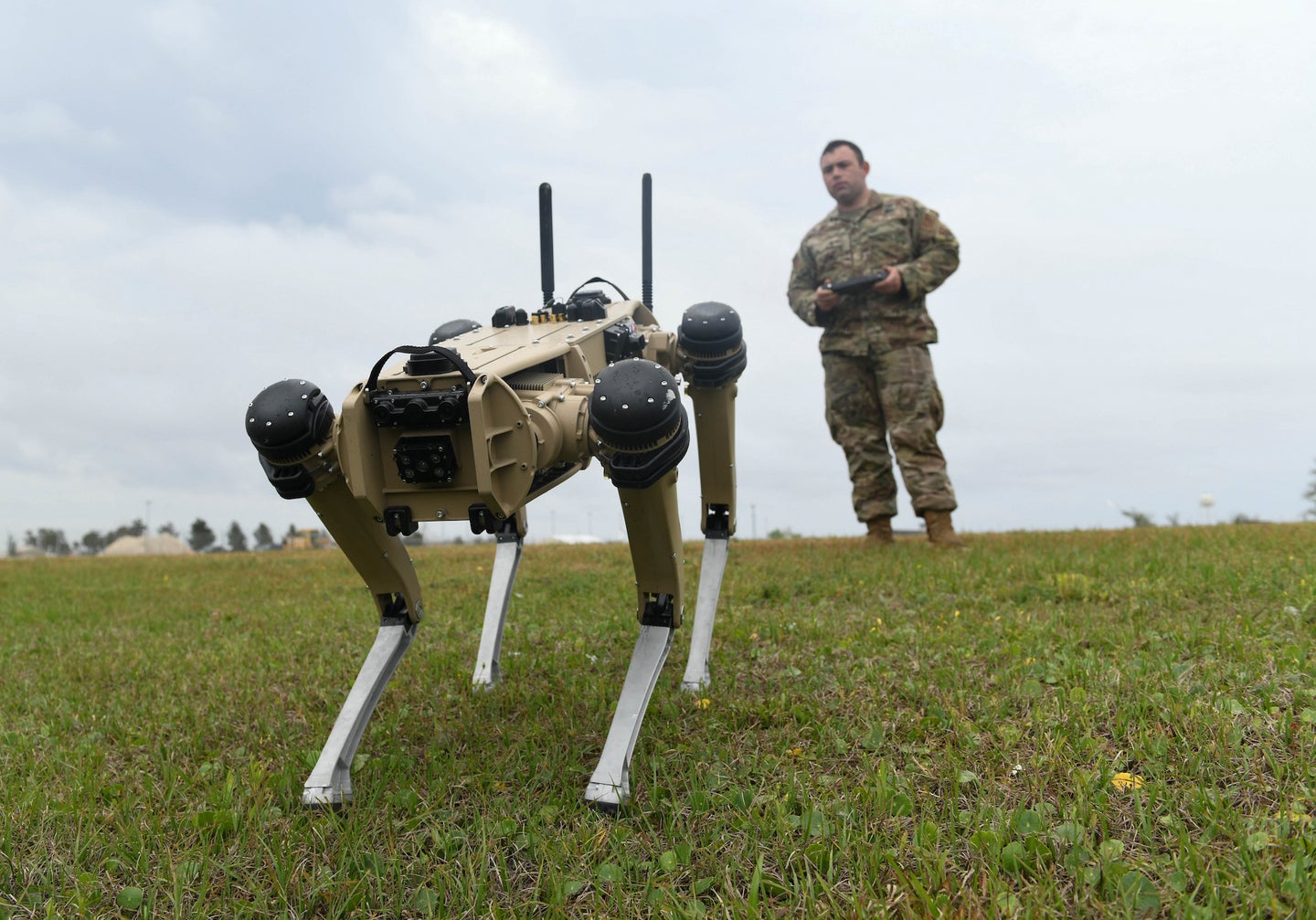 The Air Force is enlisting robot dogs to protect the airbase it has branded its “Installation of the Future.” Last week, Tyndall Air Force Base announced that it would be patrolled by quadrupedal machines built by Ghost Robotics. The initiative is part of a bold vision for tech-centric security at the Florida facility, located just outside Panama City.

In military parlance, the robot is a Quad-legged Unmanned Ground Vehicle, or Q-UGV. The specific model is billed as a Vision 60, and is part of a broader family of robots categorized by role and size. The Vision is the government and enterprise version, although Ghost also makes a Spirit model for university and research purposes. Wraith, a planned future model, will be destined for further military applications.

Vision 60’s four-legged design immediately calls to mind the doglike robots of Boston Dynamics, though that company is hardly the only name in the field. So why use bots with legs? While the military has had robots that roll on tracks, like a tank, for years, those machines are limited in application. Tracks are useful for crawling over uneven terrain and trench-like gaps, but they are also slow, and cannot handle steep slopes or rubble-filled fields nearly as easily as a four-legged machine. The Vision 60’s legs propel it at a top speed of about 4.5 mph, or slightly faster than the typical walking pace of a person.

“As a mobile sensor platform, the Q-UGVs will significantly increase situational awareness for defenders,” Mark Shackley, who manages a security forces program at Tyndall, said in a release. “They can patrol the remote areas of a base while defenders can continue to patrol and monitor other critical areas of an installation.”

Ghost describes the Vision 60 robots as semi-autonomous, meaning the machines have sensors that help them navigate routes on their own, while still accepting commands from humans. For its own mobility, the Vision 60 typically uses lidar to sense the world around it with lasers. It can also infer pressure from the electrical motors in its legs, allowing it to navigate while walking in terrain it cannot see.

Jordan Criss, commander of the security force at Tyndall, noted in November 2020 that these robot rovers could be controlled from a VR headset. “We will be able to see exactly what the robot dog is detecting through its mobile camera and sensor platform if desired, we will also be able to issue verbal commands to a person or people through a radio attached to the dogs.”

[Related: A new legged robot wants to wobble, crawl, and bounce its way into the market]

To aid humans, these sensors include a high-definition video stream, thermal imaging, and possibly infrared, too. Provided there is data connection, that robot-recorded video can be sent to the android tablet operated by a human overseer, who can then see what the robot is looking at.

Like the dogs it imitates, the Vision 60 can crouch and also crawl while crouched. This can help conceal the robot among tall grass or behind cover, and it can also allow the robot to navigate through smaller spaces.

Navigating amongst rubble isn’t just a concern about future battlefield conditions. In 2018, Hurricane Michael devastated Tyndall, damaging hangars and 17 F-22 stealth fighter jets that the Air Force failed to evacuate in time. In the wake of that storm, the Air Force decided to spin the base’s decimation as an opportunity to rebuild it as a modern technology showcase, with everything from 5G connections to patrols by robot dogs.

“One huge attraction piece of the robot dogs is that it’s highly mobile and with the amount of construction we will face over the next few years it helps us maintain and increase our security posture,” said Krystoffer Miller, who supports security services at the base

[Related: Marines are testing a robot dog for war]

Base security is an especially fitting role for four-legged robots, a tool the military has long explored but has yet to find a satisfactory use for. Previous attempts to use four-legged robots as squad-support pack mules in rough terrain were scrapped over the robots being too loud.

Other attempts at using robot dogs as battlefield scouts and lighter pack animals persist, and will likely benefit from what the military learns in patrols at Tyndall. Routine rounds on the base, where the robots can be easily recovered in the event of a mishap, could build a database of useful sensor data, which in turn can train future autonomous features for quadrupedal robots.