There’s No Way In Hell This Is The Apple Car 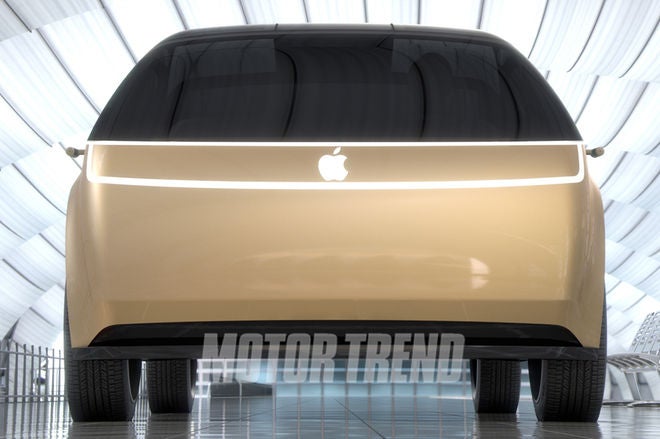 The magazine drafted designers to come up with their vision of the rumored electric vehicle in a June 2016 cover story. Motor Trend
SHARE

Last night, Motor Trend magazine tweeted this from its official account: “Check back tomorrow to see if we found the #AppleCar,” along with a severely-cropped image of a gold-colored vehicle with a silver hubcab, the latter emblazoned with Apple’s recent logo.

As it turns out, the magazine did not find the Apple Car. Instead, Motor Trend drafted faculty and students from the ArtCenter College of Design in Pasadena, known for its influence on auto design, to create entirely speculative renderings of what an Apple Car might look like. The magazine then created a lengthy cover story chronicling their design process, which was published today, alongside a few other pieces where industry experts opine on this hypothetical vehicle. Since Motor Trend‘s piece contained no authentic information about Apple’s actual long-rumored plans to develop a car, it shouldn’t surprise anyone the response from other tech and auto journalists to the article was not kind.

To Motor Trend‘s credit, the magazine did get many of us who are interested in tech, Apple, and the future of transportation talking about its article today. No publicity is bad publicity, right?

But take a look at these renderings and tell me with a straight face Apple would ever release something that looks as unsexy as this. Apple’s wireless mouse, one of the company’s most mundane accessories, has a better industrial design than this hideous malformed dork machine that Motor Trend‘s crack team has cooked up. I’ve been wrong about Apple on plenty of occasions (and will be on plenty more, I’m sure), but I feel pretty confident in saying there’s no way in hell the Apple Car looks even slightly like this slab of awful (if it even exists). The Motor Trend Apple Car concept reminds me a bit of my parents’ old, gold, stodgy Mercury Villager — except that actually had a kind of effortless, so-uncool-it’s-cool charm to it. (RIP “Gold Bullet,” you will be missed!)

The author of the cover piece, Kim Reynolds, points out in a video above that the speculative car’s shape was informed more by the experience that Apple might want passengers to have while riding in it, but that still doesn’t really excuse how unappealing this thing looks.

Anyway, take a gander for yourself at Motor Trend‘s idea of the Apple Car over at its website.