A pioneer in subwoofer and LIDAR technology has now built an electronically and pneumatically controlled suspension for his boat. 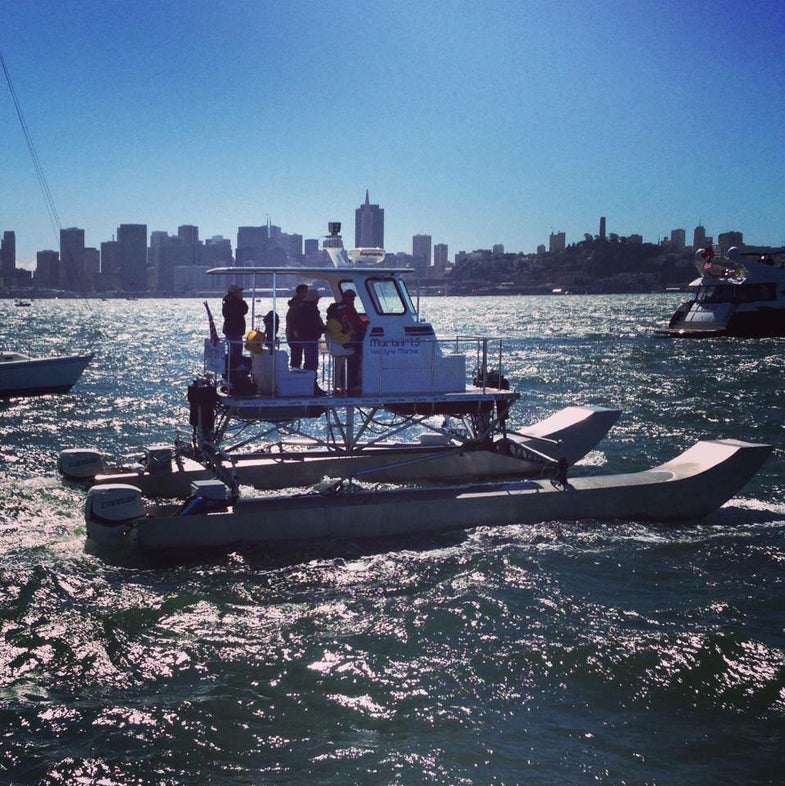 Where most people would just see four Firestone truck airbags, designer and Velodyne CEO David Hall saw a way to stabilize boats in choppy waves. To build a self-stabilizing boat called “Martini 1.5,” Hall hacked the airbags to create an elaborate suspension that keeps the deck stable. The airbags act as actuators in a pneumatic system to allow for shifts in the amount of weight on top of the deck, and also as housing for a set of 4 DC servo-motors that stabilize the deck in response to motion from the waves below. But Steven Shonk, the Martini 1.5’s lead engineer and captain, says the heavy-duty technological know-how lies not so much in the mechanical system as in the software, which must track the position of the deck in space and send real-time instructions to compensate for wave action.

“Putting it all together and writing the software is challenging,” says Shonk. “It’s an active suspension that automatically adjusts for the waves – it’s not a passive system.”

The computer “brains” of the operation lie on deck – linear accelerometers and a 3-axis gyroscope send spatial information to an off-the-shelf Altera computer chip called a field-programmable gate array (FPGA). The FPGA sends instructions to a pair of motor controllers, each of which controls a direct current servo motor built onto the tops of the 4 airbag-actuators, which are affixed to the front and back of the deck. The motors are the workhorses, constantly and continuously driving lead screws through the airbags, lifting and lowering the deck via a set of legs onto pontoons. The pontoons bounce and roll in response to the action of the waves, but the continuous movements of the lead screws push up on the deck to prevent it from following the pontoons into the trough of a wave.

In addition to the electronically controlled servo motors, there’s also a pneumatic stabilizing system for changes in pressure on the top of the deck, as people move themselves or cargo around, changing the distribution of weight onboard. A 125 psi pump feeds into an accumulator and then the airbags. So if, for example, 3 crew members, weighing a total of 500 pounds, gather at one side to pull in some crab pots, the accumulator pumps a couple of pounds of pressure beneath them to keep the surface level.

A test-ride through a San Francisco Bay roiled with chop from ferries and cargo ships suggests that Hall’s boat-hacking experiment has been a success. We cruise in the Martini 1.5 at about 30 MPH, peaking at 38. And while the wind, the noise, and the cold on the 37-foot craft don’t particularly put me in the relaxed mood where a martini would be welcome, one certainly could have an elegant drink without spilling it. The same could not be said for the conventional Velodyne chase boat that bounds and slaps along next to us through the waves. Shonk estimates that without the suspension system, he would need to pilot the craft through the moderately rough waters at about 12 MPH.

And that’s good news for people vulnerable to seasickness, a phenomenon not totally understood by doctors. The prevailing theory is that choppy motions on a boat confuse the brain, because visual data from the eyes clash with signals from the vestibular system in the inner ear, which helps control balance. Because we are sitting down and yet getting jostled unpredictably by the waves, for example, the brain interprets the confused signals as a sign that something is wrong, and reacts with waves of nausea. Whatever the cause, the discomfort and vomiting are very real – but on the Martini 1.5, even people prone to seasickness, such as Velodyne engineer Andrew White, who threw up twice after a recent jaunt in the conventional chase boat, feel fine.

The designer Hall has more than sea-sickness on his mind. Hall started Velodyne as a high-end acoustics company specializing in subwoofers, and his LIDAR systems, which use pulsed lasers to generate real-time 3-D models of the world, are now used by numerous car and truck makers, including the Google self-driving car.

Hall originally developed the idea for an active boat suspension after seeing small pleasure boats struggling with swells in the Bay. But Velodyne is also at work on larger 40 and 48 foot iterations that will have commercial applications – which Shonk expects to be available in about a year, though he declines to estimate a price. A self-stabilizing boat would be helpful as a tender to large yachts out in the open ocean. And a stabilized deck would be much safer on crew boats that support the dangerous work of loading people and cargo onto oil rigs or offshore wind farms. A third version would be customized for search-and-rescue missions. Hall and Velodyne are betting that sailors of the future will pay handsomely for more stability on the high seas, whether the ultimate goal is to quell nausea, load cargo, or just enjoy a cocktail.