Jake Loniak is a college junior; he's also the inventor of one of the most innovative concept vehicles we've seen in ages. Inside: the electric exoskeleton motorcycle and an exclusive video of the beast in action 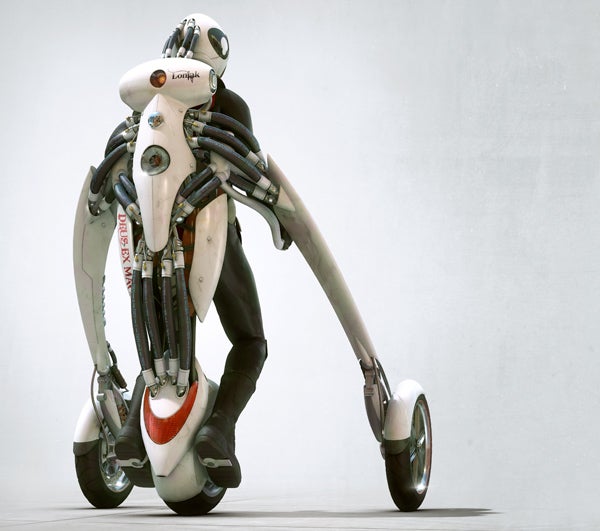 The transportation program at the Art Center College of Design has produced legendary car designers, including BMW chief of design Chris Bangle and Henrik Fisker, the creator of the Fisker Karma electric supercar. But this year, after professor Bumsuk Lim’s inaugural motorcycle-design class, the buzz is all about bikes, especially Jake Loniak’s exoskeleton motorcycle concept Deus Ex Machina. 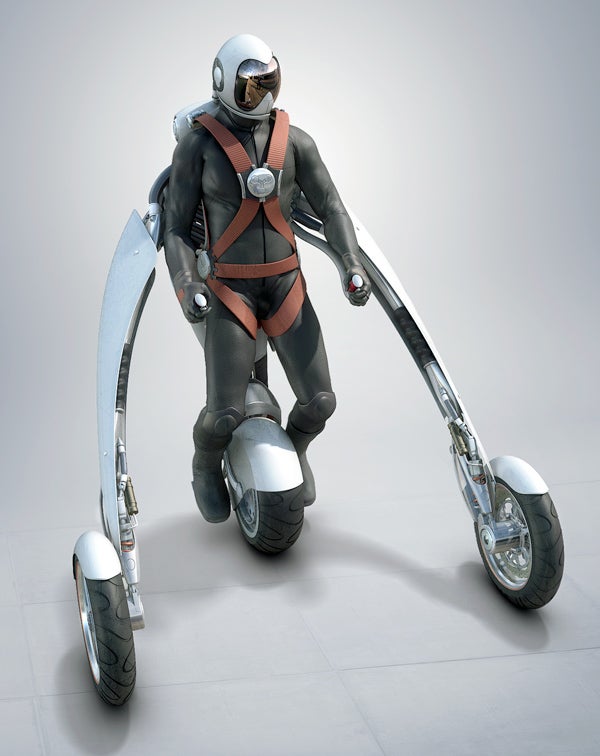 Once the bike is parked, the rider can strap it on like a suit.

Actually, to call Deus a “motorcycle” is a bit of a stretch. It would stand vertically when parked, so that the rider can step in and strap the bike on like a full-body suit. A computer would interpret the rider’s body movements, translate those into directional commands for the motorcycle, and steer the bike using 36 pneumatic muscles (artificial muscles made by the German company Festo that inflate or deflate to change the direction). “It’s like riding two skateboards at once, but stable, because the machine supports the rider’s body,” Loniak explains. These two skateboards, however, would be powered by lithium-ion batteries and ultracapacitors and capable of hitting 75 mph. “I never envisioned this as a commuter,” he says. “This is a sport bike.”

Deus exists only in a few deceptively realistic computer illustrations, but Loniak is confident that it can be built. “I believe a working prototype could be made, but it would take a great deal of time and engineering,” he says. The basic technology already exists; the Watertown, Massachusetts, start-up A123 is already selling the lithium-ion batteries Loniak wants to use, and a number of companies are developing ultracapacitors for electric cars and hybrids. “This isn’t fantasy,” he says. “It’s a green vehicle, and all of the numbers are based in the real world.”