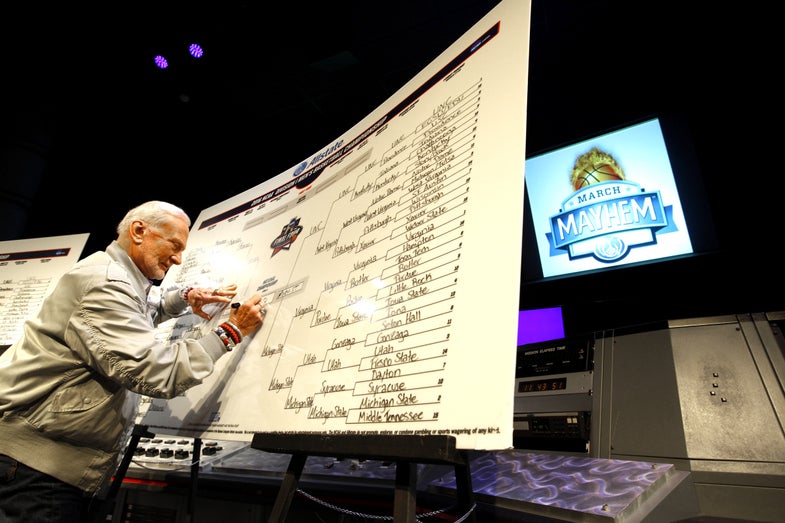 Every twelve months, there is a magical moment known as March Madness, when 68 college basketball teams compete for the chance to clip some nets and be immortalized in a Jumbotron-sized version of One Shining Moment.

Though there have been four games since Tuesday, the tournament officially begins today and continues until April 4th, so to help with any last-minute bracket suggestions, we reached out to Buzz Aldrin, the Lunar Module pilot on Apollo 11 and the second person to set foot on the Moon.

Aldrin recently participated in the Allstate March Mayhem Challenge, and while this was the first ever bracket the former astronaut has filled out, sometimes it takes that out-of-the-box thinking to get that edge in your office tourney pool.

Thanks for speaking with Popular Science about March Madness.

March Mayhem! You know there is going to be a game, or two, or three, or maybe four every night of the week. But it has been quite a while since I bounced balls up and down the court, or watched things on TV.

So how did you pick your bracket?

Predicting who is going to have a better team—it is a lot more into the coaching and the history of the players, and how they played in recent games. It is a real art. I think Dick Vitale [ESPN analyst and Aldrin’s partner in the challenge] has been doing this for a long time, so I need all the help I can get. I do have a predictor [algorithm], and I haven’t found any reasonable discrepancies in that.

Did you do any background research, and watch some of the 68 teams?

Well, I am kind of interested in who is going to end up in the White House, so that is taking a little bit of my time. I also need to work on organizing the Buzz Aldrin Space Institute here at Florida Tech.

You had a lot on your plate, then.

Well, that’s why I used the predictor that Dick put together. It came up with quite similar results [to Vitale’s picks in the first two rounds]. I had no strong reason to argue with any of that. When we moved on to the Sweet 16, the results were a bit different. I had a more favorable opinion of North Carolina [in the East Region], so they eliminated Kentucky, and they got into the Final Four. But Kansas went pretty much all the way, and so did Oklahoma. Michigan State, too.

That’s a pretty strong Final Four. You have the same line of thinking as much of America.

I wasn’t left speechless up there to come up with my own inventiveness. There were a few clues here and there.

Why are you so keen on North Carolina? Because of Marcus Paige or Brice Johnson?

I have been [to Chapel Hill], and my choice had nothing to do with basketball. They have a good planetarium, and we looked at spherical things in the sky, so we could identify them, and a basketball is a spherical event, so I guess it is some kind of connection between Morehead Planetarium and the University of North Carolina.

We looked at spherical things in the sky, and a basketball is a spherical event.

Outside of UNC, how did you choose the rest of the Final Four?

When we still didn’t have any firm decision, there is a deck of cards. Some are black, and some are red, and black indicated one team wins, and red the others, and it was even chances all around. And that’s how we got the Final Four, and that’s how we got the championship. Maybe I’ll get to Houston [the site of the title game] to watch that. They had the Super Bowl game coming up next February.

Yeah, Houston is turning into the nation’s sports title capital.

Well, they don’t make rockets there anymore, or not ones that get scheduled to fly.

You think Michigan State will win it all—did Dick share your opinion?

We both agreed on that. They are a pretty outstanding team. I’ve been watching little bits of ESPN, and there is Michigan State up there scoring the win again. They are pretty consistent.

What about sleepers? Are there any other teams that you think could help others score those coveted March upsets?

I had a good friend who played basketball for Indiana, so I might want to see what they are doing. He dated my sister for a while, he was a year ahead of me at West Point.

I’ve been doing some work lately with the engineering people at Purdue, so there is some favoritism there. I am from New Jersey, and Seton Hall [is good]…I don’t know that there is any other basketball team from the state. I don’t think Rutgers made the cut.