And he's played harmonica with Coldplay? 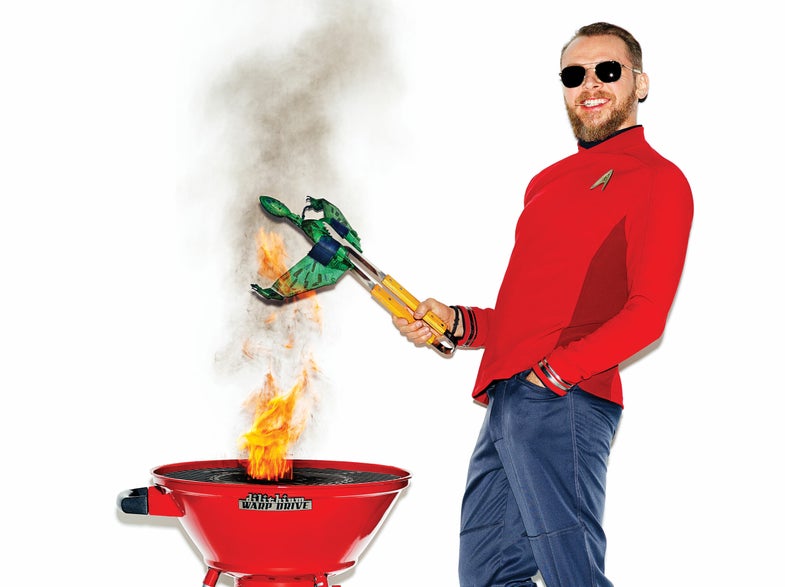 This summer, the crew of the Enterprise find themselves in yet another interstellar pickle.

Who will hit the warp drive on the funny? Our cover lad, Simon Pegg, of course. The England-born actor returns as chief engineer Montgomery “Scotty” Scott in this year’s franchise reboot, Star Trek Beyond. And it happens to coincide with the 50th anniversary of Gene Roddenberry’s iconic (and campy) TV show.

Yeah, Pegg has heard all the “Beam me up, Scotty” catcalls he can take. Even his mother won’t stop. Still, the man is a comedian. He’s also (per his Twitter bio) a zombie killer, supercop, alien buster, diesel weasel, and onetime owner of the Millennium Falcon. So we figured the twisted mind that brought us Shaun of the Dead, broke Ethan Hunt out of a Russian prison (as Benji in Mission: Impossible), slipped on a fat suit to play Unkar Plutt in last year’s Star Wars, and co-wrote this year’s Star Trek would be the best spokesperson for our Insane Ideas issue. Just how does this intergalactic polymath do it?

By giving her all she’s got, Captain!

PS: Do any of those buttons on the Enterprise set do anything?

SP: One calls for pizza, but we’re not sure which one it is. Occasionally pizzas just turn up and we know that someone’s pressed it, but it isn’t clear. They actually all work. If you press things, they light up. But nothing causes the spaceship to fly.

PS: Does it feel as realistic as it looks to us fanboys and fangirls?

SP: The sheer attention to detail on the set design is extraordinary. All the controls on the Enterprise are touchscreen sensitive, and every button has a function. And there’s a way to steer the ship with various joysticks and dials. You might never see a close-up of that in the film, but as an actor, it makes you feel like you’re in a totally real environment.

PS: I suppose that makes it easier to pretend you’re on a starship.

SP: These sets are so fully realized, and it was a fairly monumental shoot, this one. For the first time, the bridge was built on a gimbal so that it shook and we didn’t have to pretend the ship was being rocked around, which is one of the most beloved Star Trek traditions: The camera shakes and the actors go LEFT! and RIGHT! There was a faint ennui about it: “Oh, we don’t have to pretend anymore?”

SP: My Scotty watch. I’ve worn it in every film, but I don’t think anyone’s seen it. If you press it, it goes all blue and flashy. I like to press it sometimes when I’m bored. I’ve tried to put it in the shot, but it never got in. So it’s an unseen, beautiful thing.

PS: Star Trek has been around for half a century. What’s changed since it began?

SP: What’s kept the series going is this idea of hope—the idea that we actually manage to not only live on, but we work together and go out into the universe and we explore. In this one, we tried to slightly question the strengths of Roddenberry’s original vision. If the villain is opposed to what the Federation is all about, we wanted to make the audience wonder if the villain is right and the crew is just assimilating the universe, rather than their Federalist ideal to go out, make alliances, and build a huge community. We wanted to take stock of that and ask: “Is that the right thing to do? Or are you just colonizing the galaxy?”

PS: I hear you’re a musician.

SP: I play the drums a little bit. And then lately I have played harmonica with Coldplay a few times, and that’s always been extraordinary because for a few minutes, without any qualifications or any work to get there, I’m standing in front of 80,000 people playing harmonica!

PS: How did you get that gig?

SP: Chris [Martin] and I go back a long way. We became friends when they were a shoegazing indie band that nobody’d ever heard of. They did a gig in 2001 at a festival, and they weren’t even on the main stage, but I got up and played harmonica with them. And every now and then I’ll go to see them, and Chris will be like, “Come on up and play!” and I’ll go, “I don’t want to; I just want to enjoy the show and not feel nervous!” But he says, “You gotta!” So I end up sh*tting myself for the entire show until I do my bit, and then I feel like a rock star for the rest of the night.

PS: Does the Star Trek entourage ever hang out in real life?

SP: We’ve all known each other for a long time, and we get on very, very well. In Vancouver, where we shot this one, you’d often walk into a nightclub or a restaurant and see the entire crew of the Enterprise. We went into one club and sat at this big horseshoe table—me, Chris [Pine], Zach [Quinto], John [Cho], Anton [Yelchin]*, and Deep [Roy]—and on the screen above this table, they put Star Trek on, and we were like: “What the hell, man?! We don’t really want to say, ‘Hey, we’re here!'”

PS: Do you think Scotty’s a little jealous of the Kirk-and-Spock bromance?

SP: I don’t think he cares. I kind of feel like he lives in his own world, Scotty. I think he likes being in the guts of the ship fixing stuff. And obviously in this iteration, he’s got his little pal, Keenser, who’s like this little oyster or bivalve creature. Now he’s a regular fixture as Scotty’s right-hand man…or right-hand bivalve. So he’s fine.

PS: Did you meet your predecessor, James Doohan, before he passed away in 2005?

SP: Weirdly, I met him at an SFX [Science Fiction Expo] convention years before. He was guest of honor. It was very much the end—he was in a wheelchair and he was very frail, but I got to meet him. It always strikes me as so strange that that was in my future, and I didn’t know and would not be able to tell him. So I consider that to be an extraordinary, fortuitous thing that I got to meet him, even though it was a good three years before I’d play him. I was like, “Wow, that’s the universe opening up.”

This article was originally published in the July/August 2016 issue of Popular Science. Check out some insane ideas that just might save the world.