How we finally figured out the color of dinosaur feathers

Excerpt: The Evolution of Beauty The following is an excerpt from The Evolution of Beauty: How Darwin’s Forgotten Theory of Mate Choice Shapes the Animal World—and Us by Richard O. Prum.

One day in 2007, the Yale paleontology professor Derek Briggs and his graduate student Jakob Vinther walked into my office in New Haven. They wanted to show me a picture that Jakob had taken—a scanning electron microscope image of a feather at twenty thousand times magnification. The grayscale image showed dozens of tiny, sausage-shaped objects lying roughly parallel to one another. “What do these look like to you?” they asked. “Those look like melanosomes,” I responded. “I told you so!” Jakob exclaimed triumphantly to Derek. Apparently, something important was at stake here.

Melanosomes are the microscopic packages of melanin pigments that give feathers their black, gray, or brown coloration. What Jakob and Derek hadn’t told me at first was that the electron microscope image was taken from the feather of a fossil bird from the Early Eocene Fur Formation in Denmark. If these were melanosomes, they were about fifty-five million years old.

The melanin pigments in bird feathers are synthesized by special melanin-producing pigment cells and packed into tiny membrane-bound organelles, which are called melanosomes. Similar to the pigmentation of human hair, in birds the melanin pigment cells transfer completed melanosomes into individual feather cells during feather development. As the feather cells mature, the melanosomes are walled into the hard beta-keratin protein of the feather to produce the color of the mature feather. Melanins are ancient pigments and are produced by almost all animals. Melanins are also diverse in chemical structure. For example, the plumage colors of a black American Crow (Corvus brachyrhynchos) and the color of human black hair are made by eumelanin molecules. The rufous brown plumage color of a Wood Thrush (Hylocichla mustelina) and the color of human red hair are made by the distinctive molecule pheomelanin.

Paleontologists had been examining fossil feathers with scanning electronic microscopes since the early 1980s. They had observed these cylindrical objects and even confirmed that they were made of carbon-containing organic molecules unlike the surrounding rock. However, paleontologists are mostly bone people, and they have not traditionally thought a lot about cell biology. So, based on the shape and size of these objects, they concluded that these structures were fossil bacteria that had consumed the feather during its fossilization. Because paleontologists are keenly interested in the specific mechanisms by which different fossils are preserved, this was treated like an important discovery. However, the hypothesis never made a lot of sense. For example, why were bacteria more commonly preserved while eating the dry, nearly indigestible feathers and never found consuming all the juicy, appetizing bits of the decomposing body? In any case, the bacterial hypothesis became an accepted fact in paleontology. Jakob’s discovery presented an exciting opportunity to challenge this dogma.

To test whether these microscopic fossil structures were indeed bacteria or melanosomes, we needed an indisputable example of a fossil feather with a melanin pigment pattern preserved. Luckily, Derek Briggs has an encyclopedic knowledge of extraordinarily well-preserved fossils from the museums of the world, and he remembered a gorgeous horizontally striped fossil feather from the Crato Formation of Brazil, approximately 108 million years old, in the geology museum of the University of Leicester. The fossil preserved amazing details of feather structure, including the finest filaments of the feather barbules. Furthermore, the striped color pattern on the feather exhibited distinct characteristics of the natural pigment patterns of feathers and could not be confused with fossil bacteria.

With an electron microscope, we confirmed that the black stripes on the feather contained abundant tiny “sausages” a few microns long and about one hundred to two hundred nanometers wide, which strongly resemble the eumelanosomes from the feathers of living birds. In contrast, the white stripes on the fossil feather were entirely devoid of any such structures at all. Clearly, the best explanation is that the microscopic structures are preserved melanosomes from the original feather itself. Somehow, under the right conditions, melanosomes fossilize beautifully and can endure for hundreds of millions of years, preserving aspects of the original color pattern of these ancient animals.

Our discovery of fossilized melanosomes has inspired an entirely new generation of research on the coloration of fossil vertebrates, including their feathers, hair, skin, scales, nails, and even retinas. Of course, the most exciting possible question in this new field of color paleontology was, what colors were the dinosaurs? Following our discovery, this question was no longer the stuff of science fiction but actually an entirely plausible question to investigate. Feathers first evolved in a lineage of meat-eating, bipedal theropod dinosaurs before the origin of birds or the origin of flight. We had shown, in principle, that we could reconstruct the melanin coloration of the plumages of the non-avian dinosaurs. Indeed, the striped Brazilian feather fossil is old enough that it might have been from the plumage of a non-avian dinosaur! All we would need were tiny samples of dinosaur feather fossils for electron microscopy. The feathered dinosaurs, which come mostly from early Cretaceous and late Jurassic deposits in Liaoning, northeastern China, are among the most exciting and revolutionary paleontological discoveries of the last century. But reconstructing their plumage coloration would take the excitement to a whole new level! 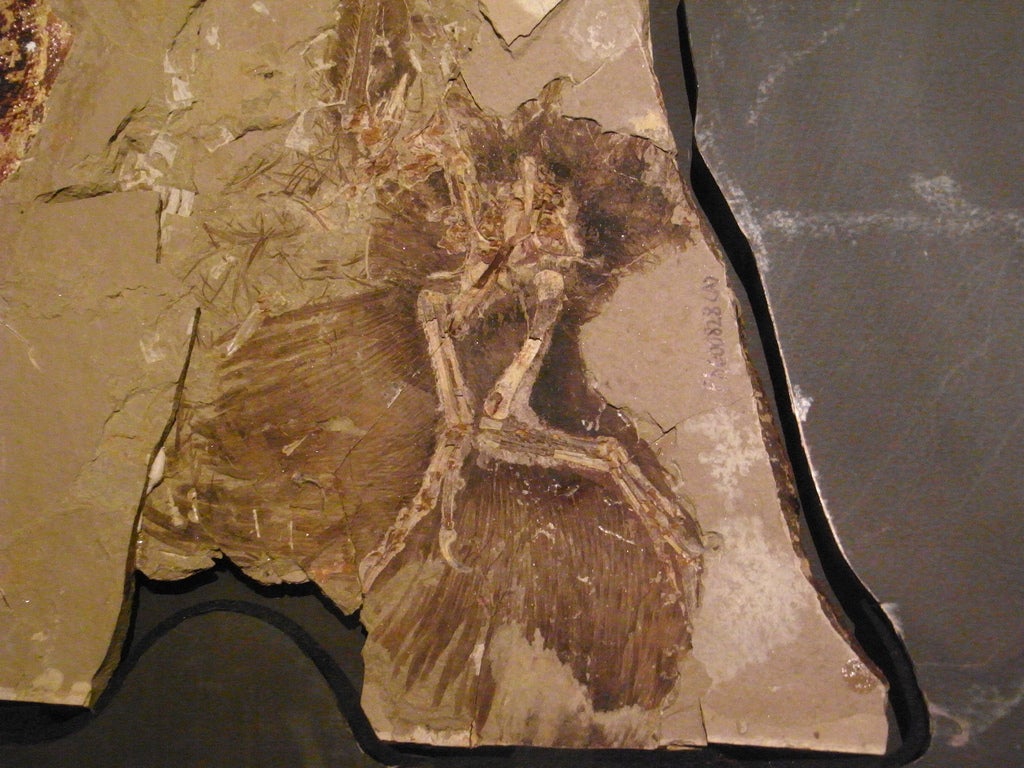 With an expanded team of collaborators, in the following year we started research on a late Jurassic specimen of the raptorlike dinosaur Anchiornis huxleyi from the Liaoning Formation in northeastern China at the Beijing Museum of Natural History. Anchiornis was a small bipedal theropod with a long bony tail, tiny teeth, and long, winglike feathers on both its forelimbs and its hind limbs. Anchiornis is one of those enigmatic “fourwinged” dinosaurs, which are closely related to the raptor dinosaurs (like Velociraptor, who chased the kids around the kitchen in the movie Jurassic Park), to Archaeopteryx lithographica, the earliest bird fossil, and to the ancestor of all living birds.

Although the Liaoning Formation is known for its exquisite preservation, this particular specimen of Anchiornis did not look very promising. Actually, it looked like Jurassic roadkill—all mangled, head removed and preserved on another slab, and limbs splayed out in all directions—but it did have a thick mat of dark feathers surrounding its bones. We ended up taking very tiny, mustard-seed-sized samples from three dozen locations around the body for electron microscopy. Given the poor appearance of the specimen, we were just hoping to find any melanosomes at all.

Back in New Haven, electron microscopy of the different samples revealed that some had well-preserved melanosomes, others preserved impressions of melanosomes, and some areas had no preserved melanosomes at all. Our next innovation was to compare the size, shape, and density of the melanosomes from the Anchiornis fossil with those of living birds. It turns out that eumelanosomes from black and gray feathers tend to be long and sausage shaped, whereas pheomelanosomes from rufous or red-brown feathers are more rounded and jelly bean shaped. By comparing measurements from Anchiornis melanosomes with those of living birds, we could diagnose the color of the fossil feathers. Because we had sampled many places from all across the specimen, we could reconstruct the color of nearly its entire plumage.

One of the most exciting moments in my scientific career was watching the plumage of Anchiornis come to life as I mapped the newly diagnosed colors—black, gray, rufous brown, and plain white—from the sample numbers back onto their anatomical positions in the animal’s plumage. The resulting picture was more stunning than we could ever have imagined!

Describing the plumage coloration of Anchiornis huxleyi was like writing the very first entry in the Field Guide to Jurassic Dinosaurs. As a child, I had been inspired by field guides to go out into the world and study birds. Now, as a scientist, I had the opportunity to reimagine them in an entirely new way.

What did Anchiornis huxleyi look like? Its body plumage was largely dark gray with black on the forewings (color plate 15). The long crest feathers on the top of the head were rufous brown. Most striking of all, the long feathers on both its forelimbs and its hind limbs were white with black tips, or spangles—like the modern breed of Spangled Hamburg chicken. The effect of these black spangled limb feathers was to boldly highlight the trailing edge of the feather and to produce a series of black bars on the wings.

Interestingly, the long limb feathers on Anchiornis were not asymmetrical in shape, like modern avian flight feathers. So, it is not clear that this creature used its limbs as gliding “wings” at all. Furthermore, Anchiornis was heavily feathered all the way down to its toes and lacked the scaly legs and toes of most living birds.

Discovering the color of a dinosaur is more than just fun; it raises a host of fundamentally new questions about dinosaur biology and about the origins of what we think of as bird biology. The bold and complex plumage pigment patterns of Anchiornis were obviously used as sexual or social signals. Thus, the evolution of aesthetic plumage ornaments originated not within birds but way back in terrestrial theropod dinosaurs. The dinosaurs coevolved to be beautiful—beautiful to dinosaurs themselves—long before one exceptional lineage of dinosaurs evolved to become flying birds. The rich aesthetic history of the birds goes all the way back to their theropod roots in the Jurassic age.

Excerpted from The Evolution of Beauty: How Darwin’s Forgotten Theory of Mate Choice Shapes the Animal World—and Us by Richard O. Prum, with permission of the publisher. All rights reserved.