To save their land, they unveiled the world’s biggest dinosaur footprint 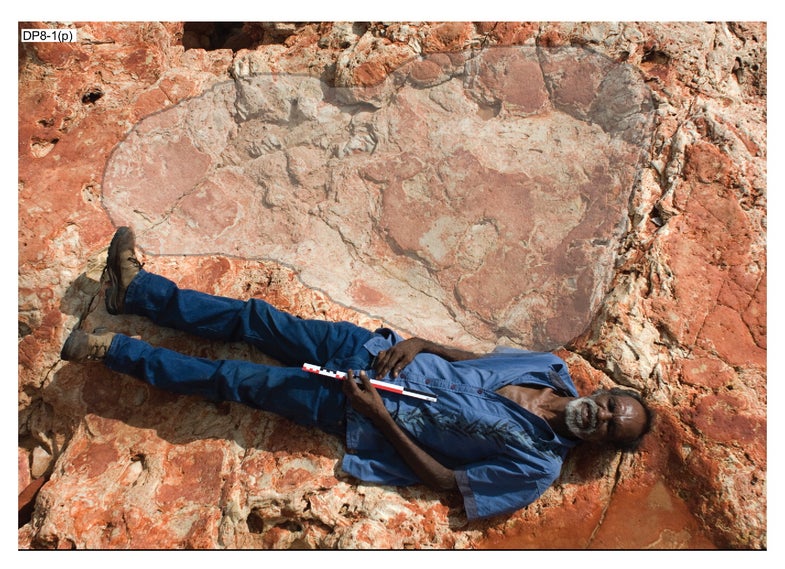 Richard Hunter, one of the Goolarabooloo men who helped the paleontologists with their discovery, holding a 40cm (15.7in) scale bar next to the giant sauropod footprint. Damian Kelly/University of Queensland/EPA
SHARE

The Goolarabooloo people have been singing about dinosaur footprints for thousands of years—they just don’t call them ‘dinosaurs.’

To the indigenous tribe, those tracks were left by ancient, spiritual beings who walked those lands during the Creation Time. The men tasked with maintaining the laws and rituals for the Goolarabooloo people have passed down lyrical stories about the footprints. These so-called ‘song cycles’ detail the paths that their supernatural predecessors took, as demarcated by the enormous tracks they left behind. So they’ve known for thousands of years that these footprints existed, they just weren’t about to open up their homelands to a bunch of outsiders.

That is, until 2008 when the Australian government wanted to build a gas processing plant in the Walmadany area, where most of the dino prints are located. The Goolarabooloo wanted to protect their lands and they knew they might have a bargaining chip up their sleeves. If the prints that their folklore was based on were valuable to paleontologists, then maybe the land would be protected. And they were right.

Our monograph on the dinosaurian tracks of Walmadany is now out as the 2016 SVP Memoir. Photo: Damian Kelly https://t.co/B3NAlwBreD/ pic.twitter.com/89hHSWidc4

Leaders from the group reached out to Steven Salisbury, a paleontologist at the University of Queensland in Australia, hoping that he could investigate the tracks. And investigate he did. Salisbury and his colleagues found 21 different types of fossil prints embedded in the sandstone in Walmadany, making it perhaps the most diverse region of dinosaur footprints in the world. The site confirms that the stegosaurus once roamed Australian lands and includes a five-foot-nine-inch long footprint from a sauropod, the largest footprint ever found. Salisbury and his colleagues finally published five years’ worth of research in the Journal of Vertebrate Paleontology on Friday.

The Walmadany region is especially significant for Australian paleontology because there are so few prehistoric fossils in the area. Low, flat plains aren’t ideal for finding fossils. You need areas of rock that are in the process of being unearthed by geological activity, such that you can see the fossils before they’re destroyed by total exposure.

Even these tracks were only visible at low tide, forcing the researchers to brave sharks and crocodiles to reach them. Welcome to Australia.

Fortunately, the land has now been designated a National Heritage site and the gas plant plan fell through, so paleontologists can keep investigating the thousands of tracks in the area. And since they’re significantly older than the fossils found elsewhere in Australia—which are a mere 90 to 115 million years old—these prints could hold clues to more ancient history.