As mountains grow, they drive the evolution of new species

A long-standing hypothesis gets hard data 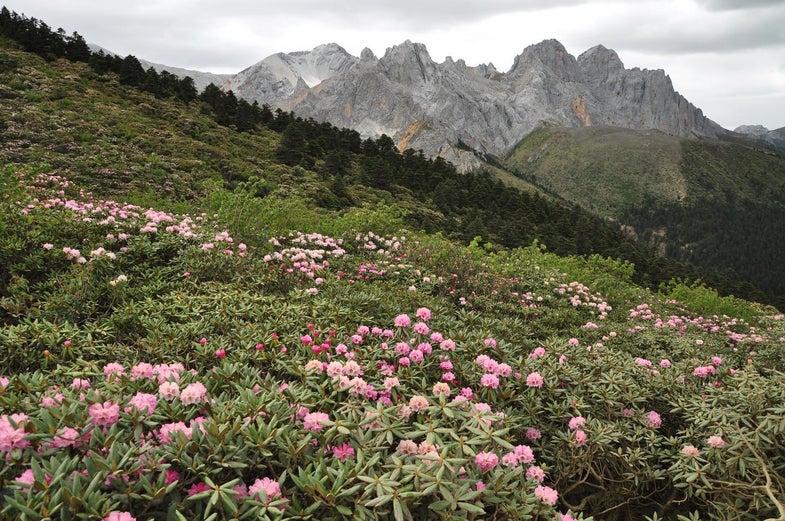 Mountains aren’t just beautiful: these locales also tend to host some of the richest diversity of species on the planet. We’ve known this for a long time—ever since Alexander von Humboldt, the Prussian geographer and naturalist, first climbed up the Andes in the 18th century. But nobody has really figured out why.

One popular hypothesis goes like this: the reason why mountains have so many different species is that, as mountains are uplifted by colliding tectonic plates, the process creates more environments, and therefore more opportunities for new species to adapt to them. However, this hypothesis never had any explicit quantitative testing until now, according to a recent study published in the Proceedings of the National Academy of Sciences.

Many other studies have looked at the diversity of one single plant group or another, and results seemed to support the popular hypothesis. “That claim is often made. The hypothesis often incorporates the narratives of these studies, but it’s never been explicitly tested” across time and space, through quantitative comparison, says study co-author Richard Ree, Associate Curator of Botany at Chicago’s Field Museum.

Ree and colleagues found that as China’s Hengduan mountains formed eight million years ago, the rate of diversification there was more than twice as fast as that found in the Himalayas—which are quite close by, but much older—during the same stretch of time.

The Hengduan Mountains are pretty young, geologically speaking—the Himalayas are more than twice as old, having formed around 20 million years ago. But the spot is bursting with biodiversity: the younger mountains play host to more than one third of the 30,000 species of vascular plants (basically everything except mosses) found across China, says Ree.

Colin Hughes, an assistant professor at the Department of Systematic and Evolutionary Botany at the University of Zurich who was not involved in the study, says the researchers “have made a significant step forward.”

“We’ve known that part of the world is very diverse since the 19th century,” Hughes says. “But nobody understood the evolutionary history of this hotspot in any general way until now, so this is a landmark study.”

To test the hypothesis that uplifting of the mountains brings up more species at a faster rate, Ree and his colleague Yaowu Xing compared the evolutionary histories of 19 groups of plants in the Hengduan Mountains, the Himalayas, and the connected Qinghai-Tibetan plateau.

“The fact that these mountains have different ages and they are right next to each other gives us a natural experiment,” says Ree.

Using evolutionary trees generated from DNA sequences and ancient fossil data, Ree and Wu were able to confirm that the tremendous tectonic uplift of the Hengduan mountains over the last eight million years indeed coincided with a rapid diversification.

That pattern revealed itself only as the researchers considered all 19 plant groups as a whole. “People [in the field] tend to focus on one group of a plant at a time and tell their story,” says Ree. “In this case, you wouldn’t necessarily see the bigger picture [in that way], because each individual group doesn’t have the statistical power of the signal to tell you this pattern.”

Ree thinks the next step is to study the results of uplift that may have more direct effects on evolution. Diversification might be more likely to occur in certain habitats or elevations, for example. Hughes thinks that future studies could separate the plants by their habitats, like Himalayan blue poppies in high elevation alpine zones and conifers and maples in lower elevation forest zones, to see how diversity might vary in different zones. “I think it’s likely that the diversification history of those different habitats might be different,” he says.

And just as Hengduan’s diversity was assessed by comparing it to the Himalayas, this new data might provide insight into the evolution of another mountain’s species. Mountains are often so isolated from the lowland around them that they’re referred to as “sky islands,” says Hughes. This isolation makes comparative study of one mountain to the next intriguing, as subtle variables may make one drastically different from another in the same region.

“Those of us who study the diversity of life are interested ultimately in explaining the origin of every species,” says Ree. “Across the world, some places have a lot of species, some have fewer species, so a basic question is: why is it the case? How is there this disparity of species richness?”

“If we ever hope to have any kind of basic understanding of life,” says Ree, that’s something we need to figure out. And mountains may be the perfect laboratory.