Excerpt: Astrophysics for People in a Hurry 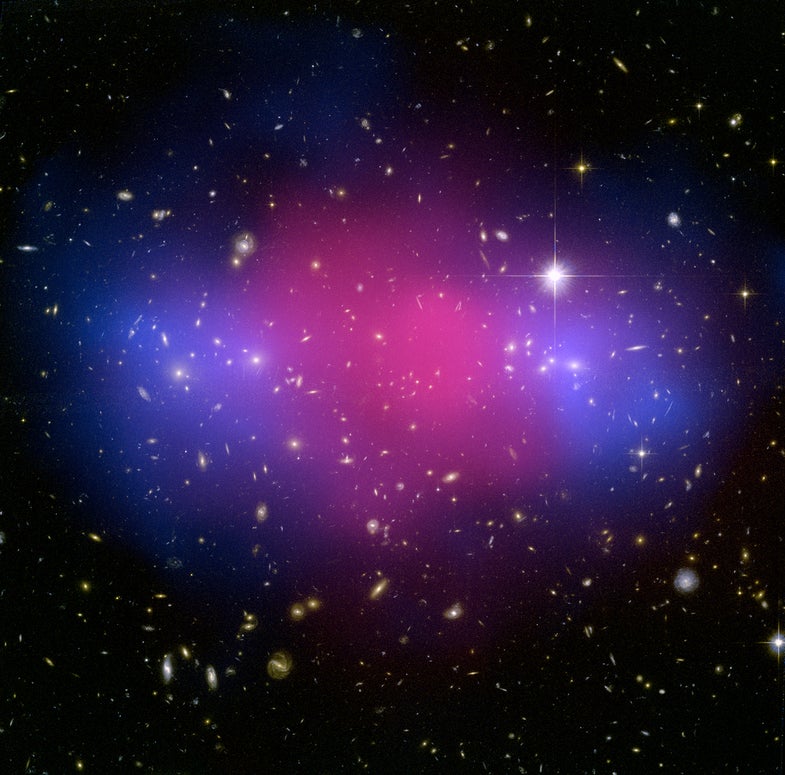 The collision of star clusters, seen here, help provide insights into dark matter, one of the more mysterious aspects of our universe. NASA
SHARE

So dark matter is our frenemy. We have no clue what it is. It’s kind of annoying. But we desperately need it in our calculations to arrive at an accurate description of the universe. Scientists are generally uncomfortable whenever we must base our calculations on concepts we don’t understand, but we’ll do it if we have to. And dark matter is not our first rodeo. In the nineteenth century, for example, scientists measured the energy output of our Sun and showed its effect on our seasons and climate, long before anyone knew that thermonuclear fusion is responsible for that energy. At the time, the best ideas included the retrospectively laughable suggestion that the Sun was a burning lump of coal. Also in the nineteenth century, we observed stars, obtained their spectra, and classified them long before the twentieth-century introduction of quantum physics, which gives us our understanding of how and why these spectra look the way they do.

Unrelenting skeptics might compare the dark matter of today to the hypothetical, now-defunct “aether” proposed in the nineteenth century as the weightless, transparent medium permeating the vacuum of space through which light moved. Until a famous 1887 experiment in Cleveland showed otherwise, performed by Albert Michelson and Edward Morley at Case Western Reserve University, scientists asserted that the aether must exist, even though not a shred of evidence supported this presumption. As a wave, light was thought to require a medium through which to propagate its energy, much as sound requires air or some other substance to transmit its waves. But light turns out to be quite happy traveling through the vacuum of space, devoid of any medium to carry it. Unlike sound waves, which consist of air vibrations, light waves were found to be self-propagating packets of energy requiring no assistance at all.

Dark-matter ignorance differs fundamentally from aether ignorance. The aether was a placeholder for our incomplete understanding, whereas the existence of dark matter derives not from mere presumption but from the observed effects of its gravity on visible matter. We’re not inventing dark matter out of thin space; instead, we deduce its existence from observational facts. Dark matter is just as real as the many exoplanets discovered in orbit around stars other than the Sun, discovered solely through their gravitational influence on their host stars and not from direct measurement of their light.

The worst that can happen is we discover that dark matter does not consist of matter at all, but of something else. Could we be seeing the effects of forces from another dimension? Are we feeling the ordinary gravity of ordinary matter crossing the membrane of a phantom universe adjacent to ours? If so, this could be just one of an in nite assortment of uni- verses that comprise the multiverse. Sounds exotic and unbelievable. But is it any more crazy than the first suggestions that Earth orbits the Sun? That the Sun is one of a hundred billion stars in the Milky Way? Or that the Milky Way is but one of a hundred billion galaxies in the universe?

Even if any of these fantastical accounts prove true, none of it would change the successful invocation of dark matter’s gravity in the equations that we use to understand the formation and evolution of the universe.

Other unrelenting skeptics might declare that “seeing is believing”—an approach to life that works well in many endeavors, including mechanical engineering, fishing, and perhaps dating. It’s also good, apparently, for residents of Missouri. But it doesn’t make for good science. Science is not just about seeing, it’s about measuring, preferably with something that’s not your own eyes, which are inextricably conjoined with the baggage of your brain. That baggage is more often than not a satchel of preconceived ideas, post-conceived notions, and outright bias.