Plus, the future of bionic limbs 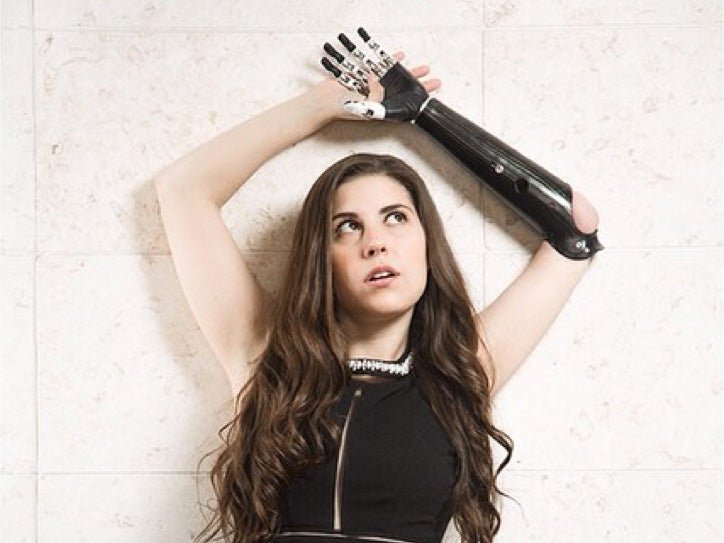 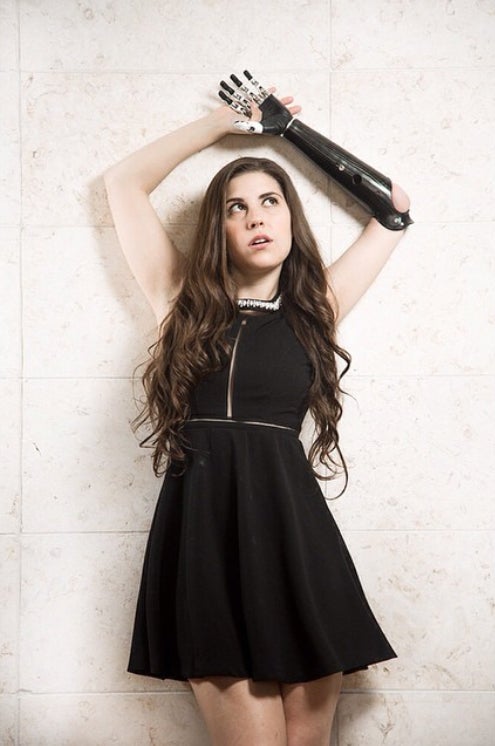 Actress Angel Giuffria can be seen in the upcoming film The Accountant.

Hunger Games actress and self-proclaimed “cyborg,” Angel Giuffria, just upgraded to one of the most advanced prosthetic arms on the market.

The bebionic3 is 30 percent smaller than typical prosthetics and has a ton of new grip patterns that Giuffria can cycle through. The prosthetic’s electrodes pick up on the muscle impulses in her residual limb so that it knows when she wants to crack an egg or point her finger, for example. All she has to do is flex the right muscles.

This interview has been edited for clarity.

Popular Science: What has your experience been like using your new bionic arm?

Angel Giuffria: It’s been awesome since I’ve had it. I was born without my arm and I’m actually considered the youngest in the world to wear a myoelectric [muscle-controlled prosthetic], which is the first generation bionic arm. I got my first arm at four months, 10 days old, so I’ve actually had the experience of growing up with different technologies of the prosthetic and bionic arms.

PS: Is there a learning curve to picking it up?

AG: It’s different for everybody. I’ve had to practice for a while to be able to crack an egg, to not crush a cup, to pick up a dime, so the learning curve comes into play when you’re actually functioning with objects.

PS: I saw the Vine Video you had of picking up a key, and that was great.

AG: It’s actually funny because that video was to help me get cast in a film. I got cast in a Ben Affleck film that’s coming out in January and it involved prosthetics. That was my little take that I had to do to send to the director to see if they wanted to use me, and I pulled it off! [laughs]. The name of the film is called The Accountant. I can’t really tell you what I’m doing in the film, but it was a lot of fun. I actually got to do a scene opposite John Lithgow, which was really cool. He’s an amazing actor.

PS: Where do you see the future bionics going?

AG: It’s exciting and it’s scary. There are so many options for things that we want done, and I say “we,” because we just had this whole discussion at Geek Picnic with all of us that got together. Those that had bebionics and Myos and i-limbs—so all the different versions—and saying what we wanted to see in the future from things like flexion and extension wrists. Right now the only thing commercially available is a rotation wrist, which rotates 360 degrees, which can be helpful, but is more so just a really cool party trick.

Muscle innovation and stuff like that is something that is being tested pretty heavily right now, implantable electrodes are something that seems like the future. But one of the main things that is picking up traction and hopefully will develop further is 3D printing. The main issue with a lot of prosthetics right now is that they are very, very expensive and a lot of people can’t afford them.

PS: Do you think in the future, if given the choice, someone would choose to have their actual limb 3D printed or opt for a 3D printed bionic limb?

AG: I definitely think there will be people that will want the limb 3D printed or want the limb recreated, but I also think there’s a group of people that like their differences. I never lost a hand—I never had a hand—and I like that I’m different. It’s awesome, so I kind of want to continue to play on that. I love my prosthetics, I love my bionic arm, I like being referred to as a cyborg, I think it’s so much fun and I don’t think I would ever sacrifice the idea of playing up the differences. So I think I’m always going to want some cool technology—you know, a cybernetic arm—rather than going for, you know, the boring fleshy arm [laughs]

PS: What about the bionics that you can feel through?

AG: The idea of that is really awesome, because right now with the technology that we have, when I want to crack an egg I have to be very careful. I know how hard I’m pinching, because I’ve pinched that hard before, so it’s kind of like a memory thing. A lot of people when they go to grab a cup with their prosthetic they watch to see how far they can crush it before its going to break, like a Styrofoam cup. So being able to feel pressure and to know without having to look at it and without having to do all of that practice is going to be amazing.

PS: Do you feel like being an amputee has been a hindrance at all in you being an actress, and do you think bionics has started to change that?

AG: It’s funny because I used to feel like that. I always had an idea in my head that when I went to auditions I needed to wear a cosmetic prosthetic that has zero function, it just looks real. So I would wear long sleeve shirts. I would cover where it meets my arm and would try to audition as a two-handed person, and that would always kind of backfire.

When it comes to Hollywood and big budget movies, they have a specific vision in their heads. So at first I always thought it was a hindrance, but since I got this arm I kind of decided that I was going to embrace it. The other hand I had before this it was not as much fun to wear, and this one is fun to wear. I’ve actually gotten great responses, and because of that I booked The Accountant and I’ve been contacted to audition for several other things. I just feel like my arm is actually opening doors where I was concerned were closed to me before.

PS: Is there anything else you would like to add about the future of bionics or bionics in general?

AG: I think the future is really bright with all of the studies that they have going on right now. There are so many exciting things going on all at once that I just can’t wait for everything to get out.

PS: I think it’s great, all of it, and not just because I’m a nerd.

Giuffria: [laughs] Yeah, it’s been the coolest thing for me to have people refer to me as a cyborg. It’s just really exciting for people to be excited about technology.