Planetary destruction on the cheap 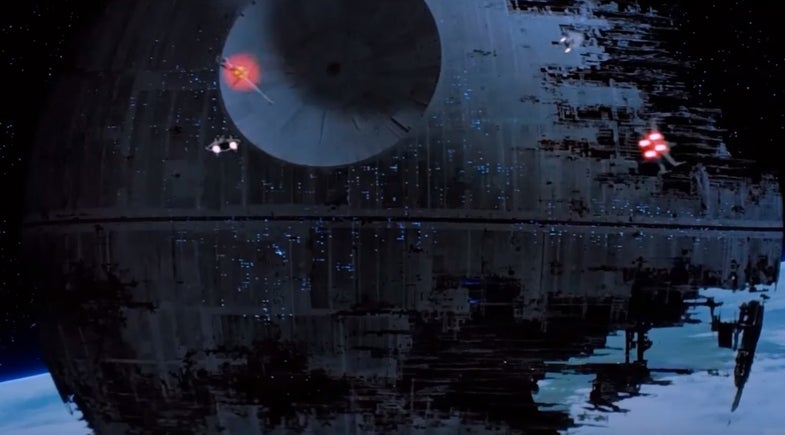 Death Stars are expensive. The fictional weapon, which defined evil in the original Star Wars trilogy, is so deadly and so massive that it’s perplexed humans on Earth, who have done everything from calculate its cost ($193 quintillion) to debate the economic impact of its destruction. Surely, absolutely no one is thinking, there must be a cheaper way to build a planet-destroying laser into a space station.

There is. Brian Muirhead, chief engineer at NASA’s Jet Propulsion Laboratory, told Wired he would recommend building it out of materials that are already in space, like asteroids, because launching stuff from Earth can be really expensive.

At Popular Science, we did some rough math to figure out how much of the total $193 quintillion cost of the Death Star was attributable to launches, assuming the costs are similar to those on Earth. The parts for the International Space Station were brought into space on 34 space shuttle flights, each with a cost of $450 million. That’s a total delivery cost of $15.3 billion, out of a total station cost of roughly $100 billion. Assuming space launches account for a similar proportion of the total cost to build a Death Star, then cutting out launch costs could save the Empire $29.5 quintillion.

Freed from the literally astronomical costs of launching into orbit, asteroid mining could be a cheap way to gather material for space structures, from a gargantuan Death Star to a merely gigantic Star Destroyer, or maybe even something that isn’t designed to blow up heavenly bodies.

In the video below, Muirhead discusses NASA’s idea to tug an asteroid into orbit around the moon, but there are other possibilities for would-be space lords. Last month, President Obama signed a law that authorizes asteroid mining. This law theoretically operates under existing space law as defined by the Outer Space Treaty (a totally really thing), and makes way for the potential future of actually mining asteroids.