This solar-powered British drone will surveil from the stratosphere 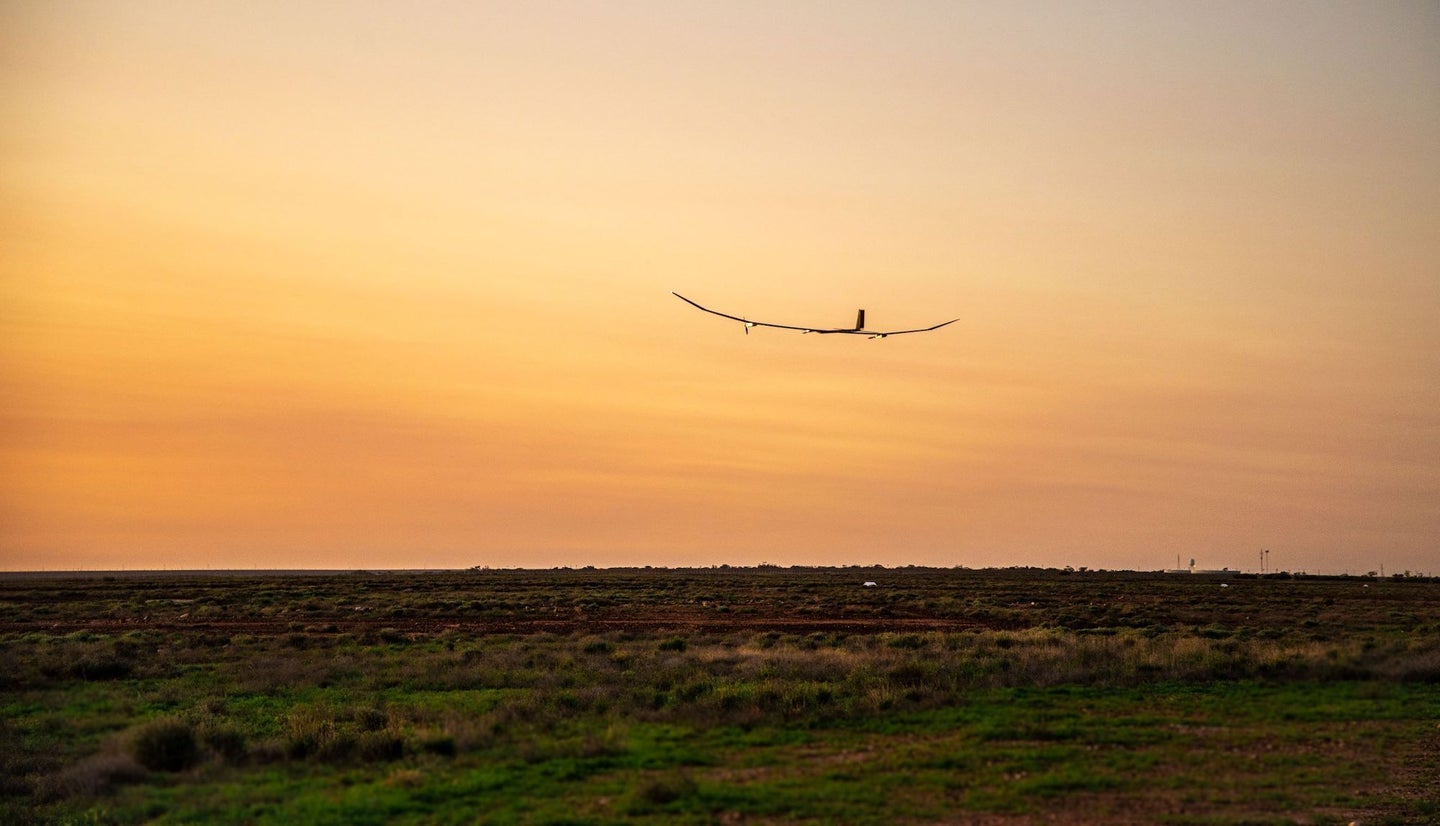 Traditional drones and satellites for military surveillance could be joined by the PHASA-35: a new uncrewed aircraft developed in the UK that flies in the stratosphere— a part of the atmosphere unencumbered by other aircraft or satellites.

“It stays up for a long while and it can look a long way—those are two of the real key attributes for a surveillance platform,” notes Drew Steel, an aviation adviser for BAE Systems, the company that is developing the system after acquiring it from its initial designers at the British company, Prismatic.

PHASA-35 stands for “Persistent High Altitude Solar Aircraft.” The number 35 is its wingspan in meters: that’s 115 feet, as wide as those of a Boeing 737. But the carbon fiber aircraft weighs a mere 330 pounds, which is one three-thousandth the weight of the 737.

The drone is a high-altitude long-endurance (HALE) unmanned air vehicle that runs on solar-powered electric engines during the day, and lithium-ion batteries at night. It’s designed to fly at an altitude of about 65,000 feet in the stratosphere, the layer between Earth’s atmosphere and space. For comparison, a passenger aircraft flies no higher than 42,000 feet. Because the air there is about a thousand times thinner than it is closer to the Earth, the aircraft’s wings have to be extremely long to keep it airborne.

Steel says that “the solar power enables [the PHASA-35] to stay airborne for up to a year and at 65,000 feet, it’s above all the traffic and most of the weather, so it can look a long way.”

The company that designed it, Prismatic, had built two full-sized concept PHASA-35 aircraft. Phil Varty, head of business development for PHASA-35 at BAE Systems, told PopSci at the DSEI exhibition last month in London that it took just two years for the team to take it from a design to its first flight in February, 2020.

That first flight was in the Woomera Test Range, over the virtually uninhabited outback of South Australia. During this test, it operated under full autonomous flight control, and the aerodynamic, propulsion, and power efficiency performed “exactly as expected,” BAE Systems reported.

Then, in October 2020, the aircraft operated for 72 hours (down on the ground) in an environment that simulated the bitterly cold temperatures and extreme pressure of the stratosphere. These tests, undertaken at Prismatic’s facility near Farnborough, just west of London, also allowed the team to practice various in-flight operations such as the transition from day and solar power to night and battery power.

The company expects it to be in service within the next four or five years. “Even if Covid has frustrated some of our test flights, we’ve been continuing to work on the development program and done a huge amount of work on development testing,” Dave Corfield, Prismatic’s CEO, says. “The first true development aircraft is currently being assembled in the UK.”

The fragile-looking aircraft is so light that it can be rolled out onto the runway on its two sets of wheels, each set consisting of two modified bicycle wheels. It has low forward speed, just about 15 to 30 miles per hour. As it gets airborne, it jettisons the wheels. Without wheels, and thus no landing gear, it is lighter and able to fly so slowly that when it needs to, it can land gently on its belly.

“It might get a little scratched and we may have to replace a few parts, but it certainly isn’t damaged beyond repair,” Varty remarks. The ability to get airborne without needing the hugely expensive rockets that are used to put satellites into orbit and the fact that it is theoretically infinitely reusable make this aircraft significantly more cost-effective than a satellite. The PHASA-35 could potentially plug the gap between aircraft and satellite technology.

However, it is not designed to replace satellites, as it can only carry a 33-pound payload, such as a camera, while satellites can carry up to 53,700 pounds into low Earth orbit (99 to 621 miles above Earth) and 8,390 pounds into geostationary transfer orbit (22,236 miles). But it can carry the kind of cameras developed for the military that can have a resolution of 8 inches. That means PHASA-35 could theoretically see (but not read) a book on a table from its perch in the stratosphere! That’s more than enough to observe the movements of people, vehicles, ships or aircraft that might be of interest to the military. But the system is also of interest to civilian organizations that need to monitor something such as an oil leak or forest fires.

“Operating this type of aircraft requires a completely different mindset,” Steel says. “You won’t launch it when you need it, but when you can. Get it up there when the conditions are right and then minimize its energy use whilst it’s on a holding pattern waiting to be given a mission.”

He added that “you’d need several of these aircraft up there, dotted around in different zones, because they don’t fly fast, around 30 mph, so it might take a few days for one to get to its mission position. Once it gets there it will fly an appropriate flight path and it could even be stationary.” He explained that “if the mission is to watch a small patch and there is a 10-knot [11.51 mph] wind, for example, we could slow the aircraft’s speed down to 10 knots and then it would be stationary.”

The prototypes for the PHASA are controlled by ground link, but there will be a transition to beyond-line-of-sight control that uses “satellites as a relay to talk to the airplane,” Corfield explains. He adds that the US-based flight trials planned for this year could not take place because of bad weather. “We had a team out in the USA on a test range in the desert for the summer but never got the climatic conditions to get the stratospheric flight,” he says. The two prototype aircraft have been left in the United States and the team will go back early in 2022 to try again. They’re hopeful that Covid restrictions will be lifted by then so they can return to Australia for further tests.

There are few other HALEs out there. The best known is the Global Hawk, from Northrop Grumman. This US drone, used for surveillance and intelligence-gathering missions, has a wingspan two feet longer than the PHASA—but its empty weight is 14,950 lb and it is powered by an engine that needs fuel.

Watch the aircraft’s first flight, below: