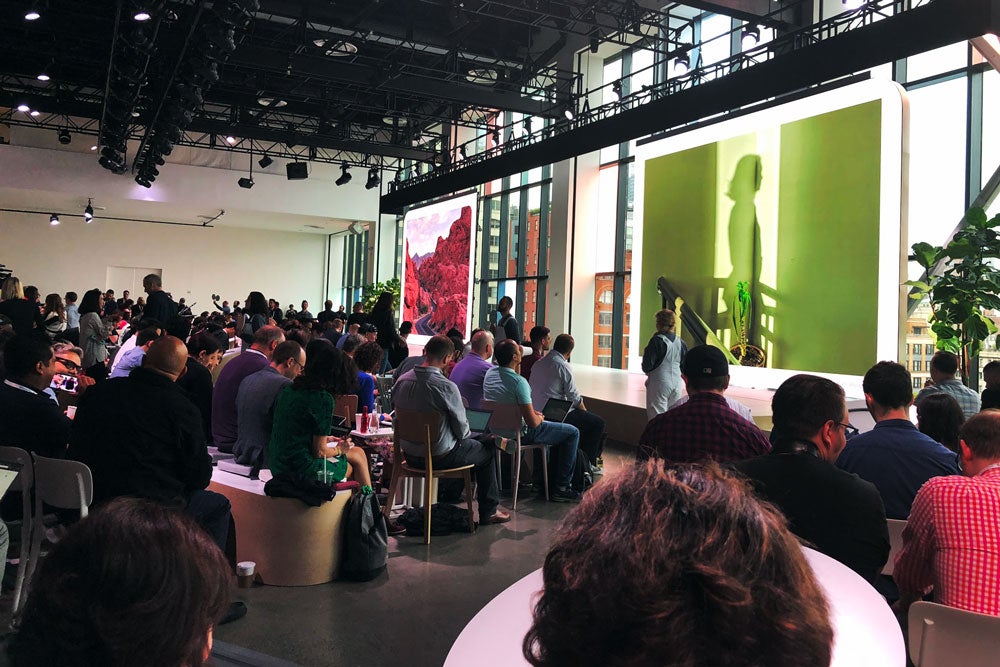 Today, Google is throwing an event in New York City to announce some new hardware, including its Pixel 3 smartphones. We’re here live at the event and will be providing real-time updates about new products—or at least as close to real-time as a massively shared Wi-Fi connection will allow. We’re also expecting some hands-on time with the new gadgets after the event, so stay tuned (and if anyone has any hand sanitizer, can we borrow it? We don’t know what these other journalists have been up to.)

Google’s presentation starts with a joke about how much the new Pixel phones have leaked around the web. That’s pretty standard fare at this point for press events because everything leaks. Hopefully, this means there are some surprises left to learn about during the presentation.

The first presenter is Google’s Rick Osterloh who is taking a very short walk down the company’s 20-year history. As usual, we start with some stats.

Osterloh says hardware is just part of an overall strategy that requires AI, software, and hardware together. He goes on to list three priorities for the companies:

We got a quick overview of the new devices debuting today. Here’s what to expect.

Google is running through the stats on the new Pixel phones really quickly! Both phones have bigger screens than the previous versions. The new Pixel 3 XL display stretches to the top of the device around a notch. The Pixel 3 has a 5.5-inch screen and the Pixel 3 XL has a 6.3-inch screen.

The presenters are already talking about the camera. It’s clearly one of the big selling points on the Pixel cameras, just like the previous version.

Top Shot is Google’s new tech that selects the best frame from a series. It captures a bunch of shots in a row using HDR, then selects the one AI decides is best. Pixel 3 also has enhanced resolution during its digital zoom, which is typically a nightmare on a smartphone. Curious to see how that works.

Night Sight is a low-light photography tech that promises to nix the need for a flash. Machine learning pumps up the shadows on your dark photos in a way that looks cool, but possibly unnatural up close.

The second camera on the front of the phone is a wide-angle selfie camera for getting more details from the background in the shot. The LG V40 ThinQ smartphone recently added a similar feature when it was announced last week. it’s meant for group shots.

Playground is a new AR app that allows you to put characters into selfies with you. You can dance with a digital Donald Glover or Iron Man.

Call Screen answers the phone for you, then asks who is calling and what it’s about and provide you with a transcript of the answer. It sounds useful and will probably be the only way I use my phone if it works.

Chrome OS now lives inside a tablet that’s designed to be as powerful as a Chromebook, but thinner and lighter. The screen has 293 pixels-per-inch of resolution. It uses a new screen tech that we’re interested to dig into. Google promises more efficient performance despite a high pixel count.

It has dual front-facing stereo speakers that are tuned specifically for the device. It comes with three free months of YouTube TV to get you hooked.

Pixel Slate has two 8 megapixel photos, one on the front and another on the back. Both use portrait mode thanks to Google’s AI tech. The front-facing camera is designed for video chatting. The cameras make this thing look different than a Home Hub ripped off of its base.

Obviously, Google Assistant lives inside. Get used to that.

The Pixel Slate keyboard snaps onto the Slate itself and works like the iPad keyboard cover. The rounded keys are backlit and it has a trackpad like you’d expect on a laptop.

The Slate starts at $599 and the keyboard will demand another $200 on top of that. It’s $100 more again if you want a Pen stylus to go with it. That’s a step up from the Microsoft Surface and regular iPads.

The wireless charging stand for Pixel 3 sets the phone into a special mode that essentially turns it into a mini Home Hub. It works as an alarm clock (that changes color to mimic a sunrise to wake you up) and shows you photos like a digital photo frame.

Yesterday, Facebook jumped out into the market with its new Portal devices, which have a screen, camera, and microphone for video calling. Now, Google is rolling out its own smart speaker with a screen called the Home Hub. Unlike the Facebook Portal, this device doesn’t have a camera at all. That’s a big differentiator and Google says it’s about security and feeling good about putting it in your bedroom.

It comes in four colors and the screen automatically adjusts the brightness of its screen to the ambient light in the room so it doesn’t nuke your eyes in a dark room.

Google wants Home Hub to be a YouTube machine that helps you learn skills with how-to videos you can call up with your voice. It’s cool, but it’s how a lot of people already use their phones.

Home Hub has a downtime mode, during which it won’t respond to anything except things like alarms. You can set the times yourself as part of its emphasis on use control.

The new hardware comes with a redesign of the Home platform itself called Homeview. There’s a new dashboard that allows for easy access to gadgets. The Home mobile app now matches the Home Hub interface. Google says the system plays nice with 200 million devices from 1,000 brands. Nest is obviously the most compatible.

Lastly, the Home Hub works as a digital picture frame. This has always been one of the saddest segments of the electronics market despite the fact that it’s a pretty good idea. The Home Hub uses machine learning to filter out your crummy, blurry photos and tries to show you the “best” images in the bunch.