HUD tech keeps getting better. Here’s what Volvo could have in store for drivers someday. 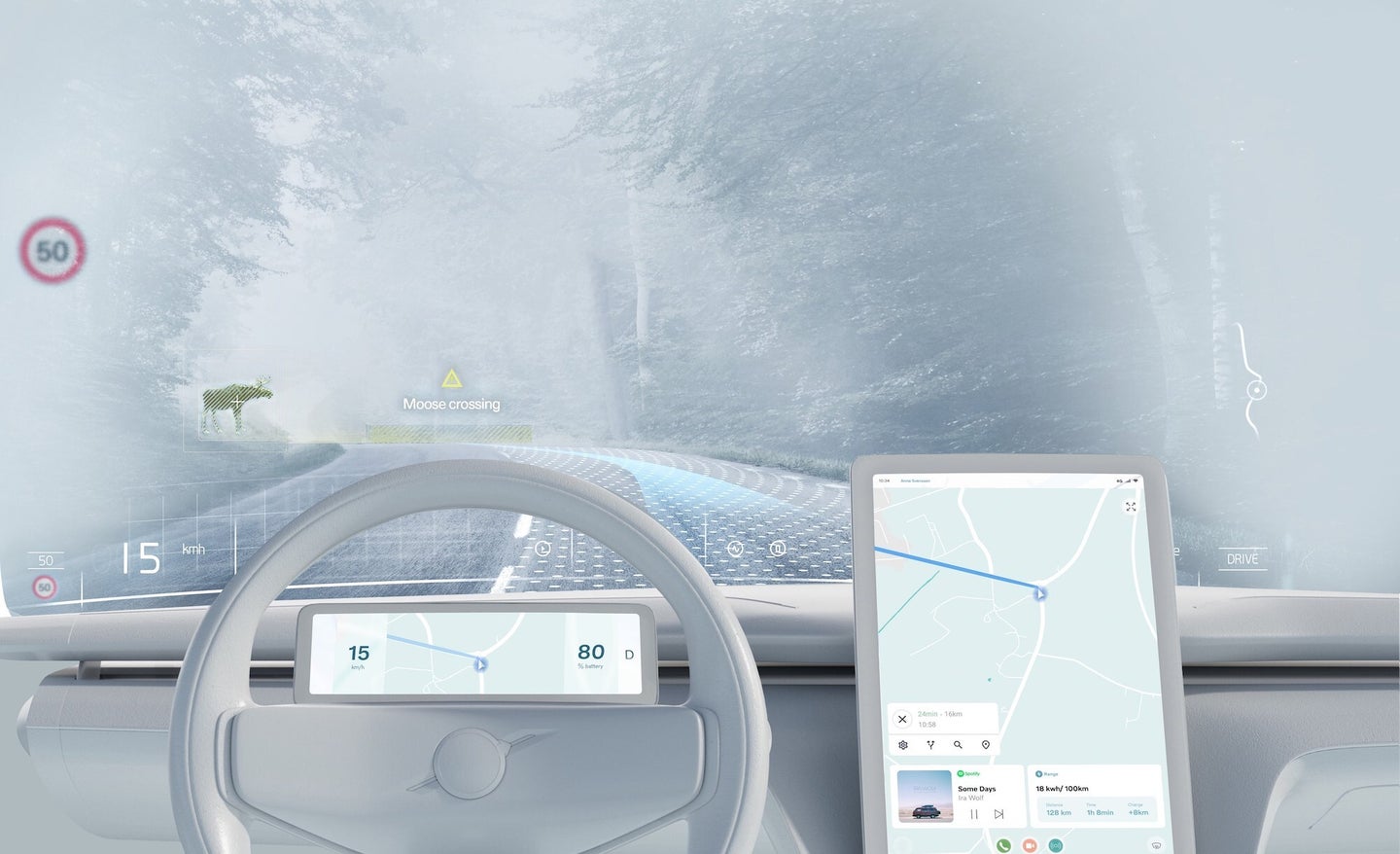 Dating back to its invention of the three-point seatbelt in 1959, Volvo has spent the better part of a century building up its reputation as one of the safest names in the automotive industry. Today, the automaker is still cruising down that same lane by committing to outfitting its upcoming cars with some of the most advanced driver-assistance sensor suites in the industry as standard equipment.

One way to keep drivers safe is by ensuring their eyes stay on the road. Volvo’s newest investment in Spectralics, an Israel-based tech firm, looks to ensure that the driver’s eyes almost never need to leave the road by transforming the entire windshield into a dynamic display of information.

[Related: The coolest car screens and displays from CES]

Spectralics’ tech works by overlaying the windshield with a thin film called a multi-layered thin combiner. This effectively turns the entire windshield into a transparent display, enabling Volvo to superimpose graphics and other visual elements onto the driver’s view of the roadway, functionally transforming the glass and surrounding environment into an augmented-reality display.

“Spectralics is an exciting company with technology that holds truly great promise,” said Henrik Green, Volvo’s chief product officer. “By supporting their development, we can bring forward the potential their products could have in future Volvo cars.”

As an option on many of its cars and SUVs, Volvo presently offers a Head-Up Display (HUD) to place information directly on the windshield. This is generally achieved by using a projector and series of mirrors, allowing the automaker to place relevant information within the driver’s field of view on the windshield rather than on an infotainment screen or gauge cluster which would require the driver to glance away from the road.

Believe it or not, the HUD has existed for decades. General Motors was the first automaker to widely implement the use of a rudimentary HUD, a concept which it had been working on since 1965. However, it wasn’t until the late 1980s, following GM’s acquisition of defense contractor Hughes Aircraft (which held patents regarding early HUD functionality), that the automaker was able to launch a vehicle with a working HUD.

Early examples displayed digital speedometers, turn signals, and other basic information. The HUDs of today are akin to a technological marvel compared to the 1980s—they can display virtually limitless information about the vehicle, turn-by-turn direction, music, and much more.

While far from standard equipment, HUDs are frequently found in top trims for vehicles like the Volvo XC90, Honda Accord, and the GMC Sierra. Other cars, like the new Volkswagen ID3 and ID4 use a more advanced HUD that allows for more display real estate on the windshield, but is still limited in size by the projecting display.

The downside, however, is that HUDs are often quite small and limited in placement due to cost and technological restraints such as parallax (a perception issue that stems from where the HUD’s image is placed on the windshield relevant to the driver and passengers). The unit that generates the information is typically built into a car’s dashboard, and then projects the images and data upwards onto the windshield as a reflection.

In contrast, Spectralics’ solution would be able to place information anywhere on the windshield, and use supporting technology like forward-facing cameras to detect obstacles, street signs, roadways, and more objects in the real world, and then outline them on the windshield so the driver is sure to see them.

It’s worth noting that Volvo has previously patented HUD-based tech that never quite made it to production—at least not yet—but did look good on paper. In other words, Volvo’s investment into Spectralics isn’t a guarantee that the startup’s tech will make it into future cars, but it aligns with the automaker’s goal of vehicle safety. Should that tech come to fruition, the entire idea of how the world looks at in-car displays could even change.