Our favorite science long reads of 2021

Our staff's top picks for stories are worth a first (or second) read. 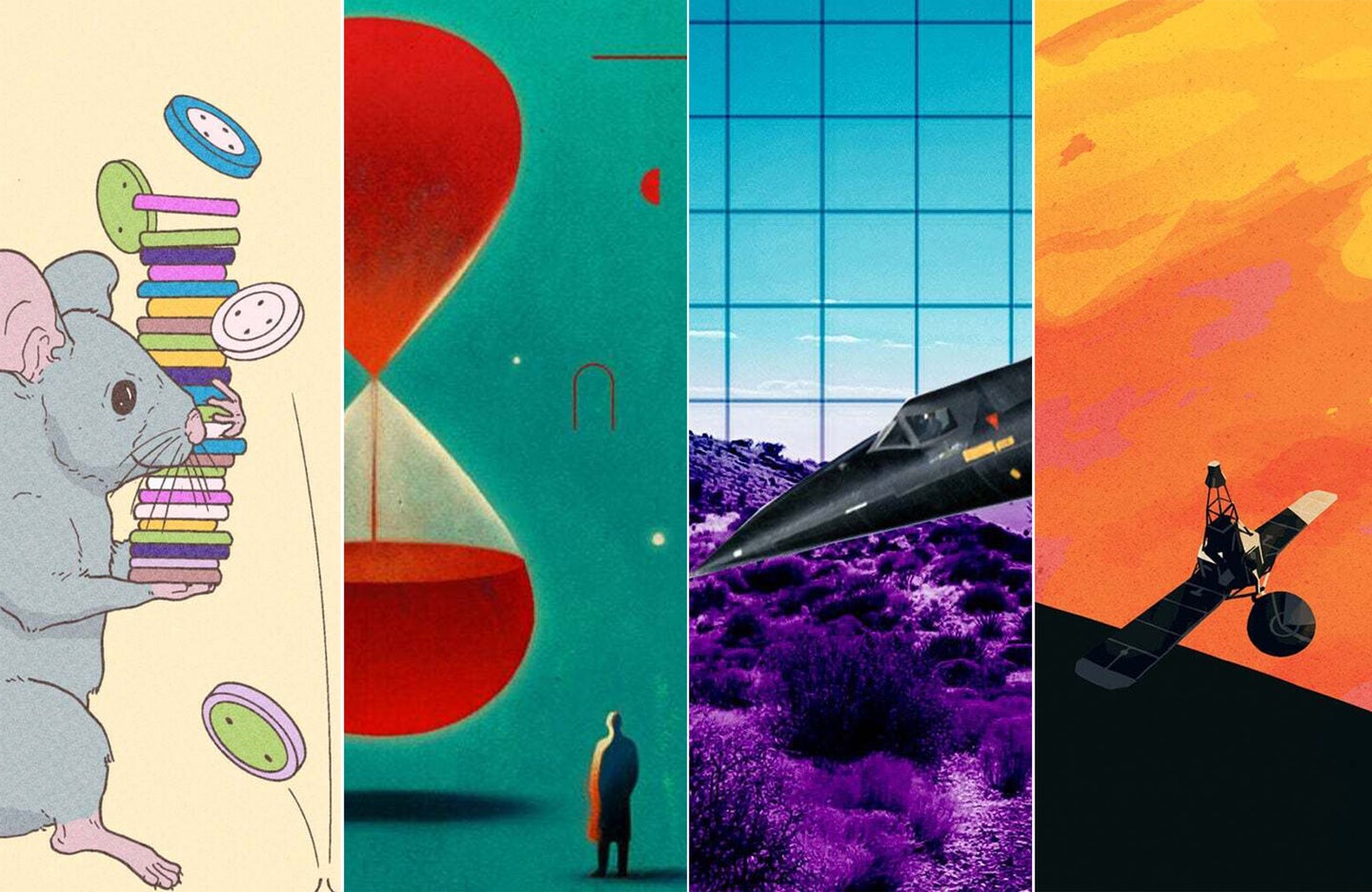 Over the course of each trip we take around the sun, the Popular Science staff produces thousands of stories, from breaking news to meaty features. Some of those tales stick in our heads for the long haul, and this year was no exception: These yarns, which include a decades-long quest to uncover a missing spyplane and a search for the fountain of youth, all dig deep into little-known truths about our world. Below are some of our favorite stories, including a few from our network of sibling publications, from the last year.

[Related: The most compelling military tech stories from the land, air, and sea this year]

A CIA spyplane crashed outside Area 51 a half-century ago. This explorer found it.

“For years, Ray’s crash sites remained largely hidden from the public. But in the late 1990s, an explorer named Jeremy Krans began what would become a decades-long quest to uncover it all, and ultimately to make Ray’s once-classified life public. ‘I felt that we needed to do something,’ he says, ‘because nobody knows who the hell Walt is.‘”

“For the locals who’d been advocating for the Gorge’s designation upgrade, it was a long-awaited victory. Those folks include small-town business owners, life-long residents, kayakers, rafting guides, fishing guides, and yes, some local hunters and anglers. Apart from wanting to protect the New River Gorge indefinitely (ever hear of a national park that got sold to the highest bidder?), all those folks largely had the same goal: to attract more people to the New River Gorge.”

An all-American cheese from the Atomic Age

“Nuworld cheese is an American cult classic. Born out of nuclear research over 70 years ago, only the most devout of turophiles and science history buffs have even heard of—let alone tasted—the stuff. But despite its low profile, the wonderful weirdness of this biologically fascinating wheel makes it one worth seeking out.”

Can tripping on ketamine cure PTSD? I decided to try.

“I feel woozy and relaxed, and the vague patterns of light and color I’m used to seeing when I squeeze my eyes closed are more vivid than usual. Still, all I can think about is that I’m supposed to be viewing my trauma with a new lens: seeing what I did and what was done to me from some great protective height. Turning inward will, I hope, empower me to banish whatever monsters I might find there. But right now, all my inner self has to say is, I am probably doing ketamine wrong.”

These scientists spent decades pushing NASA to go back to Venus. Now they’re on a hot streak.

“Venusophiles say it’s embarrassing that we haven’t gotten to know our neighbor better. Magellan, NASA’s last expedition there, left Earth in 1989. Since then, the space agency has launched 14 missions to Mars while researchers submitted about 30 Venus proposals to no avail. VERITAS was already in that ignominious club of the unchosen; earlier iterations had been put forward for more than a decade. During the last round, in 2017, VERITAS and DAVINCI, a very different Venus project aimed at sampling the planet’s noxious atmosphere, had been part of a five-team Discovery shortlist, but hadn’t made the final cut.”

A simple blood test could save new mothers. Why aren’t more doctors using it?

“The CDC has named ‘missed or delayed diagnosis’ as a key factor behind maternal deaths, and cardiologists and OB-GYNs admit that PPCM is often misdiagnosed or ignored. Symptoms like shortness of breath, extreme fatigue, and swelling in the feet and legs can mimic normal pregnancy discomfort, causing patients and doctors to miss the warning signs. But many survivors say that health care providers dismissed their concerns and neglected to order cardiac testing, including a simple blood test that can indicate heart failure. These missed opportunities are especially critical for PPCM patients, as their hearts can grow weaker by the day. Research has shown that the earlier people are diagnosed with PPCM, especially during late pregnancy or the first month after delivery, the more likely they are to recover.”

“As Mariusz Stepien mounted a small rise in the middle of the meadow that summer day, his headphones filled with a clear, high tone—the strongest he had ever heard. Kneeling in the thick grass, he lifted a rock the size of a loaf of bread, then began clearing loose soil underneath with a small paintbrush. After a few minutes he plucked something green, round, and hard out of the dirt.”

We are all suffering in silence.’ Inside the US military’s pervasive culture of eating disorders.

“Rachel Dyal is not alone among US military service members who have leaned on harmful or unhealthy habits in order to maintain ‘body composition standards’ that trained dietitians and health experts say are antiquated and have no bearing on physical fitness. While experts agree that there should be fitness and health standards for service members, they say the existing standards don’t accurately measure those things.”

What’s in a packrat’s petrified pee? Just a few thousand years of secrets.

“This is where the packrat’s story takes a turn. If you could add up the value of all the trinkets these animals have been accused of filching over the years, the sum would pale in comparison to what scientists say the rodents and their kin have started to give back—one sticky, stinky midden at a time. For around half a century, paleoecologists have been working on using their collections as miniature time capsules to tease out ecosystems long past.”

Has the fountain of youth been in our blood all along?

“In a series of studies over the last 15 years, Villeda and others in a few like-minded labs at places like Stanford and Harvard have shown that, when infused with blood from young mice, old ones heal faster, move quicker, think better, remember more. The experiments reverse almost every indicator of aging the teams have probed so far: It fixes signs of heart failure, improves bone healing, regrows pancreatic cells, and speeds spinal cord repair. ‘It sounds sensational, almost like pseudoscience,’ says Villeda. It’s some of the most provocative aging research in decades.”

“To make all this happen, the team had to remove vegetation from the middle of the road and cut back bushes—but also while being mindful of not disturbing how much nature had already reclaimed the base. Giant, open manholes everywhere—’big enough to happily swallow a Bentley wheel,’ Sayer added—had to be closed and secured. They built small concrete ramps to connect all the different sections of the course.”

This historic Brooklyn cemetery shows us a future without lawns

“There are upwards of 144,000 cemeteries and graveyards in the US, according to one NASA cartographer; they cover 4,300-plus acres of New York City alone. With all that ground, there’s plenty of room to test out lawncare techniques that break with the century-and-a-half tradition of over-pruning, overwatering, and over-fertilizing open spaces. A strategic, yet laissez-faire approach, as more research is finding, can save resources and help mitigate human impacts on local wildlife and climate change.”

“There’s still a lot we don’t know about how pythons got to South Florida. Although a popu­lar theory states that Hurricane Andrew destroyed a large breeding facility in 1992, releasing tons of snakes into the wild, no one seems to know the name of it or where it was. Most likely, individual pet owners released their snakes into the glades when they got too big, and those pets multiplied into tens or even hundreds of thousands of animals in the ensuing years. Death by a thousand cuts.”