An interview with Emmanuel Lubezki, cinematographer of 'Birdman' and 'The Revenant' 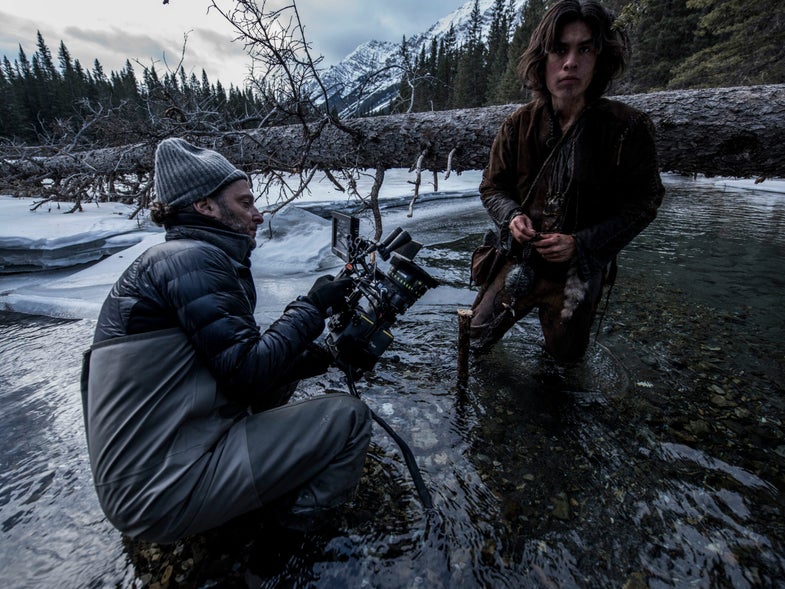 The Revenant, which opens in select theaters on Christmas Day before debuting nationally in January, is Oscar-bait.

A-list actors? Check (Leonardo DiCaprio and Tom Hardy). Director a creative genius? Ditto (Alejandro González Iñárritu, who directed Birdman or (The Unexpected Virtue of Ignorance), Compelling tale? In spades. (DiCaprio plays the real life Hugh Glass, a 19th century fur trapper mauled by a bear in the Dakotas and left for dead. He survives and crawls and stumbles his way to civilization to avenge the murder of his son.)

What makes the film so lush, however, is the cinematography, and that credit goes to Emmanuel Lubezki.

Lubezki is in the midst of the greatest run ever achieved by a cinematographer. No other cinematographer has won three straight Oscars, and Lubezki, who won the golden bald figurine for his work on Gravity and Birdman, is the frontrunner for yet another Oscar (and the record) thanks to his sky-scanning, wide-lens portrayal of Glass’s journey and his environs. Lubezki spoke to Popular Science about the physically taxing shoot, the decision to shoot digitally, and why Birdman had to be made before The Revenant could be shot.

The Revenant was filmed exclusively using natural light. What difficulties did that pose?

There are methods to predict light now. You can do it with an app, and tell where the sun will be at a certain time. But we also had to be there and photograph the locations repeatedly every time before we shot to truly understand how the environment would look.

When you bring up natural light, though, it sounds like I didn’t do anything. But I had to prep so much more. The extra work was more satisfying in its complexity, and the payoff is bigger than anything we would have shot with artificial light. By not using artificial light, I could use a wide lens and photograph these big expanses of the environment.

With Alejandro, we did extensive rehearsal for a month. It was like a play. We didn’t rehearse all of the movie, but between 60 to 80 percent of it [was rehearsed]. The choreography of it was similar to a music director setting the instruments and the tempo.

That had to give you enough time to map out how you wanted to film, right?

One of the big developments of this film was the use of the Alexa 65, the recently introduced large format 65mm digital camera. I am interested in your thoughts of shooting solely digitally.

Alejandro and I are both filmmakers, and we have been doing this a long time, so we love film. And we thought of using film cameras at one point, but when we started comparing what we were getting with digital cameras, and the flexibility of how late we could shoot — we could shoot at all hours of the day and capture the environment in ways we couldn’t with film. We were stretching the camera is ways that were impossible with film.

Film has texture, and a grain that a lot of cinematographers love, but I didn’t want to have any of that in this movie. I wanted The Revenant to feel like an open window with no texture between the screen and audience. I didn’t want a barrier to exist, so soon after we started filming, we sent the film cameras back to Hollywood, and we did the whole movie with digital and wind lenses with a close focus so I could do these extreme close-ups with the actors.

That also extended to nature, right, which was also a character?

Yes, of course. Nature was very much a character in the movie. When you are describing and telling a story about survival in nature, you have to pay attention to how nature is determining the state of things. You have to show the beauty of nature and its roughness, all of these contradictions and how complex it is. We wanted to show how nature doesn’t care about the little issues that the trappers can have. The rivers still flow, and the clouds still move, and the trappers are just a tiny part of that story.

Weather determined every scene we shot, and how we could shoot. It was constantly affecting us. When you shoot like that, everyone is aware of nature and what is happening. Every single scene was just incredibly difficult. Just to get to the location, sometimes it took 20 minutes to walk there. You are exhausted and you take a layer of clothing off. You are trying to conserve energy, and survive in these elements, and you don’t want that energy to go into filming something that doesn’t make the movie.

Did you scout out locations? I assume you would want to ‘audition’ the elements.

We decided to film in two locations [Canada and Argentina]. When we started doing all of the scouting, we were very extensive. We drove more than 10,000 miles, and found that we couldn’t do it in America because the nature was just decimated. Rivers were dammed, all of them, and the forests have been cut and replaced with farmland everywhere. It was a sad situation. We went to Canada, then, and there is a little more left, and it was still accessible. We didn’t want to shoot at the end of the world.

Once we found the areas we wanted to shoot, we started walking a lot. We — Alejandro, myself, and Jack Fisk, the production designer and who is a master — walked for months. And in those walks, we learned to understand how Alejandro wanted to do the movie, and the ideas and feelings he wanted to capture.

Jack found every location, and was able to find locations that are specific to the journey of Hugh Glass. Jack is an expert on nature and American history. All of these locations are charged with different emotions. Depending on the time of the day and the light and the elements, they would help Alejandro create this atmosphere. 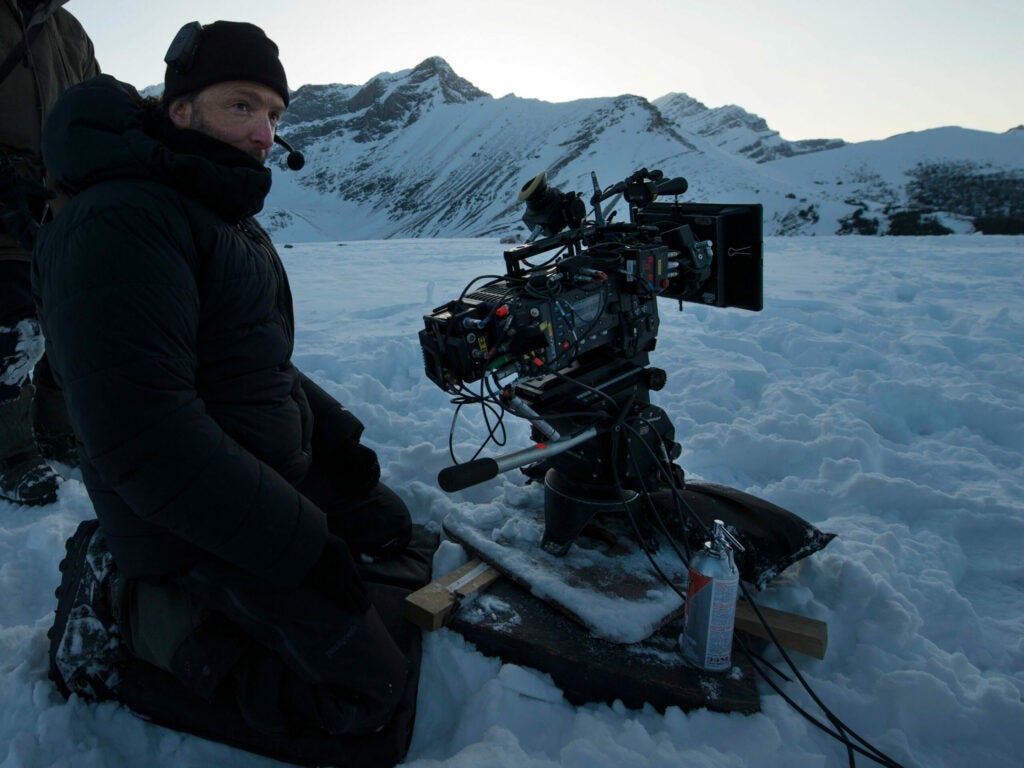 Lubezki waiting for the perfect light to shoot a scene in The Revenant.

How did you get involved with this film, after Birdman?

A year before Birdman, we started to talk about The Revenant in terms of, conceptually, what was the idea Alejandro wanted to tell. What was Alejandro’s story. We also were talking about the logistics of making a movie in the wild, and why we thought it was important to not film in stages. We wanted to bring the actors to nature for real.

Once we decided we wanted to do the movie in real locations, it was too late in the year to start the film. We wanted to start in the fall, and see the incorporation of weather into the winter. But it was too late, and the movie fell apart. A month after, Alejandro said, ‘I have this other story I would love for you to read.’ A script he had been working on for a while.

All my life I wanted to make an adventure movie, something like The Revenant, and to go from The Revenant to Birdman, a movie about the show business and build into stages, it wasn’t appealing to me. It was quite awful, and to film it all in one shot, I thought I really didn’t want to do this.

But then I had a true meeting with Alejandro, and his energy and his vision are so powerful that in one second, I was in. I said I am dying to do Birdman.

Do you feel it was necessary to do Birdman before The Revenant?

It worked so much better. I needed the time spent with Alejandro. The Revenant is an incredibly complex movie that doesn’t appear complex. It is a film with little dialogue — very little is said because Alejandro trusts the audience. He has complete respect for the audience. He doesn’t have to feed everything to them. He doesn’t have to explain everything. Alejandro can create atmosphere and moods to express emotions, and Leo doesn’t have to explain how he feels — he can just show how he feels. And that is uncommon these days in Hollywood.

Cinematography is used to illustrate dialogue, but Alejandro wants to use all the tools at his disposal to create a world. And he can only do that because he is a gifted director.

What were the differences, then, between filming the two movies? In your approach to filming both?

They were in their own way challenging. When you work with Alejandro, you feel that you are walking a tight rope. You are close to the cliff, and about to fall. You don’t know if what you are doing will work or not. He does stuff that I have never seen. He is truly pushing the language of filmmaking to another place. It’s hard to talk about him because I am so proud of him.

But back to your question: it was very clear that each movie had to have its own language. We couldn’t apply the formula for Birdman to this one, or Gravity, or Y Tu Mama Tambien. We have to find the specific language for each movie. We knew we wanted to get through this trip, this incredibly difficult journey because we wanted that to inform the movie. Transpire into the movie.

It’s not unlike shooting the jungle in Fitzcarraldo [a 1982 Werner Herzog film], the energy in those movies you don’t see in movies made today. The actors in front of green screens and everyone drinking coffee. It is impossible to achieve the level of naturalism that Alejandro wanted to express.

Much has been made about the film’s schedule, which was shot in chronological order but also suffered delays and lasted for nearly a year.

We just finished, actually. I am always the last one to finish. I want to put the final touches on the color. We did a couple of DCPs [digital cinema packages], for the screens for new laser projectors, for IMAX, for Dolby. Different versions will come out, and each will have their pros and cons.

At the screening I attended, you received a standing ovation when your name flashed in the credit.

That is wonderful. Thanks for telling me.