DARPA Wants A Fast Cargo Drone That Can Land Anywhere

This airplane has a lot of fans 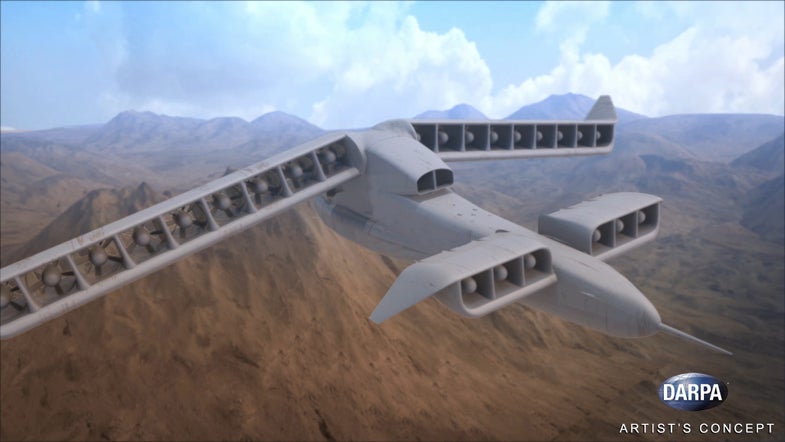 In their quest for the perfect aircraft, scientists at DARPA keep crossbreeding airplanes and helicopters. The perpetual goal is a best-of-both-worlds aircraft, which can take off vertically, hover, switch its thrust from perpendicular to the ground to parallel, fly like a plane, and then switch back, landing vertically again. The V-22 Osprey employed by Marine Corps and the Air Force is probably the best-known of these VTOL aircraft. DARPA wants to do better, and to make that happen, it’s enlisting some fans.

Dubbed LightningStrike, this latest vehicle concept is Phase 2 in DARPA’s X-Plane program. The ultimate goal: an unmanned plane that can fly 460 mph, efficiently hover, and can carry at least 4,800 lbs of cargo while weighing no more than 12,000 pounds. Oh, and it uses 24 electrical fans. Twenty-four.

Powering those fans is a turboshaft engine, like that used in the V-22. The wings and front canards will all tip upwards to lift off the ground, not unlike NASA’s own multi-rotor electric VTOL plane.

Last week, DARPA awarded the contract for the next stage of the craft to Aurora Flight Sciences, the company that previously took a drone concept from design to 3D-printed reality in just 9 months. DARPA wants to see flight tests of the LightningStrike by the end of 2018.

It’s an ambitious goal, but if anyone can do it, the engineers at Aurora Flight Sciences seems like they might be the right ones for the job.

Watch the concept video below: