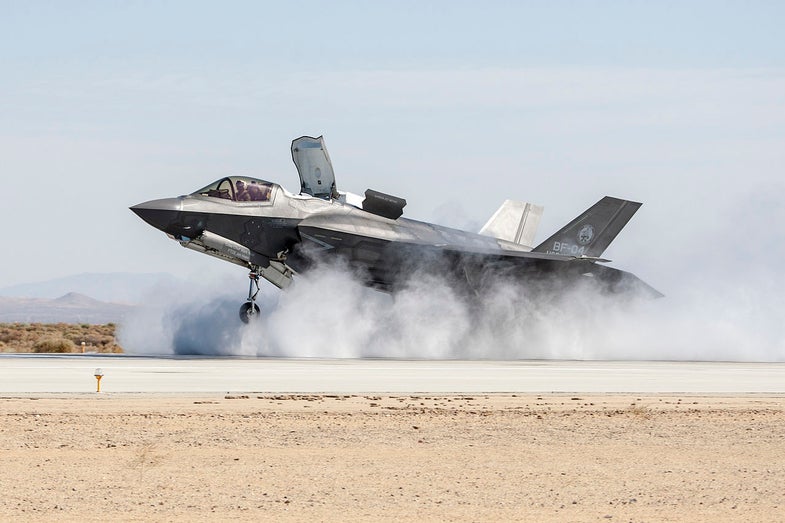 The F-35B is the most expensive model from America’s most expensive fighter program in history. Stealthy, full of sensors, and designed so that the Marines flying it can take off and land vertically or in very short distances, each plane is a $134 million bundle of metal and code. What more could the Marine Corps want with its new jet fighter?

The military is working on laser weapons (with some of the earliest work dating back to the 1970s), and every service in the Pentagon is currently working on some form of new directed energy weapon, with the Navy having deployed on in 2013 and everyone else expecting to field lasers in the 2030s.

Right now, military laser weapons are good enough to burn a hole in a drone or through the hood of a truck, if pointed at the target for a long enough time. Two big hurdles stand between the lasers of now and laser-war of the future: power, and size. Lasers need to draw more power to be more effective, and that that means a large power supply. Ship power plants can support a laser, and trucks can be hooked up to more power on the ground for more powerful beams.

But fighters are, by definition, small airplanes, which means the laser needs to be just as strong with a smaller power source. That’s at best a decade of work that has to happen for Lt. Gen. Walsh’s “As soon as we could miniaturize it” statement to bear fruit, though defense companies, like F-35 maker Lockheed Martin, are working on it.

In the meantime, what will the F-35B do? In 2018, the Marine Corps expects to deploy F-35Bs on the amphibious assault ship Essex, which is essentially either a very short aircraft carrier than can deploy landing craft, or a very large landing craft transport with a flat top for airplanes and helicopters. On that tour, the Essex is expected to head to U.S. Central Command, which is the division of the military that oversees fighting in the Middle East.