The crew at Riley's Rebuilds works out of a garage and handles about 20 carburetors a week. Here's how the repair process works. 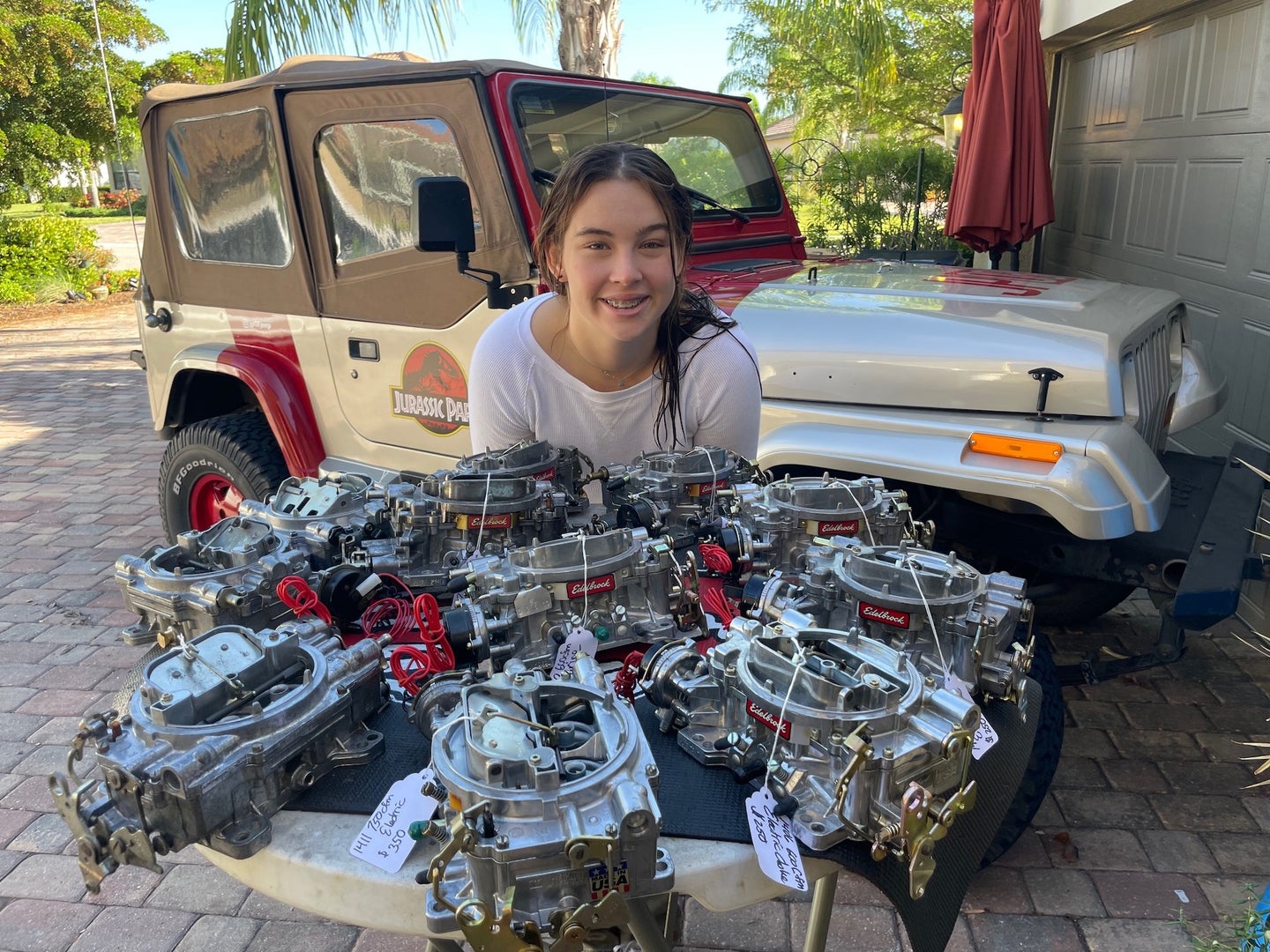 Carburetors may represent old-school tech in the automotive world, but don’t tell Riley Schlick, a high school senior in Florida who rebuilds them for a tidy profit. Send your tired, dirty, mucked-up carburetor to Schlick and she’ll return it to you clean, shiny, and ready for duty once again. She has operated her Bradenton-based business, Riley’s Rebuilds, for three years now, and a steady stream of carburetors has crossed her path.

At first, Riley’s Rebuilds was a way for 17-year-old Schlick to buy her first car, which had to meet her parents’ specifications: It needed to have a manual transmission and a roll bar. Within a few months, she made enough money to buy a Jeep. Then, she brought on four friends to work with her. That hiring spree solved two problems, in Schlick’s mind. Her friends make more money rebuilding carburetors than they would working a minimum wage job, and they get to spend time together.

She learned how to do the work from her dad. “I said to her, ‘You can get a job at Publix or I can show you how to do some restoration stuff in the garage,” says Schlick’s father, Dane Trask, who rebuilds classic cars as a hobby. He showed her how to do it, and also made use of some YouTube tutorials. “She picked it up quick,” he says.

[Related: At $1,807, the Honda Navi is the perfect starter motorcycle for a beginner]

Once a vital piece of equipment for cars, carburetors regulate the fuel and air ratio for internal combustion engines. In the same way that fires need oxygen to burn, engines require air to create the chemical reaction that propels the vehicle forward. In its simplest form, a carburetor (or “carb” for short) is a device that takes in air from one end and forces it through a narrow section that causes the air to speed up and the pressure to drop, too. As a result, the falling pressure creates a vacuum that sucks in air and fuel through another hole in the side. (Since the 1980s, carbs have been replaced by fuel injection, and now, the industry is moving towards electric vehicles.)

A carburetor’s combination of pipes and crevices tend to accumulate dirt and impurities, which creates performance problems like stalling, flooding, rough idling, and decreased fuel economy. Chemical carburetor cleaners sometimes addressed the issues, but not the way a full rebuild can. That’s where Riley’s Rebuilds comes in.

Schlick and her staff—her school friends Dagny, Katie, Amelia, and Elaine—unbox carbs that arrive in the mail and first determine if it’s a donation or a rebuild. She says that now that her business has attracted some attention and started to grow, people from all over the country are sending their carburetors to Riley’s Rebuilds as gifts. She cleans them up and resells them at local auto events.

Once the origin of the carb is determined, Schlick and the team document the model number and CFM rating (cubic feet per minute) and get the device ready to break down. Each carburetor has eight screws on top, Schlick explains, and they remove the hat and the floats (those work similarly to a float in a toilet tank, regulating the fuel level). Out comes the choke, which controls the air intake, and all the springs, screws, and bolts inside.

The team takes the screws and bolts and tosses them into a tumbler for about 20 minutes. Next, they soda blast the body, which harnesses tiny baking soda fibers to remove the dirt and grime. Then they transfer the parts to an ultrasonic tank, and blow out the ports with an air compressor to clear any remaining soda bits.

“We use soda blasting instead of sand or glass because it’s not super aggressive,” Schlick said. “The soda doesn’t get stuck in the carburetor like other materials would.”

Once the gunk is gone, they dry the carburetor thoroughly and put it back together again. On average, Schlick said, the team works on 20 or more carburetors a week.

Riley’s Rebuilds charges $145 and up to rebuild a carburetor and send it back to its owner, depending on the model, year, and how clean they can get it. They’ll even clean up a marine carburetor, which costs more in the $300 range.

“Carbs look complicated and difficult, but they’re not,” says Trask. “From a business standpoint, it’s a forever growing market for her and for younger kids.”

At this rate, Schlick and her friends aren’t going to need a minimum wage job any time soon.

“It takes about an hour to 90 minutes to rebuild one carb,” Schlick says. “With our system, we have one girl breaking down, another soda blasting, and another building, so we’re hitting several at a time. They go from all grimy and sticky to shiny and clean.”

For more information, check out Riley’s eBay and Facebook pages.